The 20th Century Rise of the Confederate Soybean 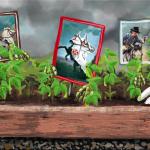 If you were a devoted reader of Soybean Digest in the middle decades of the last century—likely a farmer who was either growing soybeans or seriously considering it—you might have witnessed a quiet invasion taking place on the series of maps printed in conjunction with the magazine’s annual review of new soy cultivars.

Cultivars, or “cultivated varieties,” are variants of domesticated plants adapted to specific uses, climates, and soils. Soybean Digest printed the names of varieties recommended for specific locations over an outline map of the U.S. that extended far enough west to include a corner of Texas.

Unlike names for apples or other public-facing produce, the names for soy cultivars were not intended to entice consumers with appetizing imagery. Instead, they were a pragmatic means to keep a wealth of genetic lineages straight: single proper names chosen, it often seemed, for reasons known only to the breeders. What to make of “Clark” and “Kent,” often recommended for neighboring counties in the North? Or, in the South, such varieties as “S-100,” “CNS,” and “JEW 45” (bred by South Carolina farmer John E. Wannamaker, who lent his initials)?

There were, however, discernable shifts in naming practices. In the early 1900s, when the USDA began taking an active hand in importing thousands of samples of soybeans from Asia and sorting them into cultivars for American farmers, names indicating geographic origin, such as “Peking,” were common. By the late 1940s, names like “Mandarin” and “Hongkong” had become increasingly rare. Breeders instead chose names for soybeans, still widely regarded as a “botanical immigrants,” that more firmly rooted them on American soil. Northern breeders favored the names of presidents—“Adams,” “Madison,” “Lincoln”—and tribal nations: “Chippewa,” “Blackhawk,” “Ottawa.” Southern names of the time included “Arksoy,” “Volstate” (for Tennessee, the Volunteer State), and “Pelican” (in honor of South Carolina’s state bird).

These practices were inconsistent, though, next to one that emerged in the South in the mid-1950s that embodied a very specific regional identity. Somehow, a century after losing the Civil War, Confederate generals had returned—at least on the inside pages of an obscure trade journal. A new form of geographic identity was appearing in the South, beginning with a smattering of “Jackson” and “Lee” cultivars. By the last map of the series, in 1966, the rout of older varieties was nearly complete. They were crowded out by “Hood,” “Hill,” “Hampton,” “Stuart,” “Bragg,” “Hardee,” and “Pickett.”

This was not simply an invasion on paper. It pointed to a dramatic transformation of Southern agriculture, in which new soybean varieties played a major role once held by cotton. It was also a vivid indication of how this transformation largely excluded African Americans sharecroppers, who were being actively pushed off the land.

As much as the Confederate cultivars reflected large structural forces at play, they were largely the work of a single man, responsible both for the painstaking scientific work it took to breed them and for the choice of this particular naming practice.

Edgar E. Hartwig was not a born Southerner. He grew up in Minnesota and received his Ph.D. in agronomy from the University of Illinois. He joined the U.S. Department of Agriculture (USDA) in 1941. Founded in its current form during the Civil War, the USDA was tasked with conducting research of direct benefit to American farmers, often in cooperation with state agricultural research stations. In 1948, Hartwig was assigned to oversee the cooperative soybean breeding program for 12 Southern states: the 11 former Confederate states, plus Oklahoma. The North/South divide in cultivar breeding was not unusual. Soybeans, like many crops, are sensitive to conditions that vary markedly from north to south, such as summer daylength and the length of the growing season. An unintended consequence: soybean breeding did rather precisely map onto American sectional divisions.

Hartwig’s outsized influence on Southern soybeans was, in part, due to his consummate skill at the exacting and time-consuming technique of backcrossing. Previous generations of American soy breeders had largely focused on sorting through existing lineages from the rich genetic heritage of Asia to find those well adapted to the country’s needs. Backcrossing was a more active form of breeding, in which two variants were mated, and then one was bred with successive generations of the resulting crosses until the other’s contribution was diluted to a small cluster of genes or even a single desirable trait.

This ability to mix and match genes was crucial for the success of soybeans in the South. Earlier in the 20th century, existing cultivars in the region were generally short and bushy plants, grown for hay. Increasingly, however, the real money in soybeans was coming from growing beans that could be processed into oil and animal feed. This required plants tall enough to be harvested by combines, pods not easily shattered by mechanical harvesting, and high yields of long-maturing beans rich in fat and protein. Northern cultivars had these traits, but breeders needed to combine these qualities with adaptations to Southern conditions, including shorter summer days and more numerous plant diseases. Hartwig was adept at the work, and as his cultivars went into circulation, soybean acreage in the 12 states in his program increased sixfold between 1954 to 1974 to almost 16 million acres, one quarter of the nation’s total at the time.

While the supply of new cultivars was crucial for this growth, it was only because fundamental changes in the agricultural economy of the South had created demand. New Orleans, for instance, grabbed a big share of the growing soybean export market to Europe, which sought the crop to help raise the postwar standard of living through increased meat production. Initially, this benefitted Midwestern farmers who could ship down the Mississippi, but Southern farmers soon recognized the opportunity as well. Soy acreage in Louisiana accordingly shot up from 73,000 acres in 1954 to 1.8 million in 1974. This period also saw the rise of the “broiler belt,” ranging from Arkansas, down into the Gulf states, and up through Georgia and the Carolinas, where caged chickens bred for breast meat were fattened on soy-enriched feed. The poultry industry helped Georgia’s soy acreage increase by a factor of 31 in 20 years.

Above all, soy appealed to farmers because it was not cotton. For decades, the region had struggled with gluts of its main cash crop and consequent low prices. The government periodically attempted to limit supply through acreage allotments and marketing quotas, but with limited success. Reformers had long sought to convert the South’s cotton monoculture to mixed rotations of small grains, oats, and winter wheat, but the Southern landowners were uninterested in any system that did not provide them a robust cash flow. This is what Hartwig’s soybeans provided, enabling them to cut back cotton production. By 1960, American farmers were planting a little more than 15 million acres of cotton, down from almost 45 million acres at the crop’s peak in the 1920s.

This might provide the best clue for Hartwig’s commitment to naming cultivars after Confederate generals. (Beyond acknowledging the obvious fact that this was his practice, he never publicly discussed his reasons.) As an agricultural modernizer, he was selling Southern landowners on an entirely new, mechanized system of agriculture, of which soybeans were only one element. Confederate generals, memorialized throughout the region in monuments and the names of parks, towns, and military bases, were a readily available form of nostalgia to drape over disruptive innovation.

Key to the effectiveness of this pitch was the race of the intended audience, which remained a constant as the region shifted from sharecropping to mechanized farming. Nearly 90 percent of landowners were white, who were initially attracted to the prospect of increased earnings. With cotton, they had customarily sold the fiber while allowing their tenants to sell the cottonseed to local mills. Now they could dispense with the labor of sharecroppers and keep the profits from soybeans for themselves. As a Louisiana State University bulletin calculated in 1943, it took 184 hours of labor for each acre of cotton, compared to 10 hours for soybeans.

The tradeoff was the need to invest more heavily in equipment, such as combines, as well as fertilizers—particularly potash and phosphates—and pesticides. As Hartwig emphasized in the many articles he wrote for such venues as Soybean Digest, the large yield of beans promised by his new varieties required this kind of capital investment. At a meeting of farmers in 1975, he in fact chided them for only getting 22 bushels of beans per acre. “You ought to get 35,” he told them. At the same meeting, however, an agricultural economist reported that soybean processors had “soybean meal coming out of their ears” in a tight buyer’s market, indicating that there was no guarantee that farmers would recoup their investment.

This highly competitive environment cut both ways. As the number of farm operators decreased by more than half between 1954 and 1987, the number of farms in the South partly or fully owned by their operators rose from 71 percent to 91 percent, making the region’s agriculture in this sense more equal. But it was those best positioned to receive credit and government aid who benefitted. Such farmers were predominantly white. African Americans, poorer to begin with, suffered from discriminatory practices by both private and public lenders, notably the Farmers Home Administration, which systematically shut out Black applicants from government loans.

In 1920 there were 920,000 nonwhite farms in the South, a majority of them operated by tenants. In 1954, this had fallen to 430,000, or 26 percent of the region’s farms. By 1987, the number would drop to a mere 27,000, or 3 percent of farms in the South. This decline represented the virtual disappearance of Black sharecroppers, but also of tens of thousands of Black owner-operators unable to compete on a fair basis. Ten years later, the number was 19,000.

So as Southern agriculture became less unequal, it also became much whiter. Even at the peak of the Civil Rights Movement, Hartwig could thus avoid pushback from Black farmers over his choice of symbolism.

The influence of the Confederate cultivars waned after the 1970s, when commercial seed developers—given more patent rights to their seeds through the Plant Variety Protection Act—largely took the reins from USDA breeders like Hartwig. With a deluge of new cultivars, proper names were supplanted by alphanumerical designations like “AG2702” and “5344STS.”

In the meantime, Hartwig persisted in his enthusiasm for Confederate cultivar names, suggesting an embrace of Lost Cause mythology that went beyond strategic persuasion. He used all three of Ku Klux Klan Grand Wizard Nathan Bedford Forrest’s names on separate cultivars. “Lamar” was probably named after Charles Augustus Lafayette Lamar of Georgia, who, while not a general, was famed for being the last Confederate officer killed in the Civil War. Lamar also invested in the illegal trans-Atlantic slave trade as late as 1858. Hartwig’s last Confederate soybean was “Lyon,” released in 1993, three years before his death.

By then, he was widely honored as the “father of soybeans in the South.” An endowed chair in Soybean Agronomy at the University of Mississippi was named after him and his wife. He was awarded the USDA Superior Service Award and the USDA Distinguished Service Award.

The Confederate soybean cultivars have receded into the past, but they were part of a larger pattern of systemic racism whose legacy can be felt to this day. Facing decades of pressure, the federal government has made halting progress toward redressing the wrongs it committed to farmers of color, most recently by promising them $4 billion of debt relief in the latest COVID aid package. Critics such as Senator Lindsey Graham (R-SC) have decried this as reparations. In this context, is worth recalling Hartwig’s soybeans as one illustration of the USDA’s longstanding, built-in assumption that it served, above all, the interests of white farmers.

is assistant director of the Andrea Mitchell Center for the Study of Democracy at the University of Pennsylvania. He is author of Magic Bean: The Rise of Soy in America.