Chauvin Gets 22.5 Years for Murder of George Floyd 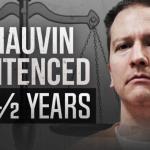 Derek Chauvin, the former Minneapolis police officer convicted in April of murdering George Floyd, an unarmed Black man, outside a convenience store in May 2020 was sentenced Friday afternoon to 22.5 years in prison.

"Justice is about more than a single sentence or a single verdict: Justice would mean George Floyd was still alive today."
—Ben Feist, ACLU of Minnesota

Hennepin County District Judge Peter Cahill, who presided over the trial, said that he was "not basing my sentence on public opinion or on any attempt to send any message" as he explained he was adding 10 years to Chauvin's sentence due to the aggravating factors of abuse of authority and "particular cruelty."

Civil rights attorney Benjamin Crump, who represents Floyd's relatives, tweeted that "this historic sentence brings the Floyd family and our nation one step closer to healing by delivering closure and accountability."

In a statement, Ben Feist, chief programs officer at the ACLU of Minnesota, said, "Today, for the first time in state history, a white officer will face prison time for murdering a Black man."

"While this may help heal our grieving community, this rare moment of consequence for killings by police does not represent justice," Feist continued. "Justice is about more than a single sentence or a single verdict: Justice would mean George Floyd was still alive today with his daughter, his girlfriend, his family, and his community."

"The systems that led to Mr. Floyd's murder by police are still intact, and police are still on track to kill 1,000 people this year," Feist added. "We must redouble our efforts to end police abuse of power, disparate treatment, and excessive force against Black and Brown communities."

Minnesota Attorney General Keith Ellison said at a press conference that "today's sentencing is not justice, but it is another moment of real accountability on the road to justice."

.#DerekChauvin is being sentenced today for murdering #GeorgeFloyd. No matter the sentence, true justice would be Mr. Floyd being alive today.

In Mr. Floyd's name, may we redouble our commitment to rethink policing and end killings by police.

On April 20, Chauvin, a 19-year Minneapolis Police Department veteran with at least 17 prior complaints against him, was found guilty on all counts—second-degree unintentional murder, third-degree murder, and second-degree manslaughter—at the end of a three-week trial.

"This is not a typical second-degree murder," asserted Assistant Minnesota Attorney General Matthew Frank, who asked for a 30-year sentence. "This is egregious."

"This is the time for the criminal justice system to say, 'we hear you', 'we recognize that this harm is real, and we know we can recognize the severity of this crime,'" Frank added.

During emotional victim impact statements, Floyd's 7-year-old daughter, Gianna Floyd, said of her father, "I miss him and I love him."

"I ask about him all the time," she said. "I want to play with him... We used to have dinner every single night before I went to bed; he used to help me brush my teeth."

Gianna Floyd, daughter of George, speaks at Derek Chauvin’s sentencing hearing, asked “if you could say anything to your daddy right now, what would it be?”

“It would be I miss you and I love him.” pic.twitter.com/Be8XWs0ySj

Terrence Floyd, George's brother, said that he wants to ask Chauvin: "Why? What were you thinking? What was going through your head when you had your knee on my brother's neck, when you knew that he posed no threat and you had him handcuffed—why did you stay there?"

"We don't want to see any more slaps on the wrist," Floyd said in advocating the maximum sentence for Chauvin. "My community and my culture have been though this. If the roles were reversed, there wouldn't be any case, we would be under the jail"

NEW: Philonise Floyd speaks to judge at Derek Chauvin sentencing: "My niece, Gianna—she needs closure. I'm asking that you please find it suitable to give Officer Chauvin the maximum sentence possible...My family and I have been given a life sentence." https://t.co/IuuRKnTv3s pic.twitter.com/TOkdMhXAcX

Philonise Floyd, another one of George's brothers, said that "my life changed forever... Every day I have begged for justice to be served."

"I haven't had a real night's sleep because of the constant nightmares, hearing my brother begging and pleading for his life... saying please officer; begging for his mom," he told the court.

"For an entire year I have had to relive George being tortured to death," Philonise Floyd said. "With a smirk on his face and children present, Chauvin had no regard for human life, George's life," Floyd said.

"I have been lifting my voice tirelessly so George's death won't be in vain," he added before calling for the maximum sentence.

Chauvin briefly addressed the court before his sentencing, expressing "condolences" to Floyd's family, but no remorse for his actions.

"There's a big difference between condolences, which doesn't take very much to offer and remorse, which does," Chuck Rosenberg says, reacting to Derek Chauvin's statement during sentencing. "He didn't express remorse." pic.twitter.com/n2xM2ooHt1

On May 25, 2020, Chauvin—who, with colleagues, responded to a call about a man allegedly spending a counterfeit $20 bill in the Cup Foods convenient store in the Powderhorn Park neighborhood—knelt on Floyd's neck for over nine minutes despite pleas that he could not breathe.

Witnesses including multiple police officers testified during the trial that Chauvin's use of force was "totally unnecessary."

Hours before his sentencing, Cahill denied a request from Eric Nelson, Chauvin's attorney, for a new trial, as well as the defense's request for a jury misconduct hearing.