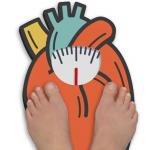 For some people, no amount of exercise and dieting keeps the kilograms off. For others, leanness comes naturally. Now, scientists might know one reason why. In one of the most comprehensive studies of the genetics of obesity to date, a research team has identified rare gene variants that protect lucky carriers from putting on weight.

The work is “a tour de force of genetics,” says Sadaf Farooqi, an obesity researcher at the University of Cambridge who was not involved with the study. Geneticists generally look for mutations that cause disease, but people can also carry subtly different versions of a gene that promote good health. Finding rare variants that offer protection against a disease is very hard because sequencing studies are usually small, Farooqi notes. Yet such variants can lead to new drug targets, she adds.

At least 2.8 million people die every year from being overweight or clinically obese. Obesity increases the risk of developing type 2 diabetes, heart disease, some cancers, and even severe COVID-19.

Diet and exercise can help people with obesity lose weight, but genetics also strongly influence whether a person develops the disease. Studies that focused on people with extreme obesity have identified common gene variants—like a “broken” copy of the MC4R gene, linked to appetite regulation—that make people more likely to be overweight. Other work has found thousands of genetic variants, each of which has a tiny impact on body weight; together, they can significantly increase the likelihood of obesity.

In the new study, researchers sequenced the genomes of more than 640,000 people from Mexico, the United States, and the United Kingdom, homing in on only the exome—the part of the genome that codes for proteins. That’s “a massive amount of work,” says Ruth Loos, a human geneticist at the University of Copenhagen not involved in the study. Just as a photo with thousands of pixels reveals tiny details of a scene, she says, the large number of study participants provided a “very high resolution to get to the rarest variants.”

Then, the researchers looked at mutations within genes that were associated with a lower or higher body mass index (BMI), the most generally accepted, if imperfect, measure of obesity. Of the 16 genes tied to BMI, five encoded cell surface proteins known as G-protein coupled receptors. Adding to the evidence they influence weight, scientists found that all five of these genes are expressed in the hypothalamus, a brain region that regulates hunger and metabolism.

Variants of one of these genes— GPR75—had the largest effect on BMI. Individuals carrying mutations that inactivated one copy of that gene weighed an average of 5.3 kilograms less and had half the odds of being obese compared with those with working versions, the researchers report today in Science.

To see how GPR75 affected weight gain, the researchers engineered mice to lack a working copy of the gene. When fed a high-fat diet, the rodents gained 44% less weight compared with control mice. The modified mice also had better control of blood sugar and were more sensitive to insulin.

Still, the GPR75 variants that inactivate the gene are rare: Only one in 3000 people seem to carry them. “It influences a very tiny group of the world,” says Giles Yeo, a geneticist at Cambridge who was not involved in the study. The fact that the lack of GPR75 has such clear, strong protective effect in the mice suggests it’s involved in metabolic pathways related to obesity, he says. “[That] tells us a lot of new biology that can influence everybody in the world.”

As such, GPR75 could be a potential drug target, the scientists say; there are two proven molecules that activate the GPR75 receptor, but drugs that switch it off could offer new medication options for patients struggling with obesity.

The work also shows that “it’s possible to generalize this approach to other traits and diseases,” such as type 2 diabetes and other metabolic disorders, says Luca Lotta, a genetic epidemiologist at Regeneron Genetics Center who led the study.

Still, for Loos, the real value of the research lies in the scale of the sequencing. “It confirms that to study complex diseases such as obesity, we need enormous sample sizes.”

As the research community and decision-makers worldwide respond to the coronavirus pandemic, Science and AAAS are working tirelessly to provide credible, evidence-based information and bring you the latest research and commentary, along with extensive news overage of the crisis. Click HERE to receive email announcements from Science. We will also send you a newsletter digest with the latest published articles.