Colbert On Trump Organization Charges Anticipation: ‘I’ve Been Hurt Too Many Times’ 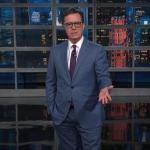 “I want to join you in that feeling, but I’ve been hurt too many times,” the Late Show host joked as his audience burst into applause. “First I fell in love with the Mueller report, then I bounced back with the first impeachment, then I gave love one more chance with the other impeachment, and I just hurt, you know?”

The 15-count indictment charged the Trump Organization and Weisselberg, who has worked for the family for over 50 years, with a scheme to defraud, grand larceny, criminal tax fraud and falsifying business records, including $1.7m in illegal payments. 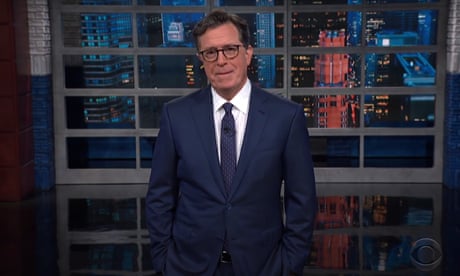 Trump also wasn’t personally charged in the filing. “Nothing sticks to this guy,” Colbert lamented. “I’d call him Teflon Don but I’m pretty sure that coating is deck sealant.”

Still, “this is a moment of reckoning”, Colbert added. “It’s like the end of the Avengers, when Tony Stark snaps his fingers and destroys Thanos’s … accountant.

“Will it work? Maybe,” he said, citing Weisselberg’s former daughter-in-law, who likened Trump and his accountant’s relationship to “Batman and Robin … They’re a team. They’re not best friends.”

“Hold on, Batman and Robin aren’t best friends?!” Colbert interjected. “How many bombshells can Americans take in one day. I don’t understand.

“We here at the Late Show will stay on this story as it continues to disappoint us,” Colbert assured. “But I do have a glimmer of hope for a sliver of consequences on the January 6 insurrection,” as Nancy Pelosi announced an investigation into the attack headed by a “select committee”, “which really sounds like the store brand”, Colbert joked. “But still good, I love ‘select committee’ lemon cookies.”

On Thursday, the House speaker named seven prominent Democrats and one Republican, the embattled congresswomen Liz Cheney, to the committee. “OK, so the committee has seven Democrats to grill the seditionists, and if that doesn’t work, they have one Cheney to shoot them in the face,” Colbert quipped.