The Ascension of Bernie Sanders 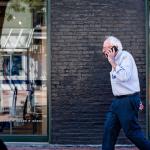 BURLINGTON, Vt. — I want to talk to Bernie about Balenciaga. And Britney. And Dua Lipa, Sha’Carri Richardson and Joe Manchin’s houseboat. And whether he prefers red or white horseradish on his gefilte fish. And the state of capitalism, and the absurd price of a Birkin bag.

We settle into a retro yellow booth at Henry’s Diner and I pull out a thick sheaf of questions. Eyeing it suspiciously, he asks with that booming Brooklyn accent, “You givin’ a speech?”

He reaches into his shirt pocket and pulls out his own piece of paper, a list of items written in his loopy scrawl. These are the only things he’s here to talk about.

At 79, Bernie Sanders is a man on a mission, laser-focused on a list that represents trillions of dollars in government spending that he deems essential. When I stray into other subjects, the senator jabs his finger at his piece of paper or waves it in my face, like Van Helsing warding off Dracula with a cross.

“Maureen, let me just tell you what we’re trying to do here,” he says. “We’re working on what I think is the most consequential piece of legislation for working families since the 1930s.”

Sanders, long a wilderness prophet in Washington, a man who wrote a memoir bragging about being an outsider, admits that it is strange to be a key member of The Establishment. As the chairman of the Senate Budget Committee, the democratic socialist is now pulling the levers in the control room.

He has changed the whole debate in the nation’s capital. He is the guy trying to yank his party back to its working-class roots and steer President Biden in a bolder, more progressive direction.

Mirabile dictu: A president and senator who are both pushing 80, men who were underestimated and dismissed for years in Democratic circles, are now teaming up to transform the country. It’s the Bernie and Joe show.

Sanders passionately believes that the only way to undo the damage done by Donald Trump and Trumpism is by showing that government can deliver, that good policy can overcome dangerous conspiracy theories and lies.

“I would have loved to run against him, to tell you the truth,” he says of Trump. “He’s a fraud and he’s a phony. That’s what he is, and he has to be exposed for that.”

Even with Trump out of office, Sanders feels we are still on the precipice. Democrats need to speak to the struggles of the white working class, he says, something that “sometimes part of the Democratic elite does not fully appreciate.” He adds: “We’ve got to take it to them. I intend, as soon as I have three minutes, to start going into Trumpworld and start talking to people.”

“It’s absolutely imperative if democracy is to survive that we do everything that we can to say, ‘Yes, we hear your pain and we are going to respond to your needs.’ That’s really what this is about. If we don’t do that, I fear very much that conspiracy theories and big lies and the drift toward authoritarianism is going to continue. You got all these folks out there who are saying, ‘Does anybody pay attention to me?’”

Sanders is a purist who doesn’t like to acknowledge how intertwined the personal and political can be. Yet he and Biden have a bond that could have a profound effect on the lives of Americans.

While the two men disagree on a lot of things, the former Senate colleagues and 2020 rivals share a mutual respect. Sanders has easy access to the White House. It is a big difference from the way he was treated in 2016 by Clinton, Inc. Not only did Hillary’s henchmen run a nasty campaign and try to rig the primaries; Hillary herself would later say about him in a 2020 documentary: “Nobody likes him. Nobody wants to work with him.”

Sanders says he gives the president a lot of credit for looking at the budget not just as numbers on a spreadsheet but as a chance to reshape the American identity.

Sanders, who has talked about spending up to $6 trillion on the reconciliation package, says he will not support a two- or three-trillion-dollar bill. “That’s much too low.”

What about grumbling coming from members of the progressive wing that they want Sanders to stay a hell-raiser, not be a bridge-builder who gives Biden and the center-left cover?

“You know politics,” he answers with a shrug. “You can’t please all of the people all of the time.” He adds that he sees this moment as a chance to “address concerns progressives have had for decades.”

Sanders was a lonely voice on democratic socialism for decades; now he has a squad to keep him company.

He lights up talking about “Alexandria, Rashida, Ilhan, Pramila, Ayanna from Massachusetts,” noting that “they really came from very much the same place that I was coming from, and they all came from different parts of the world.”

Still, Sanders is not in lock step with the most progressive members of his party on everything. He says, for example, that he prefers “fundamental reform” to defunding the police.

“A cop’s life is a difficult life,” he says, sounding like the mayor he once was. “Schedules are terrible. Salaries, in many cases, are inadequate. It’s a dangerous job. It’s a job with a lot of pressure. We need to significantly improve training for the police. In certain communities, what is going on is absolutely unacceptable. It must be changed, period. We cannot have racism in policing. If you go to Black communities or Latino communities, they want this protection.”

When I ask Sanders if he thinks A.O.C. could be president someday, out comes the list.

“You don’t want to discuss ‘Free Britney’?” I ask.

But I get him on the American sprinter Sha’Carri Richardson being suspended from the U.S. Olympics team because of marijuana use.

“I think it speaks to the problems of the so-called war on drugs,” he says. “So I have a problem with that.”

Sitting across from Sanders in this little diner in this little town, it’s wild to contemplate that the 79-year-old has become an icon of popular culture, beloved by people under 30, featured in this month’s Vanity Fair cover story as a friend of pop star Dua Lipa, and that he was an inspiration for a Balenciaga show in Paris in 2017.

He rolls his eyes at fashion. “I’m not chic,” he says. “I’m the least chic person in the world. Trust me.”

He’s also unimpressed by billionaires and their toys.

“You have the richest guys in the world who are not particularly worried about Earth anymore,” he says. “They’re off in outer space.” People are sleeping on the streets, but “Mr. Bezos is worth $200 billion and now he wants to get a spaceship. That’s very nice. That’s what this legislation is about, Maureen. I want to talk about this legislation.”

But wait, what does he think of Marjorie Taylor Greene’s lurking around A.O.C.’s office and calling her “a little communist”?

“You’re getting off the subject here,” Sanders chides, before relenting: “Look, she is the future of a segment of the Republican Party which is delusional, which tends toward violence.” He adds: “It’s not just Jan. 6. It’s taking place at state capitols. There’s people walking around with guns.”

If he were not a senator, he says, he might want to do something in media, helping journalists relate to the working class and correctly define political terms like “liberal”: “Liberals want to do nice things. And progressives understand that you have to take on powerful special interests to make it happen.”

Before the senator leaves to work the phones, he returns to his list with one last directive: “Tell people what we are trying to accomplish.”