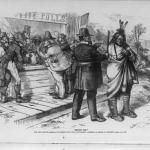 On Thursday, July 1, the Supreme Court ruled 6-3 in favor of Arizona’s voting restrictions, allowing for voter disenfranchisement within the state to take root and condoning similar restrictions to take effect in other states, like Montana. The decision will impact both the strength of the Voting Rights Act (VRA) and the ability of Native peoples living on reservations to access the vote and receive equitable representation in U.S. elections. At issue in the Brnovich v. Democratic National Committee decision are two pieces of legislation out of Arizona that affect Section 2 of the 1965 VRA. The first deals with the state’s “out-of-precinct” policy, which prohibits boards of elections from counting provisional ballots delivered to the incorrect precinct. The second applies to the collection of ballots by anyone other than a family member or caregiver of the voter.

Opponents of this method of ballot collection and delivery say that the practice poses a threat to voting security, but at time when voting rights are under attack in statehouses across the country, a SCOTUS decision in favor of unnecessary ballot “security” measures signals a threat to voter access, especially for those suffering the legacies of disenfranchisement and disinvestment, like Native and Indigenous peoples.

Ballot collection is especially vital for Native American voters living on reservations, as well as all voters in high vote-by-mail states like Arizona, New Mexico, or Montana. In these states, Native voters living on reservations rely on organizers or other representatives to collect and deliver the ballots of many individuals, often facing voting access barriers from economic impoverishment and a lack of access to transportation, among other issues.

Absentee and mail-in ballots can bypass some of those barriers, providing more people with the ability to exercise their right to vote. Viewed in this way, ballot collection is a routine part of casting a ballot. However, the SCOTUS ruling apparently views as a means of undermining the integrity of an election, despite the lack of evidence that returning ballots en masse for individuals results in voter fraud. As one Brennan Center for Justice report said, “It is more likely that an American “will be struck by lightning than that he will impersonate another voter at the polls.”

The court’s decision impacts a similar Montana law, which prevents ballot collection by paid individuals, such as a community organizer. The law is currently being challenged by Western Native Voice and Montana Native Vote, two Native-led voting rights and access organizations, on the grounds that the legislation doesn’t uphold voting security, but actually attacks the ability of those living farther from precincts to vote.

Moreover, the collection of ballots is a proven stop-gap against the limitations of state-sanctioned methods of early voting and voting access: One American Civil Liberties Union report said, “Satellite polling locations [have not] been sufficient to provide equal access to the ballots. These locations are open for only a few days within the 30-day early voting period, whereas election county offices are open for the full 30 days.”

Advocates for Native voting access aren’t surprised that less than 100 years after Native and Indigenous peoples were granted the right to vote that their access to the vote is still in question.

“Indian Country voter suppression has really taken on many forms over time,” said Shannon Holsey, the treasurer of the National Congress of American Indians and the Tribal president of the Stockbridge Munsee Band of Mohican Indians. “Voting is a fundamental right in this country and we have to be able to exercise our sacred duty because it’s something our ancestors weren’t always able to do. Voting is not a partisan issue. It’s a civic [and] human rights issue.”

The attacks on voting access and rights also comes at a time of increased voter participation by voters of color. Native, Black, Latinx, Asian, and non-white voters will soon comprise the majority of voters, with eligible white voters accounting for a shrinking portion of the electorate. Holsey draws a line from the states with Republican-dominant legislatures and the uptick in anti-voter access legislation that disproportionately harms Native voters, but she said it is significant that Native voter power is being attacked.

“Native votes really make a difference in the polls in places like Arizona and in Wisconsin,” Holsey said.

According to the National Congress of American Indians, Montana Sen. John Tester defeated his opponent in the 2018 midterm elections with less than 20,000 difference-making votes from citizens of Tribal nations. In three states—Alaska, New Mexico, and Oklahoma—Native and Indigenous peoples comprise at least 10% of the population. Despite the growing potential of Native voter influence, Holsey said that 1.2 million Native and Indigenous eligible voters are not registered, which is about 34% of Native and Indigenous adults.

By way of undermining Native voter access, the SCOTUS decision also has implications on Section 2 of the VRA, which prevents racist and discriminatory election law. As Richard L. Hasen, a professor of law and political science at the University of California, Irvine School of Law, wrote for the SCOTUS blog, the court’s undermining of Section 5 of the VRA in 2013 thrust the weight of voter protection onto Section 2. But arguments relying on Section 2 have resulted in a range of interpretations of the law itself, and both sides of the case are hoping that the court will make an example of the efficacy of the section’s “opaque” language.

Moreover, the attack on Native voting rights and the implicit, underlying questioning of Native citizenship is a part of the long legacy of settler colonialism and genocide by way of the United States federal and state governments. Holsey said the lack of media and sociocultural attention on Native voter access reflects the “invisibility of Native communities.”

“Our presence, even today in the United States, is little known by many people. They speak to us as an afterthought—as though we don’t exist,” Holsey said. “There are over 570 federally recognized tribes and many state tribes still in existence today. They’re sovereign nations [in and of] themselves. There’s dualities to Tribal nations. First and foremost, they’re Tribal citizens of their respective nations and then they’re citizens of the United States. We navigate a very complex world but we do exist, we are still here and we are still engaged.”

Ray Levy-Uyeda is a Bay Area-based freelance writer who covers justice and activism. Find them on Twitter @raylevyuyeda.

Prism is a BIPOC-led non-profit news outlet that centers the people, places, and issues currently underreported by national media. We’re committed to producing the kind of journalism that treats Black, Indigenous, and people of color, women, the LGBTQ+ community, and other invisibilized groups as the experts on our own lived experiences, our resilience, and our fights for justice.