Bernie Sanders: A Big Win for the Working Class Is Within Reach 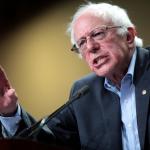 At a time when the gap between the very rich and everyone else is growing wider, when two people now own more wealth than the bottom 40% and when some of the wealthiest people and biggest businesses in the world pay nothing in federal income taxes, the billionaire class and large profitable corporations must finally start paying their fair share of taxes.

At a time when real wages for workers have not gone up in almost 50 years, when over half our people live paycheck to paycheck, when over 90 million Americans are uninsured or underinsured, when working families cannot afford childcare or higher education for their kids, when many Americans no longer believe their government represents their interests, the US Congress must finally have the courage to represent the needs of working families and not just the 1% and their lobbyists.

At a time of unprecedented heatwaves, drought, flooding, extreme weather disturbances and the acidification of the oceans, now is the time for the US government to make certain that the planet we leave our children and future generations is healthy and habitable. We must stand up to the greed of the fossil fuel industry, transform our energy system and lead the world in combating climate change.

As chairman of the US Senate budget committee I fought hard for a $6tn budget which would address these and other long-neglected needs. Not everyone in the Democratic caucus agreed with me and, after a lot of discussion and compromise within the budget committee, an agreement was reached on a smaller number. (Needless to say, no Republicans will support legislation which taxes the rich and protects working families.)

While this budget is less than I had wanted, let us be clear. This proposal, if passed, will be the most consequential piece of legislation for working people, the elderly, the children, the sick and the poor since FDR and the New Deal of the 1930s. It will also put the US in a global leadership position as we combat climate change. Further, and importantly, this legislation will create millions of good-paying jobs as we address the long-neglected needs of working families and the planet.

Why is this proposal so significant?

We will end the days of billionaires not paying a nickel in federal income taxes by making sure the wealthy and large corporations do not use their accountants and lawyers to avoid paying the massive amounts that they owe. This proposal will also raise the individual tax rate on the wealthiest Americans and the corporate tax rate for the most profitable companies in our country. Under this proposal, no family making under $400,000 a year will pay a nickel more in taxes and will, in fact, receive one of the largest tax cuts in American history.

We will aggressively reduce our childhood poverty rate by expanding the child tax credit so that families continue to receive monthly direct payments of up to $300 per child.

We will address the crisis in childcare by fighting to make sure that no working family pays more than 7% of their income on this basic need. Making childcare more accessible and affordable will also strengthen our economy by allowing millions more Americans (mostly women) to join the workforce.

We will provide universal pre-kindergarten to every three- and four-year-old.

We will end the international disgrace of the United States being the only major country on Earth not to guarantee paid family and medical leave as a right.

We will begin to address the crisis in higher education by making community colleges in America tuition-free.

We will address the disgrace of widespread homelessness in the United States and the reality that nearly 18m households are paying over 50% of their incomes for housing by an unprecedented investment in affordable housing.

We will ensure that people in an ageing society can receive the home healthcare they need and that the workers who provide that care aren’t forced to live on starvation wages.

We will save taxpayers hundreds of billions by having Medicare negotiate prescription drug prices with the pharmaceutical industry and use those savings to cover the dental care, hearing aids and eyeglasses that many seniors desperately need.

We will rebuild our crumbling roads, bridges, water systems, wastewater treatment plants, broadband and other aspects of our physical infrastructure.

We will take on the existential threat of climate change by transforming our energy systems away from fossil fuels and toward renewable energy.

This effort will include a nationwide clean energy standard that moves our transportation system, electrical generation, buildings and housing and agriculture sector toward clean energy.

In the midst of the many long-ignored crises that this legislation is attempting to address, we will not have one Republican senator voting for it

Through a Civilian Climate Corps we will give hundreds of thousands of young people good-paying jobs and educational benefits as they help us combat climate change.

We will fight to bring undocumented people out of the shadows and provide them with a pathway to citizenship, including those who courageously kept our economy running in the middle of a deadly pandemic.

In the midst of the many long-ignored crises that this legislation is attempting to address, we will not have one Republican senator voting for it. Tragically, many Republican leaders in Congress and around the country are just too busy continuing to lie about the 2020 presidential election, undermining democracy by suppressing voting rights, denying the reality of climate change and casting doubts about the efficacy of the Covid-19 vaccines.

Bernie Sanders is a US senator, and the ranking member of the Senate budget committee. He represents the state of Vermont, and is the longest-serving independent in the history of Congress

A digital subscription gives you the richest experience of Guardian journalism. It also sustains the independent reporting you love. Subscribe.