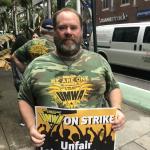 NEW YORK, N.Y.—The miners who dig black rocks from beneath the soil of Alabama returned to New York July 28 to protest outside the steel-clad offices of BlackRock Fund Advisors on East 52nd Street. The investment firm owns 13% of the Warrior Met Coal company in Brookwood, Alabama, where 1,000 miners have been on strike since April 1.

Warrior Met, formed by a group of investors to take over the Brookwood mines when the previous owner went bankrupt in 2016, demanded that the miners work up to seven days a week and take a $6-an-hour pay cut, accept reduced health insurance, and give up most of their overtime pay and paid holidays.

Hundreds of miners from throughout the Appalachian coal belt filled four police pens on both sides of the block, joined by supporters from a dozen-odd New York unions, cheering loudly when the drivers of Verizon vans, Uber taxis, and food-delivery and garbage trucks passing by honked their horns in support.

“You’re in New York City,” United Mine Workers of America President Cecil Roberts told the crowd. “When somebody comes by driving a trash truck, they’re in a union. Chances are, somebody comes along with a broom in their hand, they’re in a union. I love the labor movement in New York City. From Sweet Home Alabama to Country Roads, West Virginia, from Pennsylvania to My Old Kentucky Home, everywhere there are coal mines in this nation has showed here today.”

Warrior Met, formed by a group of investors to take over the Brookwood mines when the previous owner went bankrupt in 2016, demanded that the miners work up to seven days a week and take a $6-an-hour pay cut, accept reduced health insurance, and give up most of their overtime pay and paid holidays to help the company regain solvency.

Five years later, it’s refusing to restore those cuts. Its contract offer as of June was a $1-an-hour raise, with another 50 cents added after three years.

“We took a lot lesser contract than what we normally do to keep that company going, and now they don’t want to pay the profit back that we earned that company,” UMWA District 20 vice president Larry Spencer told the rally. “Give us a fair contract and we’ll go away. We’ll go back to work in these coal mines where we should be. We rode up here on buses to tell you your investments need to be put to use in these guys’ salaries and these guys’ benefits.”

“BlackRock, you’ve got to hear this today. These coal miners pulled Warrior Met Coal out of bankruptcy,” striker Mike Wright called through a bullhorn as the picketers circled. “We made these people all this money, and we want what we deserve.” 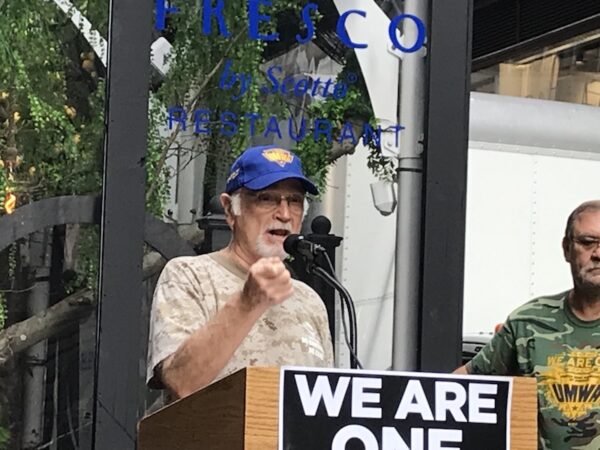 A BlackRock spokesperson declined to comment on the record. The company describes itself as an asset manager investing other people’s money, and that most of those investments are made through index funds rather than individual companies. But its 2021 report on “pursuing long-term value for our clients” says “we focus on how important sound corporate governance practices are to delivering sustainable long-term value” and that “factors such as climate change, the fair treatment of workers, and racial and gender equality” are “increasingly relevant to a company’s business operations.”

“If Warrior Met pulls it off there, they can pull it off anywhere,” said Adam Hartley, 40, a 16-year miner who came with his wife from Shadyside, Ohio, to “support my union brothers in Alabama.”

Kooper Caraway, president of the South Dakota AFL-CIO, told LaborPress he’d come to New York because “the same way greed and exploitation flow with ease across all borders, the solidarity of the working class has to do the same.”

“I’m a union person,” actress Susan Sarandon, a SAG-AFTRA member, told the crowd. “I’ll use my voice, however small it is.” Earlier in the week, Sarandon was outside Congress Member Alexandria Ocasio-Cortez’s Bronx office rallying for single-payer Medicare for All.

Having to work seven days a week was the most painful change for UMWA Local 2245 President Brian Kelly, a father of three who came with his wife, two daughters, and grandson, a four-year-old wearing a child-size UMWA T-shirt. He got Sunday off every other week.

“I’m a family man,” he says. “I never get to see them.” His younger daughter, he adds, asked him why he couldn’t coach her basketball team, as he’d done for her brother and sister.

Before Warrior Met took over, workers had two weeks’ vacation and paid days off. “Back then, we could plan to do something with the family, but with this company, forget about it,” he says. “They don’t want to give it up. They want to own us.”

Warrior Met also instituted a “three strikes” policy in which any unscheduled absence, even for a medical emergency, counts as one strike, says Amy Pilkerton, whose husband is on strike. Miners get fired after three. 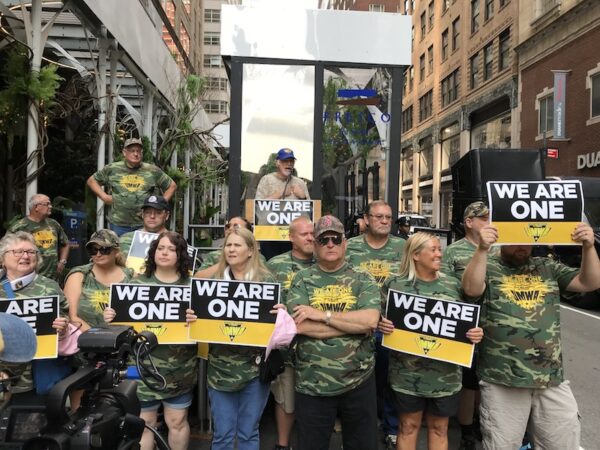 “Our healthcare is horrible,” she adds. Under Warrior Met, workers pay 20% of costs, and there’s a $750 deductible for each family member, rather than one overall figure for the whole family. The couple has four children.

The UMWA gives them $700 every two weeks in strike pay, with an extra $200 on the off weeks if enough donations come in.

On July 8, she was walking the picket line when a strikebreaker driving between picketers rammed into her right side, causing bruises. It was one of at least four times picketers have been hit by strikebreakers’ vehicles, according to the UMWA.

“All I heard was the acceleration,” she says. “Local authorities have done nothing. I have filed a warrant for that man’s arrest, and they have not picked him up, even though he goes in and out of that mine twice a day.”

Meanwhile, she says, “soon as we get back to Alabama, we’ll be back on the picket line.” The UMWA also plans to hold a rally in Brookwood Aug. 4.

“We believe in solidarity. I’ll see you next week in Alabama,” Retail, Wholesale and Department Store Union President Stuart Appelbaum told the crowd.

He told LaborPress afterwards that it would be his eighth trip to Alabama since he was vaccinated. The RWDSU tried to organize workers at an Amazon warehouse near Birmingham earlier this year, but lost the vote.