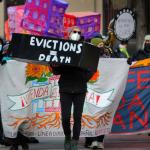 The report by Accountable.US, which calls itself a government corruption watchdog group, finds that Senators Mike Crapo (R-Idaho) and Pat Toomey (R-Pennsylvania), who both raised objections to the eviction moratorium as early as December of last year, have pocketed hundreds of thousands of dollars each from real estate groups. Crapo has taken nearly $281,000 and Toomey $183,000.

Real estate groups have filed lawsuits in courts across the country, including the Supreme Court, trying to get the eviction moratorium struck down. Meanwhile, the influential National Association of Realtors has lobbied across Washington to get the Centers for Disease Control and Prevention’s (CDC) moratorium ended.

This aggressive lobbying comes despite the fact that top corporate rental companies have reported stable or good performance in the first quarter of 2021, the report finds, with many of them reporting “solid” finances. The finding suggests that, despite the heavy lobbying, the ability to evict tenants isn’t necessary for these companies to profit.

“Even during a pandemic and severe economic downturn, the real estate industry still managed to post strong profits as families in every corner of the country battled homelessness,” said Kyle Herrig, president of Accountable.US, in a statement.

“To make matters worse, while many landlords continued to thrive, they fought tooth and nail to prematurely end the CDC’s eviction moratorium and kick millions of Americans out of their homes amid a once-in-a-lifetime pandemic,” Herrig continued, saying that it’s crucial for lawmakers to pass housing aid.

President Joe Biden had extended the eviction moratorium last month but pledged that it would be the last month that the moratorium would be in place. Advocates praised the temporary extension, but have warned that it won’t be enough to stymie an eviction wave as the country still battles the COVID pandemic.

Democrats had sent a letter to Biden asking him to extend the moratorium before the announcement, saying, “By extending the moratorium and incorporating these critical improvements to protect vulnerable renters, we can work to curtail the eviction crisis disproportionately impacting our communities of color.”

The Biden administration has estimated that the eviction moratorium has prevented 1.55 million evictions, though that figure could be higher as over 8 million people have reported falling behind on rent during the pandemic, according to the Census Bureau.

In a hearing held by the House Select Committee on the Coronavirus Crisis on landlord abuses and evictions, Jim Baker, the director of the Private Equity Stakeholder Project, pointed out that many landlords have been filing to evict their tenants despite the ban. “Since last September, some of the world’s largest asset managers that manage trillions of dollars have filed to evict residents,” Baker said.

Indeed, the eviction moratorium was put in place to shield the country as millions lost their jobs and were at threat of experiencing homelessness and becoming even more susceptible to the virus if the moratorium wasn’t in place. A recent report by Pew found that the pandemic caused twice as many renters to fall behind on rent payments than usual.

Advocates say that now is a terrible time to lift the moratorium as states are rushing to distribute millions in rental assistance that has yet to go out to renters. The pandemic is still ongoing, and many of the people most at risk of being evicted are also most susceptible to dying due to the virus.