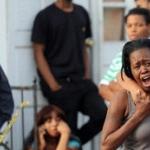 On 3 September 2005 – less than a week after Hurricane Katrina devastated the Gulf Coast – I began to understand that America cared little about what was happening in New Orleans.

I was an undergraduate at Davidson College in North Carolina at the time, worried out of my mind because my family in Mississippi was still without electricity and friends and family in New Orleans and the Mississippi Gulf Coast were still missing. The images of families stranded on rooftops were trickling in via news outlets, but it was obvious that the response from the government would be slow.

But it really hit me on 3 September. I was driving around and noticed all the American flags at half-mast. Because Supreme court chief justice William Rehnquist died.

At the time, the Gulf Coast death toll was rumored to be in the thousands with nobody knowing for sure. But flags stayed at full mast until a chief justice died. To me, this was a slap in the face to what was going on in New Orleans and a sign that the city just didn't matter to the overall fabric of the country.

Year after year, I watched the anniversary for Katrina pass while people gathered around flagpoles two weeks later to mourn the deaths from 9/11. Both were horrible tragedies, but only one seemed to say in the nation's consciousness.

Years after Katrina, I lived in Evanston, Illinois and learned about the warm weather massacres in Chicago that happen every spring break or beginning of summer where dozens of high school kids get shot within matters of hours. And how nobody seemed to care. Living in New Orleans and near Chicago has left me jaded to what America prioritizes or chooses to ignore.

So I shouldn't be surprised that the Mother's Day Parade shooting has largely been forgotten. On Sunday, shots were fired into a crowd during a parade in the New Orleans 7th ward. Police said they saw three suspects running from the scene.

This is the largest mass shooting in the United States where the shooters were still at large after the crime was committed. Think about that for a minute. From Columbine to Virginia Tech to Fort Hill to Aurora, all the shooters were either killed or apprehended on site. But the person or people responsible for shooting 19 Americans are still free.

So why am I allowed to go outside? Where's the city quarantine or FBI and Homeland Security presence for this act of "terrorism"?

Because this is an act of domestic terrorism right? Just because the alleged shooter was wearing a white tee and jeans does that suddenly make the shooting a gang-related affair? And we all know how irrelevant gang-related shootings are in America. The Mother's Day shooting is so irrelevant that politicians haven't even bothered to mention it to further their anti-gun agendas. If the shootings aren't even important enough for politicians to spin, then it's truly reached a black hole of irrelevance.

Did I mention the shooter is still on the loose? I have? Just checking. Police have released photos and video of one of the suspects, but he is still at large.

Now take a moment and imagine a Mother's Day Parade in the suburbs of Denver, a neighborhood in Edina or a plaza in Austin where bullets rain down on civilians and even hit children. I can't help but imagine the around-the-clock news coverage. And I can't help but think it's because most of America can identify with the fear of being bombarded with gunfire while just enjoying a parade in the middle of town. But America can't identify with being at a parade in the "inner city" where "gang violence" erupts. The "oh my God, that could happen to me" factor isn't present with a story about New Orleans or the Chicago southside.

But no matter where the incident occurred, the victims are still there. Victims like 10-year-old Ka'Nard Allen whose father was stabbed to death in October. Whose five-year-old cousin was shot to death at Ka'Nard's birthday party last May (Ka'Nard was also shot in the neck that day). He was also grazed with a bullet in his cheek at the Mother's Day parade. No matter what part of the country Ka'Nard is from, his story should linger in your heart.

But it hasn't because you haven't heard of him, and you've barely heard anything about what should be considered a national tragedy.

Unforunately, though, I've learned to redefine what constitutes an American tragedy. American tragedies occur where middle America frequents every day: airplanes, business offices, marathons. Where there persists a tangible fear that this could happen to any of us. And rightfully so. Deaths and mayhem anywhere are tragic. That should always be the case. The story here is where American tragedies don't occur.

American tragedies don't occur on the southside of Chicago or the New Orleans 9th Ward. They don't occur where inner city high school kids shoot into school buses or someone shoots at a 10-year old's birthday party in New Orleans. Or Gary, Indiana. Or Compton. Or Newport News. These are where the forgotten tragedies happen and the cities are left to persevere on their own.

So, once again, New Orleans will survive. And move on. Because, really, we've been here before.