The Left Gets the Last Laugh Without Cuomo, New York’s Progressives Will Be Liberated. 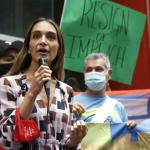 Single-payer health care and a public takeover of utility companies. Money pumped into the public-university system and public-housing stock, harvested from higher taxes on the wealthy. An end to qualified immunity for police officers. All of this is now at least possible without Andrew Cuomo around much longer to frustrate the left.

And Cuomo hated the left, swatting away two left-wing primary challengers over his time as governor. He hated the Working Families Party, the liberal third party which first flirted with not supporting him in 2014, and he hated everyone who associated with it. Cuomo tried to kneecap the WFP many times, including the creation of a sham party with a similar name (Women’s Equality Party), to deny it the ballot altogether. It never fully worked — the WFP persists to this day — but it did drive many labor unions away from the activist left. If the choice was between progressive values and Cuomo, the pragmatic unions would always go with the governor.

During his 11 years in power, he muscled unions, wealthy donors, and lawmakers to block whatever the progressive bloc in Albany tried to achieve. Cuomo was able to do so for most of that time thanks to the alliance between Republicans in the State Senate who shared power with the Independent Democratic Conference, a dissident group of conservative Democrats. This arrangement came into being because Cuomo, a master triangulator, did not want to support progressive legislation hiking the minimum wage, raising taxes, or strengthening tenant protections. As recently as 2016, otherwise left-leaning unions such as 1199 SEIU, eager to appease the powerful governor, contributed to Republicans and whipped votes against Democrats. That arrangement only ended when progressives primaried all of the IDC members in 2018, defeating six out of eight.

Since the IDC was vanquished, many young progressives have flooded the Senate, and two, Julia Salazar and Jabari Brisport, are members of the Democratic Socialists of America. The deputy leader of the Senate, Michael Gianaris, represents an overlapping district with Alexandria Ocasio-Cortez and has become a close ally of the famous representative. City progressives control a dominant bloc in the upper chamber now. They are part of the reason, ultimately, Cuomo had to resign; if the Assembly impeached him, the votes would come in, en masse, to convict and remove him from office.

The much bigger Assembly has gone left too. Older moderates are still able to tamp down the progressives and socialists to some extent — there are at least four DSA members in the chamber — but the younger lawmakers were able to force the cautious Speaker, Carl Heastie, to take impeaching Cuomo seriously.

The veteran Democrats in the State Legislature and the emboldened progressives will have far more leverage with Kathy Hochul, who will be governor for the passage of one budget before she has to seek reelection in the Democratic primary next June. She’s already been pulled left, migrating from the vanishing conservative wing of the Democratic Party — she was once fiercely opposed, like Kirsten Gillibrand, to handing out driver’s licenses to undocumented immigrants — to its conventional center. She is from the Buffalo area, far from the New York City progressive power base, geographically and politically, but Buffalo is poised to elect a socialist mayor in November. Like Chuck Schumer in Washington, she will probably be much more sensitive to the shifting ground than Cuomo ever was.

Whatever the progressives decide to prioritize next, they will act knowing one enormous impediment is gone for good. Hochul may be a counterweight, but she will not have the clout or the resentment of her former running mate. There will be no more government by vendetta. The Andrew Cuomo era has truly ended.

[Ross Barkan is the author of Demolition Night, a novel, and The Prince: Andrew Cuomo, Coronavirus, and the Fall of New York. His next novel, The Night Burns Bright, will be published in 2022. An award-winning journalist and former candidate for office, he is a columnist for the Guardian and Jacobin, as well as a contributing writer to the Nation. His journalism and essays have appeared in a wide variety of publications, including the New York Times, the Washington Post, the New Yorker, New York Magazine, the Baffler, GQ, the Village Voice, and the Columbia Journalism Review.

In both 2017 and 2019, he was the recipient of the New York Press Club’s award for distinguished newspaper commentary. He now teaches journalism at NYU and St. Joseph’s College. He also created a popular newsletter, Political Currents, on New York and national affairs. You can subscribe here.]