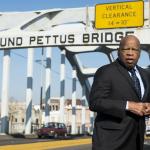 Two things are clear about House Democrats’ new plan to undo a conservative Supreme Court’s efforts to restrict the right to vote: One is that Democrats are starting to recognize the existential threat that a 6-3 conservative Court could present to American democracy. The other is that, unless a handful of key Senate Democrats stop propping up the filibuster, the Court will win this engagement.

On Tuesday, Rep. Terri Sewell (D-AL) introduced the plan, known as the “John R. Lewis Voting Rights Advancement Act of 2021,” with a strong endorsement from House leadership. The bill is expected to receive a House floor vote as soon as next week — but will likely die in the Senate, like other Democratic priorities sabotaged by a handful of Democratic senators who remain loyal to the filibuster.

Congressional Democrats have backed some version of the John Lewis Act for quite some time. Not long after Democrats regained control of the House of Representatives in 2019, they rallied behind an earlier version of the bill. That earlier version sought to restore “preclearance,” a practice from the Voting Rights Act of 1965 that required states with a history of racist election practices to submit their election rules to federal approval before those rules take effect.

The Supreme Court effectively struck down preclearance in Shelby County v. Holder (2013) — in a party-line vote with all of the Court’s Republican appointees in the majority and all of its Democrats in dissent.

The latest version of the John Lewis Act is far more ambitious than the one Democrats supported in 2019. Among other things, the new bill would undo the Supreme Court’s very recent decision in Brnovich v. Democratic National Committee (2021), which imposed new, seemingly made-up limits on the Voting Rights Act’s safeguards against racism in elections.

The new bill would also roll back the Court’s decision in Purcell v. Gonzales (2006), which drastically limits courts’ ability to protect voting rights as an election draws close. The bill creates a new process to block certain voting restrictions in all 50 states, and, it prevents the Court from changing the rules governing who may cast a ballot while an election is underway — and then retroactively disenfranchising voters who did not comply with the new rules.

The Supreme Court’s disregard for voting rights enabled a raft of legislation attacking the franchise in Republican-controlled states. Some of these bills erect hurdles between voters and the polls that might be overcome by Democratic political organizing, but others make structural changes to elections that could lock Democrats out of power. In Georgia, for example, the state Republican Party can take over local election boards that could potentially disenfranchise thousands of voters in Democratic strongholds like Atlanta.

If enacted, the new John Lewis Act would be one of the most ambitious voting rights laws ever enacted by Congress — though, again, its success depends on Senate Democrats unanimously concluding that protecting democracy is more important than preserving the filibuster. In either event, however, the bill is a giant middle finger to the Roberts Court, which has been extraordinarily hostile toward voting rights.

If nothing else, in other words, the latest version of the John Lewis Act recognizes that one of the greatest threats to American democracy is the Supreme Court of the United States — and that Congress needs to confront the Court’s recent decisions directly if it hopes to protect democracy in the United States.

The new John Lewis Act provides for preclearance on steroids

Under the original Voting Rights Act, states with a history of racist election practices had to “preclear” any new voting rules with a federal court in DC or with the US Department of Justice. The idea was to stop those laws from ever taking effect until federal officials reviewed them to ensure that they would not target minority voters.

In Shelby County, however, the Court’s Republican majority struck down preclearance. Notably, though, Shelby County did not hold that Congress could never pass new legislation imposing preclearance. Instead, Shelby County held that, if Congress wants to impose preclearance on some states but not others, it “must identify those jurisdictions to be singled out on a basis that makes sense in light of current conditions.”

The John Lewis Act seeks to meet this challenge by imposing preclearance — typically for at least 10 years — on states where “15 or more voting rights violations” occurred in the previous 25 years, or that committed 10 such violations if “at least one of which was committed by the State itself.” Local jurisdictions, such as counties or townships, can also be subjected to preclearance if they committed three or more violations during the previous 25 years.

Additionally, the latest draft of the John Lewis Act imposes preclearance on any state with only three violations, if they occur in a local jurisdiction where elections are administered by the state itself. This is likely a response to a new Georgia law, which allows the GOP-controlled State Elections Board to take over local election administration and potentially disenfranchise voters en masse.

The new version of the John Lewis Act also requires all 50 states — regardless of whether they have a racist history — to submit certain kinds of election rules to preclearance.

The list of election practices that must be submitted to federal review by all 50 states includes most laws that reduce “the proportion of the jurisdiction’s voting-age population” that belongs to a particular racial or language minority group by 3 percent or more. It includes all redistricting laws in areas with significant minority population growth. It includes certain voter ID laws, and it includes many attempts to close or reduce the hours of polling places.

Again, the mere fact that a state engages in one of these disfavored practices does not mean that the state’s new rule will be invalidated. But the election rule may not take effect until federal officials screen it to ensure that it “neither has the purpose nor will have the effect of denying or abridging the right to vote on account of race, color, or membership in a language minority group.”

The new bill would light Brnovich on fire

The Voting Rights Act prohibits states from enacting an election law that “results in a denial or abridgement of the right ... to vote on account of race or color.” Violations of this provision, which is often referred to as the “results test,” are typically enforced through litigation.

In Brnovich, however, the Supreme Court invented several new restrictions on the results test which appear nowhere in the text of the law. Among other things, Justice Samuel Alito’s majority opinion in Brnovich creates a strong presumption that voting restrictions that were commonplace in 1982 remain lawful. It fabricates a similar presumption favoring state laws purporting to fight voter fraud. And Brnovich suggests that a state law restricting one method of voting (such as, say, early voting) should be upheld if there are “other available means” to cast a ballot.

Much of the new version of the John Lewis Act appears to have been drafted by lawyers who went line by line through Alito’s opinion in Brnovich in order to cancel every new limit on voting rights made up by Alito and his colleagues.

Among other things, the bill would forbid courts from considering certain factors in Voting Rights Act cases, such as whether a particular voting restriction “has a long pedigree or was in widespread use at some earlier date,” whether the law is defended as an effort to fight “fraud,” and, in most cases, whether the state makes other methods of voting available.

Additionally, the bill contains a list of factors that courts should consider when hearing Voting Rights Act cases, including “the history of official voting-related discrimination in the State or political subdivision,” the degree to which voting is “racially polarized” in a jurisdiction (such as if white voters overwhelmingly prefer Republicans and Black voters vote overwhelmingly for Democrats), and “the extent to which minority group members bear the effects of discrimination in areas such as education, employment, and health.”

Many of these later factors are derived from the Court’s pre-Brnovich decisions.

The bill would also cut off other, more subtle tricks that the justices used to restrict voting rights

Many of the Roberts Court’s voting rights cases involve subtle procedural attacks on the right to vote — the sort of attacks that nominally leave the right in place but that prevent courts from handing down orders protecting it.

Consider, for example, Purcell. That case held that courts should be reluctant to hand down orders impacting a state’s election practices as an election draws close. “Court orders affecting elections,” the Court warned in Purcell, “can themselves result in voter confusion and consequent incentive to remain away from the polls. As an election draws closer, that risk will increase.”

There is some wisdom in Purcell’s warning that late-breaking election law decisions might create more problems than they are worth. But the Supreme Court’s more recent cases have treated Purcell less as a warning that judges should be careful when hearing voting rights cases, and more as a ban on election-related orders close to an election.

In Republican National Committee v. Democratic National Committee (2020), for example, the Supreme Court forbade lower courts from altering Wisconsin’s election practices in the midst of a pandemic, even as some localities were shutting down the overwhelming majority of their polling places because they did not have adequate poll workers to conduct a normal spring election.

The new version of the John Lewis Act provides that, except in extraordinary cases, “proximity of the action to an election shall not be a valid reason” to deny relief to a voting rights plaintiff.

Other provisions of the bill prevent appeals courts from disenfranchising voters who relied on a lower court’s order when they cast their ballot. In Andino v. Middleton, for example, a lower court suspended a South Carolina law requiring absentee voters to have another person sign their ballot as a witness. The Supreme Court eventually blocked that lower court’s decision, but not before thousands of voters had already cast a ballot.

Nevertheless, three justices would have disenfranchised any voter who did not have their ballot signed by a witness, even if those voters cast that ballot while the lower court’s order was in effect. The John Lewis Act prevents appeals courts from disenfranchising voters in this way by providing that “a reviewing court shall not order relief that has the effect of denying or abridging the right to vote of any citizen who has acted in reliance on” a lower court’s order.

It should be noted that these are only some of the provisions in House Democrats’ new, very detailed bill. The bill also includes safeguards against “retrogression,” where states enact laws that make voters of color worse off than they were before that law took effect. It imposes new disclosure requirements on states and localities. And it provides grants to smaller jurisdictions to help them comply with the new obligations imposed by this bill.

But the primary purpose of the bill appears to be rolling back the Roberts Court’s efforts to restrict voting rights. It’s a worthy effort — assuming that the Court does not invent some reason to strike down the bill.