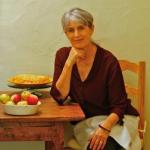 The chef, writer, and cookbook author Deborah Madison doesn’t have a personal prohibition against eating meat. She’s simply never felt the need to prepare it herself. Maybe that’s not so surprising: The author of 13 celebrated vegetarian cookbooks, including the modern classic Vegetarian Cooking for Everyone, she’s known for recipes that let vegetables take center stage. During the pandemic, though, Madison started cooking significant amounts of meat at home for the first time. It began as a way to delight her husband, a cancer survivor and long-time vegetarian whose sudden, fierce desire for animal protein came as a surprise. It ended up being something more profound—a method of coping with her recent decision to quit writing cookbooks, and a rejection of the rigid diets that she feels blunt the gustatory and cultural potency of food.

It was the summer of 2018, about 18 months before the pandemic started. In My Kitchen, a cookbook I had written, had just come out. By the time I came home from my book tour, I knew I wanted it to be the last cookbook I would ever publish.

We went out to dinner at a Japanese restaurant. I sat at the table with Patrick, my husband, and my first husband, Dan. I poured some champagne and raised my glass. I said, “It’s been a great career, and it’s over. It’s finished now. I want you to know I’m done.”

I worried I was repeating myself, I told them. It just felt like enough, somehow.

It wasn’t that I wanted to stop working completely. But I did want to retire from writing vegetarian cookbooks—I felt ready to move on from that part of my life. That “Queen of Greens” title I’ve been given is something I don’t like particularly, and have never been comfortable with. I didn’t invent vegetables or vegetable cuisine. Other people have covered that area very, very well, and I’m just one voice of many. Actually, I think the recipes in Vegetarian Cooking for Everyone are fairly conservative. They’re dishes from my generation, the foods I grew up with. I can understand how other people would want to take it further, and they do—for better or for worse.

I was sure that retiring from cookbooks was the right thing to do. But it did put me in a kind of limbo state as far as that goes, not one I’m especially happy with or proud of. So I wrote another book, a memoir called An Onion in My Pocket, after that, in part to get things off my chest. I still do love to write, and I wanted to work on something without recipes in it. It gave me a chance to do a book with more of a narrative to it, which felt much more interesting to me.

The memoir was supposed to come out in May of 2020, but then the pandemic came. My publisher pushed the book back to September, and then to November. When it did finally come out, I got to do some Zoom events, but they were hard and unsatisfying in some ways. I couldn’t really talk to people. I couldn’t look them in the eye. Nor could I be inspired, as I usually am, by going to restaurants—that feeling when you realize there’s a whole realm of food out there you’ve never tried.

It was a funny stage of my life. I wasn’t really working on anything. But I did have one thing: I take it really seriously that I cook for another person. The way Patrick and I live together is reflected in what we eat, I think. I love to cook for him, and I know he appreciates it. Through it all, it was nice to be able to do that.

We live in a very tiny community in northern New Mexico, 200 people or so. In many ways, our lives didn’t seem to change all that much, though we didn’t go to town hardly at all (By ‘town,’ I mean Santa Fe.) I just went to our local farmer’s market, and a small grocery store about 15 minutes away, and spent a lot of time gardening. I joined a CSA during the winter months, which drove me crazy—I kept thinking, ‘If I have to eat one more red daikon, I’ll scream!’

At the same time, something happened that was very different for us. My husband started to feel a desire for meat that he hadn’t had before.

Patrick was vegetarian when we met 30 years ago, and I generally do prefer plant foods. We’ve always eaten with a strong emphasis on vegetable cuisine—it’s just what we enjoy. But then he had this sudden hankering for meat, especially steak, which he had a lot of growing up. What could I do? I cooked it for him. And, you know, I found I liked it, too.

Patrick’s a cancer survivor. It was in his throat, and it was very, very hard on him. The treatments left him feeling really depleted—I think he’s still feeling the effects of it, four years later. I do wonder if that’s connected to his sudden interest in meat, after eating a certain way for much of his life.

Whatever the reason, we’ve started to alternate—meat one night, vegetarian the next. We had a lot of sausages. We ate a lot of pork, because we have a neighbor who raises pork, and he gave us roasts and things like that. I made fried chicken. And corn dogs kept coming up. I said, “I’ve never had a corn dog. What is it?” I went on YouTube and got the instructions, ground my own flour, and used Niman Ranch beef frankfurters. It was pretty good (though it looked more like a chile relleno when I was done with it, all flattened out).

I have never seen myself as a vegetarian, even though I spent most of my career writing vegetarian cookbooks. There’s a quote I love from Wendell Berry’s essay collection Another Turn of the Crank that helps explains my concern:

‘Even the most scrupulous vegetarians must use the world—that is, they must kill creatures, substitute one species for another, and eat food that otherwise would be eaten by other creatures. And so by the standard of absolute harmlessness, the two available parties are not vegetarians and meat eaters, but rather eaters and noneaters. Us eaters have got ‘em greatly outnumbered.’

I’ve kept that passage on my computer for years and years. The first time I read it, I thought—that’s how I feel. I love vegetables, but eating them is not a salve. We can’t escape from the fact of our eating; no matter what, we are killing living things so that we can live ourselves. If it’s not an animal, it’s a plant or something else. What matters more is that food tastes good and that it’s sourced responsibly.

Another reason I’m against rigid food rules is—well, people change. They just do. Their values change, or their bodies change, and it’s important to pay attention when those things happen. I see this all the time with the people I teach in my cooking classes. A woman once said, “I’ve been a vegetarian for 20 years, but lately I’m just dreaming of turkey. What should I do?” I said, “Why don’t you eat some?” She said “Oh no, I couldn’t do that. I’m a vegetarian.” To me, that’s ridiculous. What if her body was trying to tell her something? Maybe she wanted turkey because she needed some tryptophan to help her sleep or something. I don’t know—that was for her to find out.

Unless there’s a medical reason not to, I think accepting with gratitude what you’re served is really important. We might call that manners, which I don’t think people have any more in the same way that we used to. Oh, I’m vegan—therefore, I don’t want to sully my precious body, or whatever it is. Why not be more open and gracious?

In An Onion in My Pocket, I write about a memory that means a lot to me: A meal I shared with Ernie Macy, an Arizona cowboy who taught me barrel racing. He once made me a lunch with the worst kind of steak fried in salad oil, and zucchini cooked for an hour in an entire stick of margarine. It was the kind of stuff I would never eat or buy. But if I’d said “no thanks,” I never would have had the wonderful meal that he made. It was so good, and he was so happy I

appreciated it, that I still remember it literally decades later.

I think, too, of my father’s last meal—or the last time I was able to cook for him, as he was dying. He was living with his caretakers and their fifteen-year-old son in a tiny town in upstate New York. I’d just come from a talk in Iowa, and I’d brought some leftover goat cheese and leek tarts that had been served after the event. I also had some asparagus and morel mushrooms that I’d found and asparagus I’d bought from the farmer’s market. My hosts had never had goat cheese before; they asked me if the asparagus stalks were artichokes. And they cooked steak, which was practically new to me. For dessert, we all shared some M&Ms from a bowl. It was a helter-skelter kind of meal, but I loved the creativity and open-mindedness that was on display that night—and my father was delighted.

As I approach this new period in my life, I’m trying to remain open to what might come next. I do love writing—the whole process of sitting at my desk and doing it—even though I’ve come to find recipes a little limiting. I’m trying to keep my garden alive, though we’ve had a terrible drought. And I’m cooking for Patrick. The meat has been an unexpected adventure for us, and I’m glad for it. While it seems like everyone’s finally discovering the vegetable side of the plate—well, I’ve known about that forever and ever and ever. Suddenly, I’m discovering the meat side of the plate and it’s not so bad. In fact, it’s pretty darn good.

I do feel kind of adrift, sometimes. I’m not an expert anymore in anything, and that’s  disconcerting. It’s hard to get used to. I’m also older. I look at all these younger people who are busy changing the world, and having careers, and writing about this and that. Sometimes, I’m a little jealous—but at the same time, I can’t be. Because it’s life and life only. I have to come to terms with it myself.