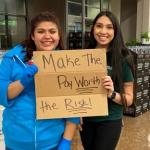 We know the U.S. labor movement is too small. Our current  union density, or membership rate, is very low, about 11% of the workforce, with only around 6% in the private sector, and it’s been falling nearly every year for decades. To put this crisis in perspective, the union membership rate hasn’t been this low in more than a century. Wages, benefits and working conditions for many workers are not improving, and in some ways have gotten worse in recent decades.

Furthermore, union membership is concentrated in too few states. Over half of the 14.3 million union members live in just seven states. And in many southern states, the union membership rate is less than 5%. That means there are too many elected officials that have no fear of voting against union and workers’ interests. Politically, we won’t accomplish many ambitious goals with such a low level of worker organization.

But unions are doing too little organizing. In the 1950s and 1960s, more than 1% of all private sector workers participated in NLRB elections every year, and in the 1970s, unions ran an average of 7,700 union elections annually. But in recent years, there have been only around 1,000 elections per year in the private sector, with less than 0.1% of all workers participating. To increase union density by just 1% per year, we would need to organize over one million workers annually. But current campaigns are organizing only tens of thousands of workers every year. Even including union organizing outside the NLRB, this number is likely not much greater. Outside of unions, there are also alternative organizations, such as worker centers, that help workers. But they’re also not organizing at a large enough scale either, although the data on that is less clear.

Why We Aren’t Organizing Enough

One silver lining is that the win rate of union NLRB elections is pretty decent, at more than two-thirds of elections in recent years. So unions know how to win organizing campaigns, but they aren’t doing enough of them. Why is that?

One reason is that organizing campaigns that are well-run and successful are currently very staff intensive and time consuming, with most campaigns having to counter outrageous union busting and multiple unfair labor practices by employers. Of course, this is because labor law isn’t good enough, and something like the PRO Act will be very helpful. But historically, we tend to get labor law reform when the labor movement is strong and disruptive enough to win it.

We also have a major structural problem. Almost all unions don’t allow any interested worker to join or get trained to organize. You have to be in a workplace that the union targets for an organizing campaign. Then you have to win your campaign, usually in an election. And then you have to bargain for a contract. Only then do you become a regular dues-paying union member. That process can take years. The average amount of time just to bargain a contract is over a year. And some workers win an election but never get a contract at all, and thus don’t become members, even after all that effort. As we see, this whole standard organizing process is slow, resource intensive, and involves too few workers.

How to Reach More Workers

Meanwhile, surveys show that nearly 50% of non-union workers would vote to join a union. Considering just the private sector, there are about 100 million non-union workers, so let’s assume that roughly 50 million workers want a union. How do we reach more of these workers when current union efforts only organize a very small fraction?

One way to reach more workers is for unions to be much more open about providing organizing training and assistance to workers who want it. The Industrial Workers of the World (IWW) is the only union I’m aware of that allows any worker to join and get training and organizing assistance. That’s a great example other unions should follow. Mainstream unions don’t do this because, with few exceptions, they are committed to the idea of a membership based only in workplaces with exclusive representation and a union contract. Any worker who wants to learn to organize and get some help fighting for improvements on the job is out of luck if they can’t convince a union to prioritize their workplace.

The traditional union framework is simpler, provides a lot of organizational stability, and is easier to staff, but it leaves out too many workers who want a union. So we need to find another way to get organizing assistance to the millions of workers who want it.

Organizing Training Projects Are an Answer

An important concept for us to remember is that any group of workers organizing together to improve working conditions is acting like a union. They may not have official recognition and a contract, but they are a union nonetheless, and they can organize to win things. Many workers don’t realize this. But they usually need some help to start organizing, since this is a challenging and risky endeavor with many ways to fail.

That leads us to what I’ll call Organizing Training Projects, which are programs available for workers to learn about union organizing. A long-running example is Labor Notes, which has organizing training schools and materials like Secrets of a Successful Organizer. There’s also Jane McAlevey’s Strike School, which is based on the organizing philosophy found in her book No Shortcuts.

And there is also the Emergency Workplace Organizing Committee (EWOC), a joint project of the Democratic Socialists of America (DSA) and the United Electrical, Radio and Machine Workers of America (UE). EWOC was started in 2020 to help workers organize during the pandemic. I’ve been involved in EWOC over the past year, and in part two of this series, I’ll describe how EWOC provides organizing training and campaign assistance to more workers who want and need help. It’s worth discussing how EWOC functions in some detail, because it provides a model for how we can overcome the organizing problem confronting unions today.