We Demand Bold Action for All Working People 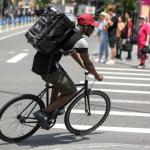 This Labor Day, debates about working conditions, wages, and who deserves what in the United States are everywhere.

Although many people lost their jobs, wages, and suffered immensely during the pandemic, for some it provided an opening to experience what having enough money and time feels like. It also laid bare what low-wage, underemployed, and jobless people have been shouting for decades: The capitalist system doesn’t just drive wealth inequality—it is designed to exploit and undermine the working class and to protect the power and economic interests of the wealthy.

This Labor Day, we demand the White House take bold action for all workers now. We need Congress and the Biden Administration to protect the critical investments in the human infrastructure bill from any attempts to separate it from the push for general infrastructure spending.

Among other things, Labor Day observes the fight for dignified employment, safe working conditions, and a fair wage. Black workers have been at the vanguard of protecting living and working conditions for Black communities in the U.S. In 1866, a group of newly emancipated Black women working as laundresses in Jackson, Mississippi, formed the state’s first labor union, the Washerwomen of Jackson. Excluded from white trade unions, free Blacks organized the Colored National Labor Union in 1869 to improve conditions for Black ship caulkers. Then, in the early 20th century, Lucy Parsons, a Black anarchist, co-founded three influential radical unions in Chicago.

Even when labor laws such as the Fair Labor Standards Act of 1938 were implemented, Black workers—especially domestic and agricultural workers—were excluded from protection. Today, the erosion of unions means workers have less power to bargain for their conditions, pensions have become rare, and wages are stagnant.

One group—Black home-care workers—are the backbone of our economy and make all other work possible, yet they have been among the first to lose income and the last to receive relief during the COVID pandemic. The country now faces record job losses; women, and disproportionately women of color and immigrants, are feeling the deepest impact.

Right now, millions of working people are leaving jobs with hazardous conditions and insufficient wages and benefits, in search of more fulfilling and dignified work. This mass exodus is made possible by everyday people who imagine a life beyond work—with their loved ones, experiencing joy and rest.

We need more access to job training and placement for Black workers and other groups who have historically faced the highest rates of chronic unemployment and underemployment due to racism and discrimination. We also need to create an affirmative process to remove the threat of deportation and grant work authorization to workers who have denounced workplace abuses.

For a comprehensive framework for a society that values Black lives, repairs past harms, and invests in Black communities, check out the Movement for Black Lives' Vision for Black Lives policy platform.

In Black love,
The Movement for Black Lives