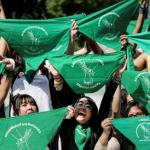 Mexico's supreme court has struck down a state abortion law, ruling that criminal penalties for terminating pregnancies are unconstitutional, in a decision which advocates say provides a path to decriminalisation across the country.

In a unanimous 10-0 ruling, the top court ordered the northern state of Coahuila to remove sanctions for abortion from its criminal code – with several justices arguing the prohibitions on voluntarily interrupting a pregnancy violated women’s rights to control their own bodies.

“It is not about the right to abortion,” said justice Luis María Aguilar, who wrote the court’s opinion for overturning the Coahuila law. “It’s rather the right to decide of women and persons able to gestate to make decisions.”

The ruling contrasts sharply with recent actions in the United States to restrict abortion access – most notably across the border from Coahuila in Texas, where legislation – upheld by the US supreme court – bans abortion after about six weeks of pregnancy and allows citizens to pursue legal actions against women seeking a termination.

But the decision continues a trend in Latin America towards decriminalization as women waving green handkerchiefs have thronged the streets across the continent to demand action on abortion access and gender violence.

Mexico follows Argentina, where lawmakers voted in December to decriminalise abortion during the first 14 weeks of pregnancy.

Tuesday’s ruling continues a trend from Mexico’s supreme court to rule in favour of petitions brought by women seeking abortions for health reasons or due to sexual assault.

It also turns back a spate of state-level attempts over the past dozen years to restrict abortion through constitutional amendments.

“This is the first time the court is getting to the heart of the matter” on abortion restrictions, said Rebeca Ramos, director of GIRE, a reproductive rights organisation.

“In this specific case, it’s whether criminalisation, considering elective abortion at the early stages of pregnancy to be a crime, is constitutional,” she added. “What’s being resolved is that it’s not constitutional because it affects a series of human rights.”

So far, only four Mexican states have decriminalised abortion during the first 12 weeks of pregnancy – with three state removing restrictions over the past two years.

Mexico City decriminalised abortion in 2007 and the supreme court upheld that law as constitutional.

But Ramos said the court did so on the grounds that states were allowed to set their own health policies. More than half of Mexico’s 32 states subsequently approved constitutional amendments declaring life to begin at conception.

Those amendments have not stopped the supreme court from ruling in favour of increased access to abortion, however, and the court is expected to rule later this week on the constitutionality of an amendment approved in the state of Sinaloa.

“According to a secular state, the defence and autonomy of privacy of women must be unconditional, according to her life plan, and presume that her decision is rational, deliberate and autonomous,” justice Norma Piña Hernández said in her arguments.

In his argument, Arturo Zaldívar, president of the court, wrote: “The criminalisation of abortion punishes the poorest women, the most marginalised, the forgotten and most discriminated against, in the country. It’s a crime that in its nature punishes poverty.”

President Andrés Manuel López Obrador declined comment when asked at his Tuesday press conference on the pending court decision. The president has showed little interest in the abortion issue, even though his ruling Morena party identifies as left-leaning.

“It’s not a secret that [López Obrador] personally opposes the rights of women to decide and that he sees the feminist movement with suspicion,” said Barbara González, a political analyst in Monterrey.

But with the decision, González said, the court would be able to “show independence” in the face of accusations it was being unduly pressured by López Obrador on other matters.

Mexico’s Catholic church voiced dismay with the ruling, while others expressed anger over the justices’ decision to refer to “persons able to gestate” in their arguments.

Bishops have previously lobbied state governors to approve prohibitions on abortion, said Rodolfo Soriano-Núñez, a sociologist who studies the Mexican Catholic church, “and in exchange they stayed silent on issues such as corruption and violence”.