Writer Maggie Nelson Asks What It Means To Feel Free 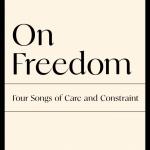 "Can you think of a more depleted, imprecise, or weaponized word?" asks the writer Maggie Nelson at the beginning of her elastic, imaginative study of the idea of freedom.

It's a word that lends itself to any agenda, any wish, any fear. In the past few months, vaccines have demonstrated this with special clarity, in their double guise as tickets to liberation and tools of authoritarianism, depending very much on who you ask.

At the beginning of On Freedom: Four Songs of Care and Constraint, Nelson describes walking across the campus where she works as a professor and seeing a young man with a sign that said, "Stop Here if You Want To Talk about Freedom."

"Boy do I," Nelson thought. She asked the young man what kind of freedom he wanted to talk about. "He looked me up and down, then said slowly, with a hint of menace, a hint of insecurity, 'You know, regular old freedom,'" she writes. "I noticed then that he was selling buttons divided into three categories: saving the unborn, owning the libs, and gun rights."

But if that kind of freedom — predicated on limiting other people's freedoms — is antithetical to Nelson, she also does not subscribe to the "rote, unventilated" sense of freedom as it's often used on the left: the idea that people are working progressively towards some joyous, emancipatory point in time when liberation will have been finally achieved. This language, though inspiring, can "condition us into thinking of freedom as a future achievement rather than as an unending present practice, something already going on," Nelson writes.

So what does freedom look like as a practice, not in the future but now, in our imperfect and unequal world? In four allusive, blunt, funny essays, she tries to imagine freedom as it exists in the contemporary contexts of art, sex, drugs, and climate.

One of the threads running through these essays is the importance of acting, or believing, as if you have power, even in the face of evidence to the contrary. "No doubt there is much to feel powerless about these days, and no doubt certain bodies bear the brunt of this fact to a much greater extent than others," she writes. But a "deepening conviction of our powerlessness can at times make us insensitive to the power we do have..."

This argument is perhaps most fully explored in the realm of sex. Nelson asks: What kinds of attitudes and actions can we take in the face of violent, enveloping misogyny that don't understate the scale of the problem but still allow us to live our lives? How do we keep the worst handful of people we've ever encountered from shaping our happiness and freedom more than they need to?

Nelson is clearly aware of the pitfalls of this approach, and the danger of deemphasizing the violent misogyny that saturates our culture. But for Nelson, talking about trauma and fear without also talking about pleasure and choice impoverishes women's sexual lives. She recalls a job running consent workshops for college kids. She quit, eventually, in part because "I felt the program did not leave enough space to discuss the ravenous, turbulent fact of female desire, which I had experienced as the most powerful force ripping through my life, but literally had no place in the program's script, which mostly focused on role-plays about how to eject a guy from your dorm room if a massage turned sexual," she writes. Or, as Nelson puts it elsewhere, saying no is hard, "but so is saying yes, especially if it involves something more or different than acquiescence."

On Freedom is by turns taut and discursive, precise and atmospheric, combining fierce intellectual kick with an openness to nuance. Nelson has a perpetual orientation towards not either/or but both/and. I am sure this book will offend some readers — looking at the critical response, it already has. Two recent negative reviews have homed in on one brief section, part of which is an endnote, in which she criticizes the gleeful response to a video of neo-Nazi Richard Spencer being punched in the face. To me, the question of whether this makes Nelson secretly ideologically compromised (no) seems far less interesting than the questions Nelson herself is asking about how to live in a world with crushing oppression, alongside people with cruel and violent beliefs, without giving into despair or violence yourself.

There is a lot of vulnerability in Nelson's writing, and I don't mean in the way she shares intimate and painful details of her life, though that is there as well. After nearly every point, she will complicate it — probe its weak spots and limits, ask what she's not seeing, contradict herself. While she is sharp, she is rarely certain. She doesn't write, as so many people on the internet are conditioned to do, from a position of defensiveness, an assumption of bad faith readings, a desire to make her words sleek and unassailable. The result is not fuzziness but precision, a hyper-awareness of moral shading. In On Freedom, Nelson is doing what feels like intellectual echolocation: putting out calls and seeing what answers.

Annalisa Quinn is a contributing writer, reporter, and literary critic for NPR. She created NPR's Book News column and covers literature and culture for NPR.

Quinn studied English and Classics at Georgetown University and holds an M.Phil in Classical Greek from the University of Cambridge, where she was a Cambridge Trust scholar.