Mikis Theodorakis: A Life of Music and Resistance 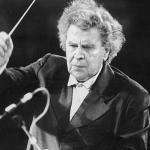 “Now at the end of my life, at the time of reckoning, the details fade from my mind and remain the big picture. So I see that my most critical, strong and mature years were spent under the banner of the KKE. That is why I want to leave this world as a communist”.

— From the personal letter by Mikis Theodorakis sent to Dimitris Koutsoumbas, General Secretary of the Communist Party of Greece (KKE), dated October 5, 2020.

On Thursday, September 2, renowned Greek composer and political activist Michail “Mikis” Theodorakis died in Athens at 96 of cardiopulmonary arrest. Mikis was a legendary composer and was active in the Greek resistance (1941–1944) during World War II and the resistance against the Greek military junta (1967-74).

Theodorakis’ works were censored for his political views and activities. He was jailed, tortured, and forced into exile. He was associated with the Greek left for most of his life and was elected to the Greek parliament several times, twice from the leftist/communist platforms. Throughout his life, he opposed imperialism, fought for peace and the cause of the working class. He has also received many international honors, including the Lenin peace prize.

Greece will mark three days of mourning to honor the life and career of Mikis Theodorakis. Progressive sections in Greece and abroad, including the Communist Party of Greece (KKE) and the Progressive Party of Working People (AKEL), condoled his death.

Music in the key of struggle

Born in Chios, Theodorakis was interested in music from an early age and took his first lessons in Patras and Pyrgos. In the 1940s, he studied at the Athens Conservatoire. He conducted his first concert at the age of seventeen. He founded his first orchestra while in Crete and became the head of the Chania Music School. Theodorakis and his wife  Myrto Altinoglou moved to Paris in the 50s, studying and working more on music.

Mikis Theodorakis’ association with politics started in Athens in 1943 and was closely intertwined with his musical work. He became a member of the Greek People’s Liberation Army (ELAS), the military wing of the left-wing National Liberation Front (EAM), which resisted the axis forces in Greece during World War II. During the Greek Civil War, he was arrested, exiled to Icaria and Makronisos, and was brutally tortured. Following his return from Paris, outraged by the killing of leftist MP Grigoris Lambrakis by far-right extremists in 1963, Theodorakis formed Lambrakis Democratic Youth and was elected to Greek Parliament in 1964 from the United Democratic Left panel.

At this moment, his compositions based on poems brought about a cultural revolution in the country. He developed his “metasymphonic music” by mixing the symphonic elements with popular songs, western symphonic orchestra, and popular Greek instruments. He founded the Little Orchestra of Athens and the Musical Society of Piraeus and organized many concerts in Greece.

He gave the score for the film Zorba the Greek in 1964. Around the time, Mikis also composed the renowned “Mauthausen Trilogy,” also known as “The Ballad of Mauthausen,” based on poems on the holocaust written by Greek poet Iakovos Kambanellis. Critics call it Theodorakis’ best work ever. 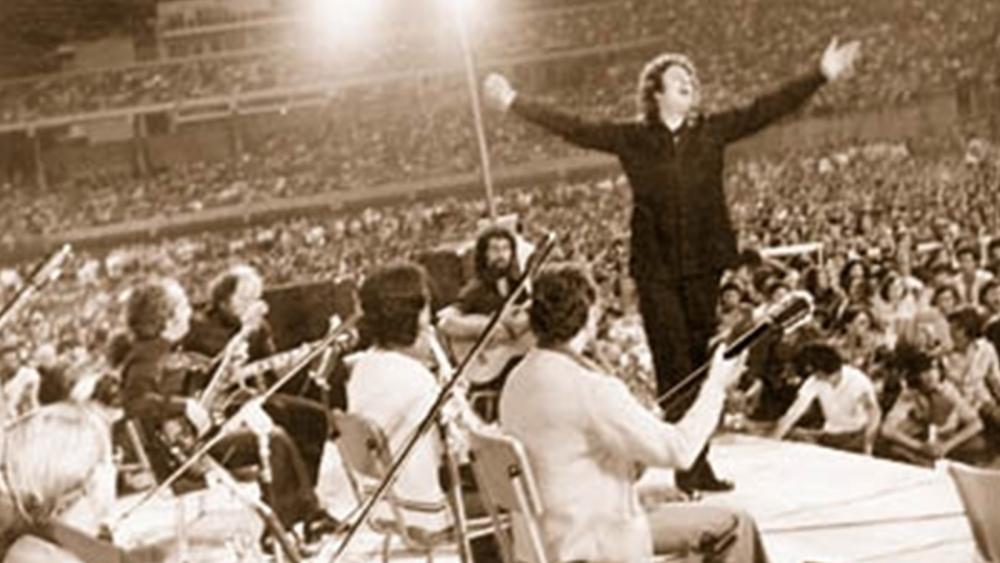 Mikis Theodorakis during a concert at the Panionios Stadium in 1975. Photo: 902.gr

When the military junta came to power in 1967, Theodorakis went underground and organized the Patriotic Front. In response, the Greek military junta banned his works and proceeded to arrest Theodorakis and imprisoned him. In 1968, Mikis and his family were brought to Zatouna, and the junta interned him at the Oropos concentration camp. However, international pressure by famous artists and politicians mounted, and forced the Greek authorities to allow them to leave the country in 1970.

While in exile (1970-74), Mikis traveled extensively to campaign against the Greek military junta. He met many leaders from the developing world during this period, including Salvador Allende, Gamal Abdul Nasser, Tito, Olof Palme, and Yasser Arafat.

He composed political songs and performed worldwide to raise international public opinion against the Greek military junta. During this period, he also gave music to Pablo Neruda’s Canto General and Yiannis Ritsos’s Eighteen Short Songs of the Bitter Motherland. In 1974, he returned to Greece and focused on more symphonic compositions and operas during the 80s and 90s. He also served as the General Musical Director of the Choir and the two Orchestras of the Hellenic State Radio (ERT).

Upon his return to Greece in 1974, Mikis became active again in Greek politics in close association with the Communist Party of Greece (KKE). He was elected again to the Greek parliament in 1981 and 1989 (with the backing of New Democracy (ND). He also served as a Minister (1990-1992) in the cabinet of Konstantinos Mitsotakis. 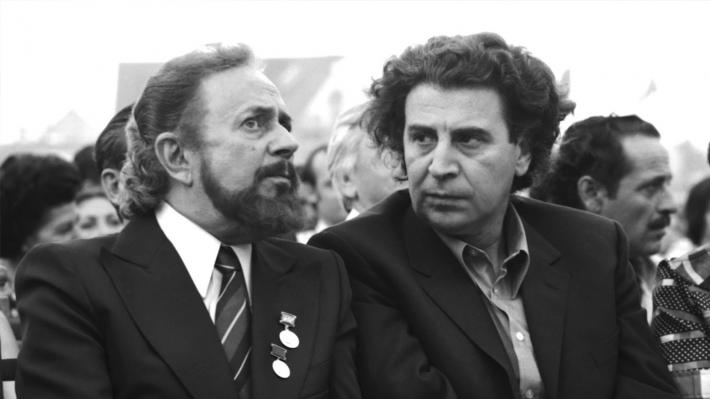 Throughout his life, Mikis remained a staunch opponent of Israel’s occupation of Palestine and helped compose the Palestinian national anthem. He vociferously criticized the NATO-led bombing of Yugoslavia in 1999 and the US aggression on Iraq. Mikis extensively campaigned for Greece-Turkey friendship, peace and unity in the ethnically divided island of Cyprus. He criticized the Greek government for the loan debt accrued from the International Monetary Fund (IMF).

On September 2, the central committee of the Communist Party of Greece (KKE) said that “impulsive, inspired and ignited by the passion of offering to the people, Theodorakis managed to fit in his majestic work the whole epic of the popular struggle of the 20th century in our country. After all, he was part of this epic.”

“His music broke the borders of the country, as its language has the universality of the common sufferings, the hopes, the visions that are shared by all the peoples, all the humble ones of the earth,” added the KKE.

The Progressive Party of Working People (AKEL) of Cyprus bid farewell to Mikis, saying that “Mikis Theodorakis’s relationship with Cyprus was special and in every test of the Cypriot people he gave us a thunderous presence, supporting our struggle in every way he could.”