German Elections: Who With Whom Elections 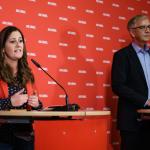 In German elections—like the coming ones, as always on a Sunday—all you have to do is present the registration paper mailed to every citizen, then make crosses on a paper  ballot. No trouble with the boss, no missing work, long lines or quarrels about fraud or discrimination.  It sounds easy.

But those ballots can be very, very long—and making  the right choice for your crosses could raise problems. 47 parties are in the running for seats in the Bundestag; it might be wise to brush up on arithmetic, maybe even calculus. This year Berlin has its own state election as well, with 34 parties competing for its House of Representatives and for all sixteen borough councils too. A good pencil-sharpener might be useful (or a ball-point). Mostly they are small, even tiny, like the Animal Rights Party, the Liberal-Konservativ Reformer, or a party run by the German widow of Lyndon LaRouche, an American provocateur of past years. Or the little German Communist Party. Few reach 1%.

Just six have been major rivals in recent years, three of them on the right. The Christian “Union” (CDU-CSU), a double party with its special Bavarian twin sister, now lacks the motherly attraction of Angela Merkel. Its main candidate, conservative Armin Laschet, wants in general to “follow the same course,” but has close to zero charisma. Until recently it was in the lead but then, partly due to CDU confusion in the Corona crisis and the flood catastrophe, it drooped to a sickly 20%. Laschet being caught on TV with a private laugh while the president condoned with flood victims didn’t help him. His frantic efforts to reverse the trend consist mainly of red-baiting about “dangers from The Left”.

The Union’s junior ally, the Free Democratic Party (FDP), is almost explicitly pro-business: “Don’t tax the rich!” But its one-man leader, glib as ever, has managed to move it up the polling scale to 11%.

Then there is the neo-fascist Alternative for Germany (AfD). One of its two faces seeks respectability, is somewhat mindful of its tongue and tries to get the others, at least for the time being, to keep their Hitler-happier hands in their pockets and hold off with verbal (or real) stiff-arm salutes.  Coalitions with the AfD are still taboo for all other parties, though some rightists in the CDU-CSU flirt constantly with the idea.

But while the AfD has stagnated at 10-11%, a new party called The Basis (i.e. “grass roots”) has been created. Its only program seems to be rejecting face masks and social distancing—and cops who try to enforce them. It attracts people both from the left and the far right, some nutty anti-vaxxers but mostly people just sick of virus restrictions and government bumbling, roughnecking and profiteering from the pandemic, with money and censorship. Will it fade away (maybe with Corona) or become a menace, whose financial supporters and backers remain opaque and mysterious. We shall see.

What about the three “left of center parties”? The Social Democrats (SPD) seemed doomed to total downfall; in June they were crawling along at 14%, incredibly low for Germany’s second party. But suddenly they soared skyward; now at 25% in the polls, with only a few days left to go, it seems very possible that they will come out strongest. Their main candidate, Olaf Scholz, now Vice-Chancellor and Finance Minister, has a self-confident, nonchalant but forthright manner which has somehow won many voters, despite one scandal after another, like secretly advising a Hamburg bank in a giant tax rip-off while mayor of that city, or “overlooking” a phony finance company’s scam, bilking billions, which his department was supposed to be monitoring. But then, the hands of many “Christian” politicians are by no means cleaner. Somehow the SPD has honed to a fine art ways to promise working people fine improvements—before elections—but then, if it wins, watering them down, forgetting or even wrecking them, yet somehow regaining trust in time for the next elections.

The party of the Greens also took a ride on the polling roller coaster, swooping up into an unprecedented first place last April (at 28%). For two months it seemed its energetic young leader, Annalena Baerbock, might even become Chancellor. But, alas, in June it fell back into second or third place; public support for her cheery enthusiasm waned as quickly as it had waxed, while her party faces the difficulty of doing the splits; maintaining its long reputation as a leftish party so as to hold younger environmentalists but not losing its older, once leftist, now mostly well-placed old guard.

And then there is Die Linke, The Left, with remnants of the Socialist Unity Party which governed East Germany’s GDR for forty years and then, reduced, reformed, rejuvenated, joined with militant West Germans leftists in a joint endeavor to move the political scenery.  Despite countless handicaps (like the mass media) it had some real successes. And a host of inner-party differences.

One success was in the state of Thuringia, where it (the party’s right-wing) holds the top spot, well ahead of the SPD and Greens, with whom it shares the government. An SPD-led “left-of-center” trio has also ruled Berlin for the past four years; if we can trust the polls it will continue for four more.

But while they share the rule in Germany’s capital and biggest metropolis, they do not always share programs. This is clearest in the housing debate, in a city where most people live in rented apartments. They agreed on a law capping rent levels and barring increases, but Germany’s Supreme Court ruled that such decisions could not be made except on a national level. Then a militant non-party group launched a new referendum campaign; to compel all real estate firms owning more than 3000 apartments to turn them over to public ownership, which would mean “confiscating” 240,000 apartments for a price which the city would regain with people’s regular rent payments, but with none of the constant increases in the real estate moguls’ gentrification programs. A quarter of a million Berliners signed petitions,  far more than required, thus bringing the plan to a vote in Berlin next Sunday—one more ballot! If approved, this confiscation must be debated by the newly-elected city delegates. The Left, despite its “moderate” leanings in Berlin, is in full support. The Greens? Only half-heartedly, and unlike The Left they collected few signatures. As for the SPD, including its main candidate, who may become Berlin’s first female mayor, it is adamantly opposed. Its ties to big real estate seem stronger than any principles. So hot times in Berlin may not be just climatic in nature!

Debate on the national scene revolves around one key question; who with whom? If the SPD with Olaf Scholz wins first place, it will still need partners to form a government. One will certainly be its closest neighbor, the Greens. But those two will hardly reach the needed half of the seats and votes. Who will provide the third leg of a very wobbly stool? Big-biz FDP, which dislikes both of them? Or The Left? The SPD and the Greens also have wings; their right wings insist, “Not ever with those GDR-infected Reds!” Their left wings quietly disagree: “Maybe with The Left after all, but only if it ends its opposition to sending German soldiers abroad on NATO or other missions.”

Wings of The Left can also flap in opposite directions. Some say: “We must be willing to make compromises. Just think of what it would mean to have ministers in the federal government”!

Others contradict: “It would mean giving up our opposition to German expansionism and to military build-up, the heart of our party’s raison d’étre! Regardless of any attempts by us, the smallest and weakest in the trio, to win improvements for working people, the elderly or children, we would then no longer be anti-imperialist but rather supportive of an establishment which genuine leftists have opposed ever since WW One! We would no longer be the only “Party of Peace”—and therefore superfluous!”

But The Left faces a far greater menace; its figures in the polls, after slipping from a one-time high of 11%, settled down at 7, even 6 %—perilously close to 5%. If the party fails to reach that magic dividing line it would lose it status as a fraction, nearly all delegates, its rights in the media, official financial support—and come close to losing much effectivity and any audible voice for progressives! It has somehow been unable to convince few more than its dwindling “old faithful” that it has any real chance to improve their lives. In East Germany it is too often viewed as part of “the Establishment”; in West Germany it is still burdened with anti-Communist, anti-GDR prejudices. Except in the rent question, it has not won a reputation as a forceful, defiant fighter. Despite many brave efforts, it is in great danger.

If it meets this challenge the question of joining a government coalition remains—if invited. Of the two main Left candidates on Sunday, Dietmar Bartsch, an East German, leans toward a “Red-Green-Red” coalition (SPD and The Left both claim red as party color). The other main candidate, Janine Wissler from West German Hesse, seems unhappy at the idea of such a compromise, even though it could get her a seat in the federal cabinet. In TV debates Janine has been a tough fighter, hard, clear, always (or almost always) with a friendly smile while hitting out at the limited programs of the other parties and their often alarming belligerency toward Russia and China. She notes the uncertainty of the SPD and Greens, who might want the Left to reach a majority—if it is tame enough—and if it gets more than 5%!

These months of the virus are complicated times. On the good side, some working people are resisting. Locomotive engineers just won a fight after three train shutdowns, the personnel of Berlin’s hospitals are striking just as militantly for better conditions. The  Corona situation or its aftermath can bring many conflicts. A growing fight-back, with The LEFT in the lead, may be more necessary than ever! For Sunday’s crucial vote we may indeed need calculus—or a crystal ball!

[Victor Grossman, born in NYC, fled McCarthy-era menaces as a young draftee, landed in East Germany where he observed the rise and fall of its German Democratic Republic (GDR). He has described his own life in his autobiography Crossing the River: A Memoir of the American Left, the Cold War, and Life in East Germany http://www.amazon.com/Crossing-River-Memoir-American-Germany/dp/1558493… (University of Massachusetts Press, 2003), and analyzed the GDR and questions of capitalism and socialism in Germany and the USA, with his provocative conclusions along with humor, irony and occasional sarcasm in all directions, in A Socialist Defector: From Harvard to Karl-Marx-Allee  https://monthlyreview.org/product/a-socialist-defector/(New York: Monthly Review Press).[