Invest In the Public Now 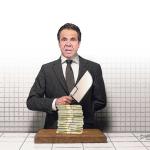 Let’s be real: Andrew Cuomo was terrible at economic development.

Under Cuomo, New York’s economic development policy was all about developing the pocketbooks of campaign donors and leaving working class and poor New Yorkers behind, cutting out small businesses while favoring cronies, and leaving communities across the state struggling for resources.

The poster child of Cuomo’s tenure is the Buffalo Billion, a gross transfer of money from taxpayers to Cuomo donors, with very little to show for it except corruption convictions, like that of Cuomo’s friend SUNY Polytechnic President Alain Kaloyeros, who sent nearly a billion dollars in public money to developers who were Cuomo donors. Cuomo’s “brother” Joe Percocco is also in prison for bribery in connection with economic development. But it’s not just the ones’ who broke the law. The entire model was broken.

Remember Start-Up New York, tax free zones that seemed to keep benefitting Cuomo, but not do much for development? In 2015 Start-Up NY spent $700K for every job the program created.

Remember the $2 billion that Cuomo wanted to give Amazon to come to New York — and how Amazon came anyway?

Real economic development is more urgent than ever, as communities have been ravaged by COVID-19. Our current economy is unequal and unfair, and that’s a result of policy choices, not some natural state of affairs.

But the good news is we’ve got a real chance to turn the page not just on Cuomo, but an upside-down model of economic development, and make New York what it can and should be: a thriving economy in every corner of the state.

There are some big changes on the horizon. In the state Senate, James Skoufis, D-Woodbury, has been leading on reforms to the “Industrial Development Agencies,” a system Skoufis has rightly skewered as being beset by a “culture of kickbacks,” that get in the way of meaningful economic growth. The package of reforms includes bans on conflicts of interest, strengthening oversight and radically improving transparency about how public money gets spent.

Last week in Ulster County, County Executive Pat Ryan took a clear stand against the waste of the Ulster County IDA, when he flatly refused the nearly $2 million tax break for a Kia car dealership they were promoting. The deal just didn’t make any sense — like a lot that has happened in New York in the last decades. We need more leadership like Ryan’s, instead of quiet back-scratching or turning the other way because it causes problems to publicly oppose a handout.

We have two big changes to make: first, to switch from a vision of giving money to private few to making public investments — with an emphasis on the public. Public banks, public schools and public broadband. Second, we’ve got to stop seeing big, already powerful businesses as the drivers of growth.

On the latter, we’ve already seen a change with state Attorney General Letitia James, who has prioritized antitrust and has been leading nationally on taking on Amazon, Facebook, and other corporate monopolies. But taking on corporate bullies is not just for the attorney general — it is an ethos that should be at the heart of economic development. Instead of billions for billionaires who can then use subsidies to crush competitors, economic development should bring an antitrust ethos to everything it does.

It’s going to take an attitude of investment, instead of trying to buy economic development on the cheap; it is worth refurbishing our buildings, spending on green energy, spending on broadband, fixing our sewers, providing access to credit, spending on arts and sports in schools, going big not like Buffalo Billion big donor big, but big in a trusting vision that meaningful long-term investment pays off.

Cuomo tried to convince us that he was the king of economic development, but he left us behind other states in both job creation and equality, when we should be leading the country, and the world. It’s time to stop with scams and invest in the public.

[Zephyr Teachout is a law professor at Fordham Law School and a former Democratic candidate for governor, Congress and attorney general.]