Unpacking the idea of “Islamophobia” 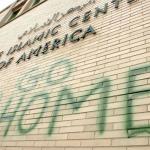 The term “Islamophobia” has passed into the popular language; it is ubiquitous in the media; websites clock examples and universities study its spread; but there is far too little attention to the ambiguities inherent in the term. In popular speech and the media, it is used to mean discrimination, prejudice, and violent attacks upon Muslims. Islamists use it to mean criticism of Muslim texts, or of their own ideas and practices. And they, their leftwing supporters, Western pundits, and even President Obama talk about “the Muslim world” or “Muslim lands” as if all Muslim-majority countries had the same politics and interests. Here are some recent examples:

The category of “anti-Muslim violence” on the website Islamophobia Watch: Documenting Anti-Muslim Bigotry includes the story of a Bristol drunk who threatened a hijab-clad woman with a knife, telling her to take it off and that hijabs are not allowed in England. This is clearly a hate crime.

We are in a linguistic minefield.

Even the origin of the term “Islamophobia” is disputed.  UK sources attribute its popularization to a 1997 publication by the anti-racist Runnymede Trust, but French sources trace it to the Ayatollah Khomeini, who said Iranian women who rejected the veil were “Islamophobic.”  The ambiguities in usage reflect these contradictory sources, one anti-racist, the other Islamist.

And are we really talking about a “phobia,” meaning an irrational fear?  There is no question that prejudice against Muslims exists and that nativist and right wing forces in Europe, the US and the UK often try to mobilize such prejudice for political ends. This is evident in electioneering by politicians like Sarkozy and Le Pen in France, demonstrations by English fascists, and demagogic campaigns in the US against the so-called “Ground Zero Mosque” and Debbie Almontaser, not to mention Koran-burning publicity stunts by Pastor Terry Jones.

But is it correct to say that these campaigns originate in a phobia rather than in calculated demagogy?  Racism does have its pathological and phobic aspects and, in some festering corner of the American psyche, anti-Muslim antipathy was no doubt fed by the election of a dark-skinned President with an African father and the middle name Hussein. On the other hand, the US has a history of similar anti-immigrant campaigns against the Irish, Eastern European Jews, Chinese, Mexicans, and Central Americans. Racial and ethnic stereotypes evoking fear of invasion by an alien people with a high birthrate and different language, religion, or customs have been mobilized against each of these populations in turn. And whites have used racial stereotypes and fears against African-Americans and American Indians from the beginning. But racism must be fought politically; to call it a phobia is to de-politicize it.

Certainly US South Asians and Arab-Americans have experienced an elevated level of threat since 9/11- in one case, a Sikh was killed by nativist thugs who thought he was a Muslim - and both mosques and Sikh temples have suffered arson and attacks by white racist terrorists. But we do not need to draw on the conceptual framework of the Muslim Right to combat such attacks; they can be dealt with using the usual methods of fighting discrimination and hate crimes. Mosques have also been subject to intense police surveillance in the US. But this is part of a wider problem of police overreach, the growth of the national security state, and the targeting of minority communities. These problems must be countered by a robust defense of civil liberties.

Such concrete instances of discrimination, whether or not they are called “Islamophobia,” can be fought under the rule of law. The way Islamists use the term is another story.  Because they do not admit the legitimacy of any criticism of sacred texts, they call anyone who criticizes Muslim laws on women “Islamophobic.”  The purpose of the term is to cut off criticism. In fact, the way Islamists use the term “Islamophobia” is a reason for others to avoid it when describing discriminatory acts or hate speech. Discrimination and hate crimes directed at individuals or institutions have remedies in law. But what is the remedy for criticism of sacred texts or a whole religion?

The remedy Islamists usually recommend is censorship—a violation of basic human rights. They also call for laws against blasphemy, as they are currently doing in Bangladesh, including an obligatory death penalty for such offenses. But what does this mean for Muslims who dissent from fundamentalist interpretations?  Who will protect their right to dissent if disagreement is considered hate speech?  Who will protect the rights of apostates and atheists from fundamentalists who say leaving the faith means they must die?  How can disagreements among Muslims even be discussed if the penalty is death?  By focusing on protection of religion rather than discrimination against individuals, the term “Islamophobia” blurs these questions.

Islamist use of the term also resonates with the belief that invasions of “Muslim lands” happen because the people who live there are Muslims—i.e., that these are wars over religion rather than over control of resources or territory. Some on the left have adopted this analysis. In a piece on Mali, for instance, Glenn Greenwald says: “As French war planes bomb Mali, there is one simple statistic that provides the key context: this west African nation of 15 million people is the eighth country in which western powers—over the last four years alone—have bombed and killed Muslims—after Iraq, Afghanistan, Pakistan, Yemen, Libya, Somalia and the Phillipines (that does not count the numerous lethal tyrannies propped up by the west in that region). For obvious reasons, the rhetoric that the west is not at war with the Islamic world grows increasingly hollow with each new expansion of this militarism.”

Greenwald ignores the fact that, in all these countries, Muslims are fighting on both sides of the conflict and the West is involved for reasons of geopolitics, not religion. An uncritical adoption of the framework of the Muslim Right can even lead to such ahistorical flights of fancy as in this speech by Michael Ratner at a Cageprisoners meeting in January 2012:  “I am convinced that Gitmo and other places like Gitmo only exist because its detainees are Muslims. I can’t imagine a Christian Gitmo. I cannot imagine a Jewish Guantanamo. It exists because of Islamophobia.”

It is essential to fight racism and prejudice against Muslims. But because the term “Islamophobia” echoes the worldview of the Muslim Right, it does more to confuse the issues than clarify them.

This article stems from the author's new book Double Bind: the Muslim Right, the Anglo-American Left, and Universal Human Rights

Meredith Tax has been a writer and political activist since the late 1960s. She was a member of Bread and Roses, and founding chair of International PEN’s Women Writers’ Committee. From 1994 to 2005 she was founding President of Women’s WORLD, a global free speech network that fought gender-based censorship. Meredith is currently the US Director of the Centre for Secular Space. She blogs at www.meredithtax.org.