‘Death of 1,000 Cuts’: Kellogg’s Workers on Why They’re Striking 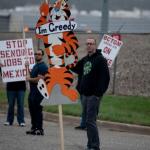 About 1,400 Kellogg’s workers at four US plants have gone on strike after their current union contracts expired and amid accusations that the cereal giant is offshoring jobs.

Trevor Bidelman, president of BCTGM Local3G and a fourth-generation employee at the Kellogg’s plant in Battle Creek, Michigan, explained workers are on strike against a proposed two-tier system for current and new employees proposed by Kellogg’s. Bidelman said Kellogg’s wants to not offer pensions to new employees, remove cost of living provisions, and make changes in holiday pay and vacations.

“We’re fighting for our future,” said Bidelman. “We made it very clear from the onset of negotiations that this was not something we’ll be able to accept.”

Shortly before the strike, Kellogg’s announced plans to cut 212 jobs at the Battle Creek, Michigan, plant over the next two years, including 174 positions represented by the union. The plant currently employs about 390 workers. Kellogg’s cited plans to streamline efforts and relocate cereal production to other facilities in North America as reasons for the job cuts.

“This is after just one year ago, we were hailed as heroes, as we worked through the pandemic, seven days a week, 16 hours a day. Now apparently, we are no longer heroes. Very quickly you can go from hero to zero,” added Bidelman. “We don’t have weekends, really. We just work seven days a week, sometimes 100 to 130 days in a row. For 28 days the machines run then rest three days for cleaning. They don’t even treat us as well as they do their machinery.”

The union took issue with Kellogg’s threatening to outsource jobs from the US to Mexico if workers refuse to accept their proposals.

“The company continues to threaten to send additional jobs to Mexico if workers do not accept outrageous proposals that take away protections that workers have had for decades,” said the BCTGM president, Anthony Shelton, in a statement announcing the strikes.

“It’s like a death of 1,000 cuts. They’re slowly eliminating jobs out of the Lancaster plant,” said Kerry Williams, who works in processing maintenance at the Lancaster, Pennsylvania, facility. “We had to work through this Covid for the last two years and they’ve just shown disrespect for the union name. They even want to remove our union logo from the cardboard cereal box.”

From October 2013 to November 2014, Kellogg’s locked out about 220 workers from their Memphis, Tennessee, plant while trying to reclassify some workers as “casual” workers to reduce wages and benefits.

The National Labor Relations Board ultimately ruled the lockout was illegal and ordered the locked-out employees to be reinstated with compensation for the wages and benefits they lost as a result of the lockout, but in 2016 a federal appeals court overturned that ruling.

Food production workers represented by BCTGM also went on strike at Frito Lay and Nabisco earlier this year, winning new union contracts a few weeks after walking off the job.

Kellogg’s reported a profit of $1.25bn in 2020. Cereal sales grew more than 8% in 2020 due to increased demand during the pandemic. The company approved a stock buyback program in February 2020 through December 2022 of $1.5bn. The CEO of Kellogg’s, Steven Cahillane, received around $11.6m in total compensation in 2020.

Kellogg’s has noted contingency plans are in place to bring in replacement workers, internally and through third parties, to avoid production disruptions.

A spokesperson for Kellogg’s said in a statement: “We are disappointed by the union’s decision to strike. Kellogg provides compensation and benefits for our US RTEC employees that are among the industry’s best. Our offer includes increases to pay and benefits for our employees, while helping us meet the challenges of the changing cereal business.”