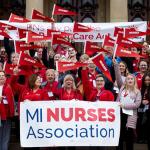 On September 24, ballots were counted in an election to determine the fate of the nurses union at the University of Michigan. By 58 to 41 percent (with less than 1 percent voting for “no union”), U of M nurses voted to stay with the Michigan Nurses (MNA), their union of 46 years. The vote defeated an attempted raid backed by the Teachers (AFT).

Efforts to decertify the MNA were led by national staff of the AFT, in collaboration with a group of former local officers who were upset by the MNA Board of Directors’ decision in late 2019 to remove Executive Director John Karebian. Karebian’s removal came after an investigation into complaints by dozens of MNA staff members of misconduct, including creating a hostile work environment and tampering with union elections.

Following his removal, evidence came to light that, while at the MNA, Karebian had been working behind the backs of the union’s elected officers to merge the MNA into the AFT. Within months of his departure from the MNA, Karebian was hired by the AFT, where he worked to break away the largest local—representing more than 6,000 nurses at the U of M—from the nurses’ union.

The so-called “independent union” made demagogic appeals to nurses that their dues money should all stay within the local instead of helping nurses elsewhere in the state. After resigning their offices (and union membership), the former leaders continued to refer to themselves in communications as the elected officers of the local, and tricked new hires into filling out phony membership application cards, complete with credit card information, which were filed as a showing of interest for a representation election.

In defeating the so-called “independent union” in this Michigan Employment Relations Commission representation election, U of M nurses showed that true strength comes not from independence, but from solidarity.

Ted McTaggart is a registered nurse at the University of Michigan's Northville Health Center and an interim chief rep for the Michigan Nurses Association.