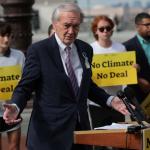 Democrats in Congress are engaged in an increasingly bitter debate over what to cut from their budget reconciliation package in order to appease party conservatives who refused the original $3.5 trillion price tag. Progressives fear that key climate provisions may be on the chopping block even as President Joe Biden prepares for international climate talks in Glasgow, Scotland.

Four Senate Democrats now say they will only support the reconciliation package and the bipartisan infrastructure deal at the heart of the Biden agenda if lawmakers approve new efforts to reduce domestic greenhouse gas emissions, which the president will need in negotiations at the United Nations climate conference next month.

“President Biden must be able to put a deal on the table that reflects what we then expect from the rest of the world, so we begin a downward trajectory in terms of the greenhouse gases that are going up in the atmosphere,” said Sen. Ed Markey (D-Massachusetts) at a Capitol Hill press conference with youth climate activists on Thursday.

Progressives and activists warn that elements of the bipartisan infrastructure bill are a Trojan horse for the privatization of public resources, such as transportation and water systems. Critics also say the separate Democratic proposal to invest $3.5 trillion in new social and climate spending over the next 10 years is not enough to address the nation’s various crises, including the growing cost of climate-related disasters. Researchers estimate the global economy could lose up to $23 trillion by 2050 due to climate change, while the United States loses more than $800 billion each year.

“Here’s the deal: Climate cannot and will not be cut. No climate, no deal,” Markey said to applause from activists with the Sunshine Movement and other groups. “Climate solutions must remain up front and center in this reconciliation package.”

Markey was joined by Senators Ron Wyden (D-Oregon), Tina Smith (D-Minnesota) and Chris Van Hollen (D-Maryland), three Green New Deal Democrats who remain focused on climate as debate over the reconciliation package splinters their caucus. The press conference was one of the latest swipes by liberals against conservative Democrats Kyrsten Sinema of Arizona and Joe Manchin of West Virginia, who threaten to derail the spending package or significantly reduce the scope and price tag. Votes from both Sinema and Manchin are needed to pass the legislation along party lines.

Manchin, a top recipient of fossil fuel contributions, told Senate Majority Leader Chuck Schumer as early as July that he would support only $1.5 trillion in new spending through the budget reconciliation process Democrats are using to bypass Republican opposition. The White House now says it would accept a $2.2 trillion deal, though Manchin has so far outraged progressives by refusing to budge on his spending cap, according to reports. The final price tag is expected to land somewhere between these two figures.

Manchin has also balked at Democratic proposals that would subsidize a transition from fossil fuels to renewable energy while pushing for infrastructure investments in the bipartisan bill that would help the fossil fuel industry stay afloat.

Two unnamed sources tell the New York Times that Sinema is requesting $100 billion in cuts to climate programs in the reconciliation bill, but a spokesman for Sinema’s office firmly denied this claim. Sinema has been criticized by activists and fellow Democrats for refusing to publicly discuss spending negotiations.

Markey said allied Democrats are committed to creating a Civilian Climate Corps, a proposal championed by the youth climate activists and the Sunrise Movement that would put young people to work building the next generation of climate resilient infrastructure. A $150 billion proposal to create a Clean Energy Performance Program that would incentivize utilities to make progress toward Biden’s goal of 80 percent clean electricity by 2030 is also non-negotiable, Markey said.

“We’re willing to listen to Sen. Manchin to try to deal with his concerns, but ultimately all of those programs that we talked about here today, we want to have in the final reconciliation bill,” Markey said.

Sen. Bernie Sanders (I-Vermont), the Senate Budget Committee chairman who originally proposed a $6 trillion spending package, also took aim at Manchin and Sinema this week and demanded to know what exactly the two holdouts would cut from the reconciliation bill to reduce spending.

“It’s not good enough to be vague, and I do not understand to be honest how in this time in world history you cannot talk about the crisis of climate change and tell us what you want to do,” Sanders told reporters on Wednesday.

Manchin has yet to say publicly which climate provisions he considers deal breakers, but the West Virginia senator with ties to the coal industry appears concerned about any federal efforts that would put the fossil fuels that have long dominated his state at a competitive disadvantage. Democrats are reportedly prepared to appease Manchin with tax credits for power plants that install expensive and controversial carbon capture technology, which environmentalists fear will lock in fossil fuels for decades to come.

Manchin has said market forces should guide the transition to clean energy rather than government intervention.

This view puts multiple Democratic priorities at risk, including proposed tax credits for renewables and the Clean Energy Performance Program, which would penalize utilities that remain reliant on dirty energy, as well as a proposed tax on methane emissions from natural gas production.

Democrats want to tax methane emissions to encourage the industry to clean up its act. The industry has pushed back, telling congressional leaders that a tax on methane pollution would be felt by consumers. Experts say the industry is being misleading. The tax would only penalize the industry for failing to capture and sell its own product — natural gas. The Biden administration is writing new regulations for reducing methane pollution from the oil and gas sector, a process that was stalled for years by the Trump administration.

“While cutting methane is a vital start, it is not enough,” said Lauren Pagel, policy director at the environmental group Earthworks, in a statement this week. “The U.S. must begin a managed decline of fossil fuels that centers industry workers and frontline communities who are most exposed to the health and climate impacts of fossil fuels.”

Progressives in the House are pushing to include a repeal of tax breaks and other subsidies for the fossil fuel industry in the reconciliation package, which would complement new investments in renewables. Rep. Ro Khanna of California, a Democrat leading the push, said repealing fossil fuel subsidies is a “key part” of fulfilling Biden’s climate agenda.

“That’s billions of dollars that can be used to invest in renewable energy, education, and childcare,” Khanna said in an email to Truthout. “This is our opportunity to make meaningful progress on climate and take away the special advantages that this polluting industry has been relying on for decades.”

As Sanders pointed out on Wednesday, the focus on fossil fuels among Democrats alarmed the oil and gas industry, which has spent more than $55 million lobbying Congress so far this year. Manchin and Sinema are among six Democrats who are considered allies by the fossil fuel lobby and received a combined $330,000 in contributions from political committees and lobbyists for the oil company ExxonMobil.

Whether climate provisions such as the methane tax, the Civilian Climate Corps and the new incentives for electric utilities will survive the Democrats’ efforts to “trim and slash” the reconciliation bill remain to be seen. Environmental justice provisions, including a plan to replace lead water pipes that put children at risk of serious health problems, may not make the cut as Democrats prioritize climate.

“I do not want my generation to have to look their kids and grandchildren in the eye and say ‘yes, we failed you, and the planet is now uninhabitable,’” Sanders said.

Mike Ludwig is a staff reporter at Truthout based in New Orleans. He is also the writer and host of “Climate Front Lines,” a podcast about the people, places and ecosystems on the front lines of the climate crisis. Follow him on Twitter: @ludwig_mike.