'Pro-Climate' Corporations Have Been Giving $$$s to Manchin and Sinema 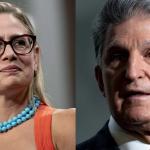 Corporations that previously trumpeted their support for sustainability and climate action have quietly given thousands of dollars to Sens. Joe Manchin and Kyrsten Sinema—the two right-wing Democrats most responsible for gutting the Build Back Better Act's clean energy provisions and otherwise preventing their party from passing a transformative version of its reconciliation package.

"Manchin and Sinema are standing in the way of the nation's largest climate bill ever."

That's according to a new analysis out Friday from Accountable.US, a government watchdog whose review of third-quarter corporate FEC filings shows which self-styled green companies have been donating to the two lawmakers now holding the planet hostage.

Corporations that have touted their environmental commitments only to turn around and give campaign cash to Manchin (W.Va.), an unabashed coal profiteer and defender of fossil fuel subsidies, and Sinema (Ariz.), who recently proposed cutting $100 billion in climate funding from the Build Back Better Act, include:

Throughout his 11-year career on Capitol Hill, Manchin has taken more than $1.5 million from corporate interests engaged in a lobbying blitz to undermine the Build Back Better Act, a popular piece of legislation that can be passed through the filibuster-proof budget reconciliation process but only with the support of all 50 Senate Democrats and all but three House Democrats.

In addition, Manchin, the chair of the Senate Energy and Natural Resources Committee, makes nearly $500,000 per year—roughly three times his congressional salary—from investments in his family's coal empire, raking in a total of $5.2 million since joining the Senate in 2010 while refusing to answer questions about it.

Moreover, the West Virginia Democrat is Congress' top recipient of oil and gas donations this election cycle. He accepted $400,000 from fossil fuel industry PACs and executives in the last quarter alone and then axed one of the reconciliation bill's key measures to decarbonize the nation's power grid, exemplifying why an ExxonMobil lobbyist praised the lawmaker earlier this year.

"As if it wasn't enough that wealthy polluters have bankrolled Sen. Manchin during his fight against common-sense climate solutions—now companies that claim to value protecting the environment have opened their pocketbooks as well," Kyle Herrig, president of Accountable.US, said in a statement.

Manchin's self-interested effort to torpedo the Clean Electricity Performance Program and other policies to reduce greenhouse gas pollution and promote renewable energy persists even as the fossil fuel-driven climate emergency threatens his constituents with the worst flood risks in the nation.

Meanwhile, as he endeavors to dilute the Build Back Better Act's proposed green public spending as much as possible, Manchin has been attempting to get the widely criticized bipartisan Infrastructure Investment and Jobs Act passed first, which would give him and other conservative congressional Democrats the leverage necessary to tank more ambitious plans to hike taxes on the rich to fund an expansion of the welfare state and climate action.

Manchin was the chief architect of the energy portions of the bipartisan physical infrastructure bill, which contains $25 billion in potential fossil fuel subsidies as well as $11.3 billion in funding that would benefit his family's coal brokerage.

Manchin demanded sole jurisdiction over the Clean Electricity Performance Program, and then killed it in the reconciliation bill.

In the bipartisan infrastructure bill he supports, he got $11.3 billion included that could free up more waste coal to burn.https://t.co/Maydi0gAYW

Sinema, for her part, has accepted over $920,000 from corporate interests opposed to the Build Back Better Act since joining Congress in 2013. While Manchin's fossil fuel-related corruption is more extensive, Sinema has accumulated her own conflicts of interest.

For instance, while padding her campaign coffers with at least $100,000 from Big Pharma and Wall Street last quarter, Sinema has come out against allowing Medicare to negotiate lower drug prices. She has also single-handedly blown up Democrats' plan to raise taxes on big businesses and the wealthy despite voting against the GOP's corporate-friendly 2017 tax law and campaigning against it during her 2018 senatorial run.

In addition to obstructing progressive tax reforms, Sinema has joined Manchin in fighting to slash the Build Back Better Act's original top-line spending level of $3.5 trillion over 10 years by as much as half or more—rejecting an average yearly expenditure of $350 billion on child care, green energy, and other vital programs as "fiscal insanity" despite voting for every $700 billion-plus annual Pentagon budget.

As Herrig put it, "Manchin and Sinema are standing in the way of the nation's largest climate bill ever."

"If corporations are serious about their stated commitments to protecting the climate," he added, "now is the time to put their money where their mouths are."