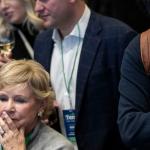 A coalition of progressive advocacy organizations warned Wednesday that conservative Democrat Terry McAuliffe's failed gubernatorial bid in Virginia offers a cautionary lesson for the rest of the party ahead of next year's midterms: Either excite voters with a bold agenda or risk losing power to the GOP.

As corporate Democrats rushed to baselessly pin McAuliffe's loss on progressives in Congress, the Battle Born Collective, Justice Democrats, the Sunrise Movement, and United We Dream Action argued in a joint statement that the former Virginia governor's campaign for his old post was "designed to fail."

"What happened in Virginia is what happens when Democrats fail to take on the GOP's divide-and-conquer racism and motivate people to turn out," the progressive coalition said. "The McAuliffe campaign had no comprehensive pro-worker economic message against a literal private equity magnate."

Far from offering Virginians a clear policy agenda and a positive vision for the future, McAuliffe—who previously served as chair of the Democratic National Committee—"ran the milquetoast campaign he wanted to run," the groups continued. "Every other word he uttered was 'Donald Trump' instead of focusing on the issues voters cared about the most."

"This was a controlled experiment for what NOT to do in 2022," the coalition added. "This is what it looks like when Democrats get caught flat-footed and let Republicans dictate the terms of the debate by manufacturing a fake 'education crisis.' It does not have to be this way. There is still time to adopt an inclusive economic message that crowds out racist dog whistles... This should be a wake-up call for Democrats: Give people something to vote for or watch yourselves become the very thing they resoundingly vote against."

McAuliffe's loss to Republican Glenn Youngkin and an unexpectedly close gubernatorial race in the blue state of New Jersey were seen as potential harbingers of what's to come in the 2022 midterms, as Democrats cling to narrow majorities in both chambers of the U.S. Congress.

"The circumstances in the two governor's races all but confirmed the collapse of the coalition that propelled Democrats to power during the Donald Trump administration and Joe Biden to the presidency in 2020," the Washington Post reported late Tuesday. "In the election's wake, there were fresh doubts in the party about Biden's ability to push his domestic agenda across the finish line, and to repel the new attacks Republicans have opened on culture fronts, especially over schools."

But progressives argued that Democratic losses in 2022 are not inevitable—as long as the party learns from McAuliffe's defeat and adjusts its message and actions accordingly.

In a column for Common Dreams on Wednesday, progressive writer Richard Eskow noted that McAuliffe's campaign website was filled with "vague platitudes and promises" instead of straightforward and popular economic messaging—a serious problem in a race in which voters ranked the economy as the top issue.

The "Economy" section of McAuliffe's website, for instance, pledged "critical investments in building and training the workforce of the future and ensuring that people of all ages have the skills they need to be successful in the jobs of tomorrow."

"Terry will achieve this through targeted investments in workforce training and development, partnering with businesses and our educational institutions to re-skill and retrain Virginians, and reimagining our K-12 education system so that every child has access to a world-class education and is workforce-ready upon graduation," the page reads.

Eskow further observed that, in lieu of a compelling economic platform, McAuliffe attempted to "make the election a referendum on Donald Trump," a strategy that "was a failure since Trump wasn't on the ballot."

In September, McAuliffe sided with corporate Democrats in Congress by describing the Build Back Better Act's original $3.5 trillion top-line spending level as "too high"—even as polling from the same month showed that nearly 60% of Virginians supported that amount of spending on Democrats' social spending and climate package.

The reconciliation bill has since been cut roughly in half and stripped of popular provisions such as dental and vision benefits to appease Sens. Joe Manchin (D-W.Va.), Kyrsten Sinema (D-Ariz.), and other conservative Democrats in Congress.

In a statement on Wednesday, the We Demand More Coalition—which is composed of dozens of women-led advocacy groups—said that "last night's elections in Virginia and across the country demonstrated that if Democrats want to remain competitive, they must deliver for the voters who turned out for them in 2020."

"The Build Back Better Act is a critical investment toward building an economy that truly works for all women, caregivers, and families across demographics and geographic locations," the coalition added. "While we are grateful to our elected leaders as they fight for these historic investments, last night's elections showed us that voters need them to get the job done."

"McAuliffe's loss in Virginia shows why passing a robust recovery plan should be the top priority for congressional Democrats," Kimelman-Block said Wednesday. "If Democrats want to keep their majorities in Congress next year, they should listen to the progressive champions pushing for a strong Build Back Better plan that lifts everyone up today while investing in our shared future."