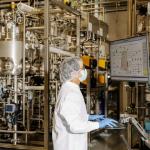 A huge facility designed to produce hundreds of thousands of pounds of cultured meat opened Thursday in Emeryville — a significant step forward in a nascent yet rapidly growing industry where meat is grown from animal cells without any need for slaughter.

The facility, part of a new, $50 million, 53,000-square-foot campus for Berkeley food tech company Upside Foods, is billed as the first of its kind in the world and ready for commercial scale. While other companies have made cultured meat, also known as cultivated meat or lab-grown meat, they’ve typically worked out of smaller laboratories.

The U.S. government still hasn’t approved the sale of cultivated meat, but Upside Foods Chief Operating Officer Amy Chen said the new facility is proof that the technology is ready.

Until the meat is legal to sell, the company will be hosting tours and testing products. Once it gains approval, Upside’s plan is to start supplying restaurants, specifically Dominique Crenn’s three-Michelin-starred Atelier Crenn in San Francisco. After introducing the meat to the public through chefs, the next move is into grocery stores — similar to the rollout followed by Impossible Foods, the Redwood City maker of the convincingly beefy burgers made from soybeans. Unlike plant-based meats, cultivated meat is actually animal-based, fleshy meat.

Located in a residential neighborhood near the Public Market Emeryville, Upside’s new space looks like a brewery on steroids. It’s capable of producing 50,000 pounds of meat per year, with room to eventually expand to 400,000 pounds.

Huge tanks known as bioreactors line the main room, where cells harvested from live animals will be bathed in nutrients such as glucose, vitamins and amino acids. The bioreactors create an environment similar to an animal’s body, and the nutrients feed the cells until they get bigger, forming an unstructured, ground-meat-like product. An additional, more complicated step involves creating a scaffolding that allows the cells to grow together and form the fibers and texture expected from a whole cut of meat, like a steak or chicken breast.

Advocates say the process not only avoids killing animals but, because it requires less water and land, is a more efficient, climate-friendly way to produce meat. That’s partially because the process is significantly faster, shrinking the three years it takes for a cow to mature to a matter of weeks.

That sales pitch has led to enormous interest in the industry, with Upside drawing more than $200 million in funding, according to Crunchbase. San Francisco cultured-meat competitor Eat Just, which is also known for its plant-based egg substitute Just Egg, has nabbed more than $450 million.

Audrey Gyr, a startup specialist with the Good Food Institute, a nonprofit that advocates for plant-based and cultivated meat, said Upside’s new facility is a testament to how much the industry has grown over the past few years — and how much it will continue to grow. A 2021 McKinsey & Company report predicts the market for cultivated meat could reach $25 billion by 2030.

“The technology and innovation has advanced considerably to enable them to build this kind of facility and move beyond the lab,” said Gyr, who is not affiliated with Upside.

When Upside Foods, previously known as Memphis Meats, started in 2015, it was the first cultured-meat company in the world. Now, there are at least 80, according to the Good Food Institute.

Gyr said there are other cultivated-meat companies planning production facilities similar to Upside’s, which has rooms for harvesting meat, cooking meat, working with raw meat and testing recipes. For example, cultured salmon startup Wildtype has announced plans for a facility and sushi tasting room in San Francisco, though it will produce just 50,000 pounds per year.

In addition to being the first to construct a facility, Upside is also showing off some notable advances in the industry, according to Gyr. The Berkeley company can grow cuts of meat — chicken breast is the company’s first planned product — while many others are able to produce only ground meat. And, given the right cells to culture, its facility can produce any kind of meat, from duck to lobster.

Upside says it is ready to start production as soon as it gets a green light from the U.S. Department of Agriculture and the Food and Drug Administration, which agreed to jointly regulate the new industry in 2019 but haven’t approved the sale of any cultured meat yet. So far, the only country to allow the sale of cultivated meat — specifically chicken from Eat Just — is Singapore.

The two U.S. agencies have been mostly silent about the industry since 2019, apart from an announcement in September soliciting comments on how to label cultivated meat. The USDA and FDA could approve specific products like Upside’s chicken breast on a case-by-case basis before determining industrywide language, according to Gyr. Regardless, there’s no established timeline.

Chen declined to say how much Upside’s first meat will cost whenever it’s sold, but suggested it would be on par with higher-end chicken such as pasture-raised birds.

Despite the climate-focused missions of cultivated-meat companies, it’s still unclear whether growing meat from cells is better for the environment than animal agriculture. That’s because there hasn’t yet been a commercial-scale production facility for researchers to examine; the few available studies are based on speculation.

An often-cited 2015 study in Environmental Science & Technology, for example, agreed with food tech companies that cultured meat would require less land and water but stated, “Those benefits could come at the expense of more intensive energy use.” Other speculative studies determined that the greenhouse gas emissions of cultured meat would likely be less than traditional beef but not necessarily poultry or pork.

More recently, a 2019 study by two University of Oxford researchers suggested this greenhouse gas comparison might be misleading because cows produce methane, and a factory would produce carbon dioxide. Methane lingers in the atmosphere for about 12 years, much less than carbon dioxide’s long life of as much as 1,000 years.

Upside’s new facility, Gyr said, represents “an amazing opportunity to learn more” about what the reality will be.

Chen said Upside’s facility uses 100% renewable energy and is already working through an analysis of its total environmental impact, with the hope that a third party will verify the company’s sustainability claims by mid-2022.

One of the biggest challenges, though, will be persuading the masses to buy cultivated meat. Chen said Upside will need to demystify the process to the public, which she called a key goal of the new production facility.

The company plans to give virtual tours beginning this week, then host in-person tours starting next year. Visitors will be able to peer into the facility from large windows all over the building.

“Anyone who didn’t think this could be a reality has a chance now to see a vision come to life,” Chen said.