How NYC Taxi Drivers Took on Predatory Lenders and Won 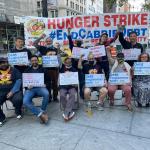 After a two-week hunger strike and two months of sit-ins, dozens of taxi drivers in New York City hosted a long-awaited celebration outside City Hall on November 10.

On November 3, New York City reached an agreement with the New York Taxi Workers Alliance (NYTWA), the union fighting to relieve drivers of thousands of dollars in debt they owe for medallions, the physical permits to operate taxis. According to the NYTWA, the average debt owed on medallions by taxi drivers is $600,000.

“Today marks a new dawn, a new beginning for a workforce that has struggled through so much crisis and loss,” said Bhairavi Desai, Executive Director of NYTWA, in a statement. “Today, we can say owner-drivers have won real debt relief and can begin to get their lives back. Drivers will no longer be at risk of losing their homes, and no longer be held captive to debt beyond their lifetime.”

Zohran Kwame Mamdani, a New York State Assemblymember representing the diverse borough of Queens, participated in the 15-day hunger strike as an act of solidarity with the taxi drivers, many of whom live in his district. On day 12 of the hunger strike, Mamdani shared the words of Douglas Schiffer, a taxi driver who ended his own life due to the financial stress he endured while in debt.

“Wake up and resist,” Mamdani read. “I hope with this public sacrifice I make now that some attention to the plight of drivers will be made to save them and it will not be done in vain.”

A 2019 New York Times investigation revealed that at least nine taxi drivers faced the same fate and took their own lives due to crushing debt. One of those drivers was Kenny Chow, an immigrant from Myanmar who took out a $700,000 loan to purchase a medallion. His brother Richard Chow, also a taxi driver with hundreds of thousands in medallion debt, participated in the 15-day hunger strike in his memory.

“Finally, we made history, and I’m very proud,” Chow told The City. “I’d like to see my brother alive. If it were three years ago, my brother would be here for this celebration.”

New York City taxi drivers — 94 percent of whom are immigrants — took out hundreds of thousands of dollars in loans to cover the cost of taxi medallions because they viewed it as a ticket to the middle class in the United States. In 2004, the average taxi medallion cost was $200,000 but by 2014, then-Mayor Michael Bloomberg inflated the price of medallions by over 500 percent to $1 million in order to raise revenue. But in 2015, as unregulated ride-sharing apps like Uber and Lyft skyrocketed in popularity, cab revenues declined by 36 percent, dropping the value of medallions to just $80,000, and leaving tax drivers saddled with debt and trapped in predatory lending agreements.

The agreement reached between the city, the taxi drivers union, and Marblegate Asset Management — a private equity firm that is the largest holder of medallion loans — will restructure the crushing debt for thousands of taxi drivers. The terms of the restructure would limit loans to a maximum of $200,000, which then decreases to $170,000 with a grant from the city of $30,000. The interest rate will be capped at 5 percent over a 20-year term, which will amount to monthly payments of $1,122.

The NYTWA is hopeful that this organizing victory has mapped out a way to curb predatory debt, so long as there is both funding and political will.