New England Once Hunted and Killed Humans for Money. We’re Descendants of the Survivors 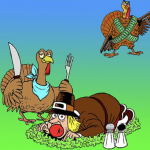 For more than 10,000 years, the Wabanaki peoples have been living in a region called the Dawnland. Captain John Smith rebranded the area “New England” in a map he made in 1614. He and the other colonial settlers renamed rivers and villages to claim the land for themselves and erase Native people from their homelands. But that wasn’t enough. Eventually colonial officials introduced a grisly incentive to hasten that erasure: bounties for dead Native Americans.

Yes, the settlers whom many Americans mythologize at Thanksgiving as peace-loving pilgrims were, just a generation later, issuing official government orders putting a price on the scalps of Indigenous children, women and men.

The reward: about $12,000 in today’s dollars for the scalp of a man, half that for a woman, and a bit less for a child. It was nearly as much as a soldier would earn in two years. Sometimes bounty hunters were granted the land of the people they scalped – thousands of acres, which scalpers used to found towns that they named after themselves, like Westbrook, Maine; Shirley, Massachusetts; and Spencer, Massachusetts, to name just a few.

According to our research, there were at least 69 government-issued scalp edicts across the Dawnland from 1675 to 1760, and at least 50 scalp edicts issued elsewhere in the United States until 1885. The proclamations targeted specific tribes by name – and occasionally marked specific tribes safe because they were “allies” of the authorities. But neither scalpers nor authorities had much way of knowing the tribal affiliations of the people whose scalps they took, so for centuries bounties were a license to kill all Indigenous people.

We are part of the team behind the new short documentary Bounty. In New England alone, we’ve uncovered government payments for 375 human scalps, submitted in 94 separate claims and equaling government payments of millions of dollars in today’s money. More documents may be buried in colonial archives.

In 1755, the lieutenant governor of the province of Massachusetts Bay, Spencer Phips, issued an edict declaring the Penobscot people a target of extermination and commanding “his Majesty’s Subjects of this Province to Embrace all opportunities of pursuing, captivating, killing, and Destroying all and every of the aforesaid Indians”.

The Phips Proclamation lives on in collective memory because members of the Penobscot Nation and other Wabanaki peoples sometimes post it on the walls of tribal government offices as a kind of reminder: You tried to kill us, but we are still here. The United States was built on our lands and on top of the bones of our ancestors. We live and thrive on these lands today and are sovereign nations with the right to self-determination.

In our film, Penobscot parents and children read and react to one of the dozens of government-issued bounty proclamations that motivated colonial settlers to hunt, murder, and scalp Indigenous people.

The lives that were destroyed by scalping were tallied up in a ledger and the human remains incinerated to prevent double payment. But the digits in that ledger represented murdered mothers, fathers, two-spirits, daughters, sons, aunts, uncles, sisters, brothers, cousins and infants, usually rendered nameless in the historical record.

Of course, those deadly bounties were only one of the tools deployed by the European settlers to make this land theirs. The legacy of those wrongs manifest today in a range of forms: the epidemic of missing and murdered Indigenous women and girls; the fact that Indigenous people have the highest rate of death at the hands of police, the highest suicide rate among veterans, a disproportionate rate of death from Covid-19, and the highest incarceration rates in the US; continued violations of Indigenous sovereignty by state and federal authorities and private extractive industries; the continued use of Indian mascots; and the celebration of national holidays, like Thanksgiving and Columbus Day, that dishonor Native peoples.

In spite of countless wars, massacres, land ordinances, and extermination orders, today there are over 5 million Indigenous people in the United States who are citizens or members of more than 600 tribal nations. And while the legacy of anti-Native brutality remains, most Native people are thriving and modeling for all people in the US how to live in caring communities based on mutual respect, reciprocity, and reverence for the land, water, and all our relations.

In this season, as families and friends gather to share gratitude, let us seek new opportunities to learn about our collective history, in all its complexity, and embrace a future built upon mutual understanding and respect for our neighbors.

Maulian Dana is the Penobscot national tribal ambassador. Dawn Neptune Adams is a Penobscot Nation citizen and a member of Sunlight Media Collective. Adam Mazo is a co-founder of Upstander Project. Together they are part of the film-making team behind the documentary film Bounty