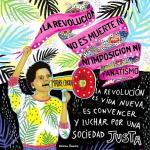 In Chile’s first-round presidential elections, former student leader for the leftist Apruebo Dignidad coalition Gabriel Boric has obtained over 25% of the vote, whereas far-right lawyer for the Partido Republicano Jose Antonio Kast has won 28% of the vote, meaning the two will face off in a tense runoff in just over three weeks.

Many of the statements by developed-country leaders at the COP26 summit in Glasgow are at odds with their actual climate policies, and with what they say in other settings. Their short-sighted strategy ultimately benefits no one – including the powerful corporate interests whose immediate financial interests it serves.

The RCMP conducted “military-style” police raids on members of the Gidimt’en Clan of the Wet’suwet’en Nation and supporters who were blocking construction of a multibillion-dollar natural gas pipeline.

The Red-Green Alliance picked up a quarter of the vote in Copenhagen. The municipal elections elsewhere in Denmark showed small gains for the left, while the ruling Social Democrats took heavy losses in the four biggest cities.

At a time of deep political and social crisis, mass movements can only bring to the streets a sweeping tide of discontent. It is up to the Opposition parties to seize the momentum. Whether or not it will depends on how far it can revisit and challenge old ideas, adapt to the new normal, and engage with groups hit hardest by the pandemic.

[Moderator’s note: November 23 is the birthday of Moyano, a women’s leader, a revolutionary, an organizer in the town of Villa El Salvador, Perú. She opposed the coercion by the guerrilla group Sendero Luminoso over the efforts of working class women to secure rights and basic livelihood. Senderistas murdered her in public, in front of her children, in 1992.

Shortly before her assassination, she wrote:

“Finally, neighbors, the revolution is an affirmation of life and of individual and collective dignity. It is our ethic. Revolution is not death, nor imposition, nor submission, nor fanaticism. Revolution is new life – the belief in and struggle for a just and dignified society – in support of the organizations which the people have created, respecting their internal democracy, sowing new seeds of power in a new Perú. I will continue to stand with my people, with the women, youth, and children; I will continue to fight for peace with social justice. Viva la vida”

The Dallas band MAYTA honors Moyano’s story with their song, “Mujer Villa.” The band is named after the Incan emperor Mayta Cápac and is anchored by Renato Rimach and his brothers Victor and Ivan.]

The Eye of the Beholder  Fabio Lanza / Made in China (Canberra)