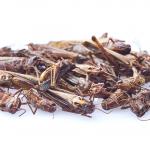 On November 12, the European Commission, which is sort of like the executive branch of the European Union (EU), officially approved the sale of the migratory locust as a food. This is only the second insect to see approval for food use. It won’t be the last.

The migratory locust is a grasshopper, like all locusts; the word “locust” is applied to certain grasshopper species that occasionally experience big swarming events. It’s found throughout the Eastern Hemisphere, in the temperate parts of Africa, Asia, Australia and New Zealand. It’s also present in Europe, although not as common there as it once was. It’s of moderate concern as an agricultural pest; other species of locust were responsible for the devastating swarms in East Africa last year, although the migratory locust did do some significant damage in the southern part of the continent.

Migratory locusts, like many other species of grasshopper and cricket, are pretty widely eaten; this particular species has long been a part of diets in parts of Zambia, Cameroon, Botswana and several other countries in central and southern Africa, as well as in some Southeast Asian countries such as Thailand and the Philippines. They’re also quite tasty, described as being similar to other grasshoppers in flavor, a little bit nutty and savory.

In the member countries of the EU, though, there is little to no recorded history of the migratory locust being part of the diet. So the EU, after a study this summer found locusts to be safe to eat (which was already perfectly well known) and, in curious phrasing, “not nutritionally disadvantageous,” declared that the migratory locust would be legal to sell in its member states under a “novel food” program. It’s only novel to the EU, of course.

This marks the second approval in the past year of insects as food for people, the first being the yellow mealworm. The locust approval came about after a Dutch company requested permission to sell its locust wares within Europe. While you can, sort of, find insect-based foods and ingredients in the EU countries, it was due to some ambiguity in the EU’s rules that seemed to leave a loophole for whole insects. (This new approval is specifically for frozen, dried or powdered forms of the locust.)

Over the past few decades, there’s been a steady push for more edible insects in many countries where it’s currently  uncommon, including those in Europe and in North America (not including Mexico, which has a long history of making very delicious food with insects). Insects are advertised as being, to put a more affirmative spin on the EU’s weird language, very healthful indeed: high in protein, fiber and various necessary minerals and vitamins. Insects such as the locust are also, according to studies that are mostly relying on modeling owing to the small commercial nature of insect farming, capable of requiring far less water, insecticide and land than an equivalent caloric amount of, say, beef.

The EU’s approval of the migratory locust as food will not be the last such verdict. According to the Washington Post, research has already been done on house crickets, although they have not yet been formally approved for sale.