‘His Struggle is Ours’: Biopic of Slain 60s Rebel Hailed in Brazil with Anti-Bolsonaro Chants 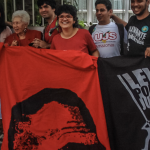 The CIA considered him Che Guevara’s successor when it came to igniting new guerrilla movements in Latin America.

Brazil’s military dictatorship, whose security agents ambushed and killed him in São Paulo in 1969, called him public enemy No 1.

Now, more than five decades after his slaying, the communist revolutionary and poet Carlos Marighella has been reborn as a symbol of political resistance to Jair Bolsonaro’s far-right administration thanks to a new film about his life.

When the lights come up at the end of sessions of Marighella, it is common to hear anti-Bolsonaro chants from cinema-goers, inflamed by the film and their anger at Brazil’s dictatorship-admiring president, whom many blame for a Covid disaster that has killed more than 615,000 people.

“Marighella is the antagonist supreme when you compare him to Bolsonaro – and this all erupts in the cinema,” said Mário Magalhães, whose biography of the rebel, Marighella: The Guerrilla Who Set the World Alight, inspired the film.

One of the founders of the rebel group National Liberation Action (ALN), Marighella was the key exponent of more radical resistance to Brazil’s 1964-85 dictatorship at a time when being a leftist was punishable with death. Today, he is despised by Brazil’s extreme right for his leading role in the armed struggle against its military rulers, who killed at least 434 opponents and tortured thousands more in a bid to silence their opponents.

Marighella’s story was little known in and outside of Brazil until 2012, when Magalhães’s biography was published and the subject’s granddaughter gave a copy to the Narcos star Wagner Moura, reportedly telling him: “We’ve got to make a film.”

For years the Brazilian actor, who played Pablo Escobar in that Netflix series, tried to do just that, in what was his first film as a director.

But in a sign of the increasingly authoritarian political climate that has engulfed Brazil under Bolsonaro, a former army captain who reveres the dictatorship’s generals and torturers, the 155-minute film only hit Brazilian screens last month.

The film premiered at the Berlin film festival in early 2019 but its Brazilian debut was repeatedly cancelled by the government film agency Ancine over supposed bureaucratic issues, which the film’s director denounced as “an absolutely clear case of censorship”.

“The cries you hear in the cinema are also a political reaction to efforts to censor the film,” said Magalhães, the biographer. “It’s a democratic celebration against intolerance and against an authoritarian government which caused the deaths of millions of people during the pandemic.”

Marighella’s producers have emphasized the protagonist’s continued political relevance at a moment when another South American struggle for democracy is under way, as Brazil’s gears up for a presidential election next year. The film’s Brazilian premiere took place at a camp organized by Brazil’s Landless Rural Workers Movement (MST), in Bahia state, where both Marighella and Moura were born.

Lucinéia Durães, an MST director who was among the 3,000-strong audience, said that several days before the screening, masked men had launched an attack on another nearby landless people’s camp, firing shots and burning six vehicles. Durães said such attacks, which she blamed on far-right pro-Bolsonaro groups, were common.

“Marighella has again become a symbol because his struggle is our struggle,” Durães said. “We see today’s Brazil when we watch the film, a Brazil in which those who fight are seen as criminals.

“Marighella was accused of terrorism. So are we. But all we want to do is democratize the land and for every single Brazilian to be able to eat and have a home,” added Durães, who believed the film’s key message was that “fighters died, but the dream of their struggle lives on”.

“We must keep fighting for a democracy that represents Black and indigenous citizens,” she said.

“We must venerate and broadcast the meaning of the struggle of those who, like Marighella, died to ensure that the Brazilian people could live democratically,” said Lula, who polls suggest will defeat Bolsonaro next year.

Lula called “companheiro Marighella” part of a long line of Brazilian rebel heroes, including the 17th century anti-slavery resistance leaders Zumbi and Dandara, whose stories had for too long been smothered.

“It is up to us to retell a little bit of this country’s history,” Lula told filmgoers.