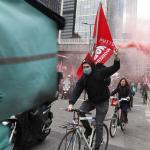 From Los Angeles and London to São Paulo and Moscow, on their bikes and motorcycles, in sweltering heat or bone-chilling cold, they’ve been the skeleton key that has pried open pandemic isolation by delivering everyday necessities, and comforts, to families around the globe.

Yet these gig economy drivers share something else. Often struggling to make ends meet, they mostly lack basic employment benefits such as a minimum wage, health insurance, paid time off, or the right to appeal if they’re fired.

Now, however, that may be changing.

Last week, the 27-nation European Union unveiled a proposal that would give them the same rights as employees of traditional brick-and-mortar businesses.

And that was just the latest of a growing number of challenges to the business model that has underpinned the expansion of gig economy companies worldwide: firms like Doordash, Grubhub, UberEats and its ride-sharing parent, Uber, in America; or Deliveroo and Just Eat in Europe.

Styling themselves as mere matchmakers – a high-tech connecting point between ostensibly independent “contractors” and customers – the firms have escaped the wage and benefits overhead that traditional businesses have to pay.

When Uber led the rush toward app-based services a decade ago, that seemed like a win-win proposition. Not only did it promise convenience and lower costs for consumers. It would give workers – first, Uber drivers, now tens of millions of delivery bikers as well – a chance to choose their hours and make some money.

That arrangement still works for those who do delivery work or driving as an occasional side gig to top up their earnings from another job. But recently there’s been a swell of complaints from the many more who rely on their gig earnings to feed themselves and their families.

That swell has intensified over the last two years, with drivers braving not just the elements and the risk of accident, but the pandemic.

In the United States, the jury on gig worker benefits is still out. Though the federal government has signaled support for greater rights, the key decisions are being made at the state level. The outcome of the highest-profile case so far is in the balance: A California law giving gig workers significantly greater rights was overturned by a ballot proposition which is now headed for a fight in the courts.

Yet elsewhere, the trend is clearer.

Delivery drivers have staged strikes across Latin America. The campaign began with an online video posted by a gig worker in the Brazilian capital of São Paulo. He alleges that when a flat tire on his bike delayed a delivery, he found himself blocked from his gig company’s app.

Similar cases have been going before courts around the world. Most rest on the same fundamental argument: that far from being “independent contractors,” gig workers are every bit as answerable to their bosses as employees in other businesses. In fact, they have even less independence, since decisions over when and where to send them, and whether to fire them, rely on computer algorithms.

How will policymakers, and the gig companies, respond? And can these businesses, most of which are not yet making a profit, offer basic rights to their workers and still be viable?

In Europe, the pendulum is now moving in the direction of the workers.

Earlier this year, Britain’s Supreme Court upheld a claim for a minimum-wage guarantee by two dozen Uber drivers. It ruled that they were not, in fact, freelance “contractors,” because of the wide array of tools the company used to exert control over them.

Uber had a responsibility to ensure they received the national minimum wage and paid holiday time, the court ruled.

A number of EU states have also moved to improve the gig workers’ lot. France has proposed letting drivers elect union representatives to negotiate better working conditions. In Italy, a deal has been reached requiring delivery businesses to spend hundreds of millions of dollars to improve working and safety conditions for their drivers – though stopping short of recognizing them as full-fledged employees.

In August, however, Spain passed a law requiring Uber and the gig economy delivery platforms to offer that very recognition.

Last week’s proposal from the executive arm of the EU, the European Commission, in effect proposed this approach for all member states. It said that the burden of proof to demonstrate that companies were, in fact, just acting as matchmakers must rest with the companies. Workers who were not genuine freelancers – as many as four million of them, according to EU estimates – must enjoy the same rights and protections as formal employees.

One major gig business – Just Eat, Europe’s largest – has said it will respect that, but most others are opposing the proposal. Uber argues that it would jeopardize the jobs of thousands of its drivers, and hurt the customers who rely on them.

Still, Uber has suggested that a way might be found to retain the gig economy’s “flexibility” – in other words, the existing business model – while “allowing platforms to introduce more protections and benefits.”

It remains to be seen what emerges from the lobbying and negotiations that will now ensue. The Commission proposal has to go through the EU legislative process before a vote, in its final form, by the European Parliament. It’s likely to be a year or two before that happens.

But the tide does seem to be turning to the workers’ advantage, and expanded benefits and protections appear inevitable.

For the app-platform companies, the gig may not be up.

But it is, undeniably, changing.