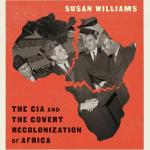 For those who believe Africa was decolonized decades ago, it’s time to wake up from dream-world. True, colonial European powers no longer impose direct rule on African nations, which are nominally “independent.” But those European countries, beaten back from their African colonies in the second half of the twentieth century, had no intention of losing their investments or access to Africa’s vast mineral wealth. So, with the help of groups like the CIA, Europeans and Americans covertly recolonized the continent, with bribes, murders, loans, privatizations (aka looting) and the installation of western-friendly regimes.

The latest and most noxious of these colonial iterations is the U.S. military’s AFRICOM, although a French oligarch “controls 16 West African ports through bribery and influence peddling,” as Margaret Kimberley recounted in Black Agenda Report, December 1. “Canadian companies control gold mining in Burkina Faso, Mali and D.R.C.…British soldiers are still stationed in Kenya.” So the west never stopped strangling African nations. In this effort, the vile 1961 assassination of Patrice Lumumba was key. Needless to say, the CIA was involved up to its eyeballs.

As Congo’s first freely elected leader after the Belgian rout, Lumumba made the honest mistake of trusting western democratic ideals.  Then, when he discovered they were phony, he tilted – very slightly – toward the Soviets. That sealed his fate. “President Eisenhower authorized the assassination of Lumumba,” writes Susan
Williams in her newly published book, White Malice: the CIA and the Covert Recolonization of Africa. The consequences were ghastly. After Lumumba’s murder and dismemberment, for well over three decades, “the Congo was ruled with an iron fist by Mobutu – a dictator chosen by the U.S. government and installed by the CIA.”

Now Congo again leaps into headlines – not because of its rich uranium deposits, so coveted by Washington in the 1940s and ‘50s, but because of cobalt and other minerals essential to a green energy transition. Mining cobalt is an ugly business. Roughly 40,000 cobalt miners are children, out of 255,000 Congolese cobalt miners. They work in nearly slave labor conditions, earning less than $2 per day. Their intensive labor is extremely hazardous and there have been charges that AFRICOM indirectly oversees these mines. Context is key here. D.R.C. is an extremely poor country. Life expectancy is 60 years. But the U.S. craves D.R.C. resources, as it has, going back to the 1940s. So pretty much anything goes.

Once again in Congo, Washington finds itself snarling imbecilically at a communist competitor – this time China. But unlike the struggle with the U.S.S.R., which had safely sequestered its economy from western capitalism, China is the U.S.’s biggest trading partner; the two economies are inextricably intertwined. Insulting and threatening someone you regularly do business with may seem cretinous to the casual observer, but somehow it’s the best the American politicos can come up with lately.

So Washington fulminates in fury at being outmaneuvered by a supposed foe – when in fact China, recently an American friend until idiotic sachems in the U.S. declared it otherwise, has long invested in Africa, occasionally quite generously handed its infrastructure over to local governments, and, contrary to western financial barbarism, forgiven loans when African countries couldn’t pay! The U.S. government long knew about the nature of these Chinese investments, but lately goes out of its way to distort and lie about them.

Trump’s secretary of state, Mike Pompeo fibbed about a port in Sri Lanka, which those supposedly devious Chinese had, he lied, repossessed as part of their “debt trap” for Africa. (This repossession never happened.) Even comedian Trevor Noah flogged this bogus story, demanding to know what is going to be done about how those Asiatics ensnare poor nations to steal their infrastructure. And the most recent propaganda has been some nonsense about an airport in Uganda, supposedly stolen by China. (It wasn’t.)

The description of the CIA’s viperous attitude toward Lumumba, made by journalist Cameron Duodu and recounted in Williams’ book, unfortunately, still holds for today: “His country has got resources. We want them. He might not give them to us. So let us go get him.” In addition, Washington bigwigs regard the entire African continent as a stage for their Great Game competition with China, which is disastrous. Africans of all nationalities will only suffer as a result.

So a history like White Malice could not arrive at a more opportune time. It shows how Ghanian President Kwame Nkrumah – ousted by a CIA plot in 1966 – dreamed of a united states of Africa. While Washington ensured that never emerged, African countries can still coordinate and work toward shared goals. Williams’ account spells out the cost of not doing so.

This book showcases three main villains – CIA director Allan Dulles, diplomat and arts patron William Burden (a one-time director of New York City’s Museum of Modern Art, which boosted the abstract expressionism the CIA so vigorously funded and promoted) and the crudely murderous Leopoldville CIA station chief, Larry Devlin. But behind these three monsters loomed a vast, homicidal military empire, piloted by capitalist ideologues, who did not value human life, to put it mildly, especially if that life belonged to black, brown or communist people.

In that sense, little has changed from the 1950s and ‘60s to the present. Which should be cause for alarm. It probably is, to the Chinese, and to the Ethiopians, who find their prosperous country in imperial crosshairs, much as another once wealthy African nation, Libya recently did. But otherwise, most of the world sleeps through this repeat performance of the African tragedy.

It shouldn’t. The CIA committed atrocious crimes in the ‘50s and ‘60s, and not just on the African continent. Williams cites the suspiciously premature deaths of left-leaning African notables, as well as that, in Paris, of the great African American writer, Richard Wright. And one of the most despicable of the CIA’s many murders was that of Congo’s first elected leader. “Lumumba, Malcom X believed, was the ‘greatest black man who ever walked the African continent,’” Williams writes. Malcom X was not alone in this judgment. Which is why, as Williams notes, when CIA hands got together to boast of their dirty exploits, the CIA’s man in Congo, Devlin, so pivotal in schemes to trap and murder Lumumba, always carefully kept his mouth shut.

Eve Ottenberg has published 23 novels and two collections of short stories. Her latest books are  Bonkers and Anxiety, and Other Stories under the Three Bluebirds Press imprint. Her other recent novels are Troglodyte, Birdbrain, Wages, Further Adventures of Feckless Frank, Carbon, Sanctuary City followed Hometown U.S.A. and Tainted Water, all also published under the Three Bluebirds Press imprint, while Homegrown was published in 2017 by AuthorHouse. The novel Sunset at Dawn, fourth and final in The Human Struggle series after The Race of Men, Zone of Illusion and Realm of Shadow, was published, along with the rest of the series, by AmericaStarBooks. Sojourn at Dusk was published by the Plain View Press, while the novels Dark Is the Night, The Walkout: A Tale in Three Parts, Suburbia and Reluctant Reaper were published in 2011 and 2012 by PublishAmerica. Previously, her novel, Dead in Iraq, was published in 2008 by the Plain View Press. Her collection, What They Didn't Know, Stories and Essays, was published by PublishAmerica eight years ago. Glum and Mighty Pagans, The Widow's Opera and The Unblemished Darlings were all published by AuthorHouse some years back. She has also written another novel, as yet unpublished. She had a short story, "What Came Back," published in Garbanzo Literary Journal, and previously had a short story, "The Bibliophile" published in The Rockhurst Review, "The Cat Society" in The Cutthroat Review, "The Rescue" in Wild Violet, and "The Newborn" in Languageandculture.net. Her essay on Don Quixote was published in the journal of the Sacred Fools Press. She gave a reading from Glum and Mighty Pagans at the invitation of PEN. Her fiction was previously represented by the literary agent, Candida Donadio, who has since, unfortunately, passed away. She has written a weekly column, “Hard Times” for The Village Voice, about the politics of housing in Manhattan. She also covered the criminal courts for the Voice. Her book reviews have appeared in The New York Times, Vanity Fair, The Baltimore Sun, The Philadelphia Inquirer, USA Today, The Cleveland Plain Dealer, The Nation, The New Yorker’s “Briefly Noted” section, The Washington Post, The Washington City Paper, In These Times and many other venues. She has published articles in The New York Times Magazine, Vogue, Elle, Working Mother, Truthout, labornotes, CounterPunch and other magazines and newspapers and has worked as an editor at several publications. She has a bachelor’s and a master’s degree from the University of Chicago and another master's from the University of Maryland. She is married, has three children and resides in Maryland. Follow her on twitter, @OttenbergEve

Subscribe to CP+ and get exclusive articles you won’t find anywhere else! Your subscription is another way for you to support CounterPunch as a truly reader sustained website. We have 2 plans – Monthly or Yearly – with options available for all levels of support. Select the options that suit your needs.