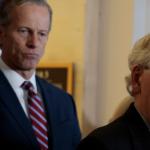 U.S. Senate Minority Leader Mitch McConnell on Tuesday laid bare his reasoning for vehemently defending the use of the legislative filibuster, which the Republican Party has used in the past several months to block two major pieces of voting rights legislation—both of which would have kept the GOP from continuing its voter suppression push across the country.

Schumer promised to "advance systemic democracy reforms" to end Republicans' attempts to "delegitimize our election process," which McConnell claimed was a sign of "genuine radicalism."

"It appears that the majority leader is hell-bent on trying to break the Senate, and the argument is that somehow state legislatures are busily at work trying to make it more difficult for people to vote," McConnell said, suggesting that legislatures in 19 states have not passed at least 34 restrictive voting laws in the past year, as the Brennan Center for Justice has reported at length.

The John Lewis Voting Rights Advancement Act and the Freedom to Vote Act—the two bills Republicans blocked late last year using the filibuster, which effectively requires 60 votes instead of a simple majority—would restore part of the Voting Rights Act that was gutted in 2013, which prevented discriminatory voting restrictions; end partisan gerrymandering; make Election Day a national holiday; and take other steps to ensure Americans can vote.

McConnell accused the Democrats of "radicalism," Rep. Jim McGovern (D-Mass.) pointed out, days before the one-year anniversary of the January 6 insurrection in which supporters of former President Donald Trump violently attempted to overturn the 2020 election results.

McConnell outlined pro-democracy proposals that the Democrats have put forward as evidence of the party's so-called "genuine radicalism."

As court reform advocates have pointed out, despite McConnell's claims of radicalism, the number of justices on the Supreme Court has changed numerous times.

Sean Eldridge, founder and president of pro-democracy group Stand Up America, noted that when the GOP controlled the Senate, McConnell reformed the filibuster to confirm three Supreme Court justices nominated by Trump.

"If 51 votes is good enough for a lifetime confirmation to the highest court in our land, it should be enough to protect our freedom to vote," Eldridge tweeted.

Ahead of a possible vote on changing the Senate rules by the 17th, Democrats have been meeting with conservative Sen. Joe Manchin (D-W.Va.)—who, like Sen. Kyrsten Sinema (D-Ariz.), supports the filibuster—to discuss his position on possibly amending the legislative tool.

Manchin said after a meeting with colleagues Tuesday afternoon that he is "open to modest changes," according to Politico reporter Burgess Everett.