Thanks to US Sanctions, Afghans Are Starving 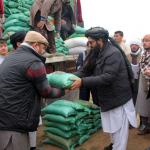 The US withdrawal from Afghanistan last summer provoked a wave of sudden concern across the American media about the plight of the Afghan people. That concern, as it turned out, was both fierce and fleeting, with some network pundits in particular going rather quiet once debate about the Biden administration’s disengagement had worn out its news cycle.

As writer and media critic Adam Johnson observed in an analysis published last month, several high-profile media figures dedicated substantial time and numerous segments to the coming suffering of Afghans in the act of scolding critics of the American occupation and those advocating withdrawal alike. And as FAIR’s Julie Hollar noted, the plight of Afghan women in particular briefly became a theme in US media attention again — having been mostly dormant since the months following the initial US invasion in 2001.

Remarkably, or perhaps unremarkably, the same networks and pundits have had much less to say about the cataclysmic conditions that now exist for millions throughout the country. And, when the subject does come up, the direct role of American policy is effectively erased from the picture. As Johnson put it in December: “An urgent, profound humanitarian crisis is unfolding as we speak, but the ramp of media concern is virtually nonexistent. A report here and there over the past weeks, but nothing remotely close to the nonstop moralizing and calls to ‘do something’ we saw during the last few weeks of August upon the U.S. withdrawal.”

Even since last month, the situation has deteriorated. According to recent reporting from the Washington Post, nearly 23 million Afghans (out of a total population of 39 million) don’t have enough to eat, while many lack proper shelter and the means to heat their houses. It’s a datapoint you’re unlikely to see take over the news cycle and, in the event that it does appear, existing precedent suggests you’re even less likely to hear about the direct role of US policy in bringing it about. But behind opaque euphemisms like “a man-made crisis” and “dried-up foreign aid” is the unavoidable truth that US-led sanctions coupled with the Biden administration’s decision to freeze the majority of the Afghan government’s assets have quite literally crippled the country’s economy.

As a result, the United Nations has warned, its banking system is on the brink of collapse and as many as a million children are now at risk of dying from malnutrition. A group of more than forty House Democrats last month urged the administration to unfreeze Afghanistan’s central bank reserves, noting in an open letter the economic ruin that America’s confiscation of the country’s financial assets has caused and adding: “No increase in food and medical aid can compensate for the macroeconomic harm of soaring prices of basic commodities, a banking collapse, a balance-of-payments crisis, a freeze on civil servants’ salaries, and other severe consequences that are rippling throughout Afghan society, harming the most vulnerable.”

With political pressure mounting, it’s at least conceivable that the Biden administration will have to abandon the talking point that it’s somehow aiding the Afghan people by punishing a repressive government. As facts on the ground make all too clear, the greatest victims of Washington’s post-occupation policy have not been the Taliban but ordinary Afghans themselves.

Luke Savage is a staff writer at Jacobin.