Progressives to Clinton and Other Corporate Democrats: 'Back Off' on Election Advice 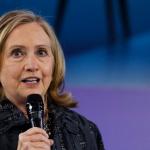 Progressives on Wednesday dismissed arguments from corporate Democrats that the party should avoid "going too far left"—despite mounting evidence that voters are in desperate need of—and demanding—bold, far-reaching policies and social programs.

Clinton advised the party to engage in "careful thinking about what wins elections," suggesting that progressives who push for policies such as Medicare for All, transformative police reform, and student loan cancellation only have chances of winning "in deep-blue districts."

Clinton's December comments came ahead of the 2022 midterm elections, in which Democrats face the potential losses of their razor-thin majorities in the U.S. Senate and House.

Debate between progressive and so-called centrist Democrats "means nothing if we don't have a Congress that will get things done and we don't have a White House that we can count on to be sane and sober and stable and productive," added Clinton in her interview.

Matt Bennett, co-founder of centrist think tank Third Way, added that Democrats must approach the coming midterms "the way Joe Biden was in 2020—mainstream, pragmatic, and focused on issues that resonate."

But despite Clinton and Bennett's confidence in that strategy, President Joe Biden worked closely with progressives to make his platform more appealing to younger voters, gain the backing of groups like the Sunrise Movement, and convince left-wing lawmakers and groups to campaign aggressively for him.

Since entering the White House, Indivisible co-founder Leah Greenberg pointed out, Biden has also worked with Senate Budget Committee Chairman Bernie Sanders (I-Vt.) and the Congressional Progressive Caucus to mold and his Build Back Better agenda, the $1.75 trillion investment in climate social spending whose passage is currently stalled by right-wing Democrats including Sens. Joe Manchin (D-W.Va.) and Kyrsten Sinema (D-Ariz.).

"When conservative Democrats have repeatedly ripped apart the president's agenda while progressives fight to save it, it's frankly bizarre to watch the media conversation focus on the risks of 'going too far left,'" Greenberg told The Hill.

Clinton's comments echoed the outrage expressed by Rep. Abigail Spanberger (D-Va.) after the 2020 election, which she won by just 1.8%.

Despite the comfortable victories of outspoken progressives like Reps. Ilhan Omar (D-Minn.) and Cori Bush (D-Mo.) that same year, the right-leaning Spanberger was quick to blame the left's push for police reform and government-run healthcare for her own near-loss.

"Winning elections is not about looking good. It's about being good," Bush (D-Mo.) told The Hill in response to Clinton's warning. "If Democrats brought home expansive climate action, a federal minimum wage of at least $15, paid leave, police reform, and 'Medicare for All,' we would win in a landslide."

Sema Hernandez, a progressive who ran for U.S. Senate in Texas in 2020, sarcastically expressed admiration for Clinton's and other corporate Democrats for their "commitment to losing by silencing voices of disenfranchised and marginalized people."

As Bush suggested, many of the policies derided by conservative Democrats as "too far left"—including Medicare for All, student debt cancellation, and free public college—are broadly popular.

"The problem is that these are not getting done, year after year, even while basic necessities like housing and healthcare keep getting more and more expensive," Bush told The Hill.

Clinton's remarks also come as the coronavirus pandemic has proven the need for far-reaching, decisive action by the federal government on behalf of working people.

Last month, the White House was forced to reconsider its stated belief that providing rapid Covid-19 tests to all Americans would be too expensive and logistically impossible. After White House Press Secretary Jen Psaki mocked a reporter's suggestion that the U.S. follow the lead of other wealthy countries and ensure tests are available to all, the administration responded to pressure by unveiling a plan to send 500 million tests to Americans.

Biden has also been pressured to extend the student loan payment moratorium that was put in place in March 2020 and state his support for making an exception to the Senate filibuster in order to pass voting rights legislation.

Political commentator Kyle Kulinski argued that it is so-called centrists, not lawmakers on the left, who should "back off."

While centrists claim to be pragmatic, Greenberg told The Hill, conservative Democrats including Manchin have spent the past several months "torpedoing proposals that enjoy the support of huge majorities of Americans."

"Calls to avoid going 'too far left' only distract from the real problem we face: the risk of failing to deliver on the promises we've made to voters," she added.