Why is So Little Known About the 1930s Coup Attempt Against FDR? 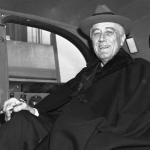 Donald Trump’s elaborate plot to overthrow the democratically elected president was neither impulsive nor uncoordinated, but straight out of the playbook of another American coup attempt – the 1933 “Wall Street putsch” against newly elected Franklin Delano Roosevelt.

America had hit rock bottom, beginning with the stock market crash three years earlier. Unemployment was at 16 million and rising. Farm foreclosures exceeded half a million. More than five thousand banks had failed, and hundreds of thousands of families had lost their homes. Financial capitalists had bilked millions of customers and rigged the market. There were no government safety nets – no unemployment insurance, minimum wage, social security or Medicare.

On 4 March 1933, more than 100,000 people had gathered on the east side of the US Capitol for Roosevelt’s inauguration. The atmosphere was slate gray and ominous, the sky suggesting a calm before the storm. That morning, rioting was expected in cities throughout the nation, prompting predictions of a violent revolution. Army machine guns and sharpshooters were placed at strategic locations along the route. Not since the civil war had Washington been so fortified, with armed police guarding federal buildings.

FDR thought government in a civilized society had an obligation to abolish poverty, reduce unemployment, and redistribute wealth. Roosevelt’s bold New Deal experiments inflamed the upper class, provoking a backlash from the nation’s most powerful bankers, industrialists and Wall Street brokers, who thought the policy was not only radical but revolutionary. Worried about losing their personal fortunes to runaway government spending, this fertile field of loathing led to the “traitor to his class” epithet for FDR. “What that fellow Roosevelt needs is a 38-caliber revolver right at the back of his head,” a respectable citizen said at a Washington dinner party.

In a climate of conspiracies and intrigues, and against the backdrop of charismatic dictators in the world such as Hitler and Mussolini, the sparks of anti-Rooseveltism ignited into full-fledged hatred. Many American intellectuals and business leaders saw nazism and fascism as viable models for the US. The rise of Hitler and the explosion of the Nazi revolution, which frightened many European nations, struck a chord with prominent American elites and antisemites such as Charles Lindbergh and Henry Ford. Hitler’s elite Brownshirts – a mass body of party storm troopers separate from the 100,000-man German army – was a stark symbol to the powerless American masses. Mussolini’s Blackshirts – the military arm of his organization made up of 200,000 soldiers – were a potent image of strength to a nation that felt emasculated.

A divided country and FDR’s emboldened powerful enemies made the plot to overthrow him seem plausible. With restless uncertainty, volatile protests and ominous threats, America’s right wing was inspired to form its own paramilitary organizations. Militias sprung up throughout the land, their self-described “patriots” chanting: “This is despotism! This is tyranny!”

Today’s Proud Boys and Oath Keepers have nothing on their extremist forbears. In 1933, a diehard core of conservative veterans formed the Khaki Shirts in Philadelphia and recruited pro-Mussolini immigrants. The Silver Shirts was an apocalyptic Christian militia patterned on the notoriously racist Texas Rangers that operated in 46 states and stockpiled weapons.

The Gray Shirts of New York organized to remove “Communist college professors” from the nation’s education system, and the Tennessee-based White Shirts wore a Crusader cross and agitated for the takeover of Washington. JP Morgan Jr, one of the nation’s richest men, had secured a $100m loan to Mussolini’s government. He defiantly refused to pay income tax and implored his peers to join him in undermining FDR.

So, when retired US Marine Corps Maj Gen Smedley Darlington Butler claimed he was recruited by a group of Wall Street financiers to lead a fascist coup against FDR and the US government in the summer of 1933, Washington took him seriously. Butler, a Quaker, and first world war hero dubbed the Maverick Marine, was a soldier’s soldier who was idolized by veterans – which represented a huge and powerful voting bloc in America. Famous for his daring exploits in China and Central America, Butler’s reputation was impeccable. He got rousing ovations when he claimed that during his 33 years in the marines: “I spent most of my time being a high-class muscle man for big business, for Wall Street and for bankers. In short, I was a racketeer for capitalism.”

Butler later testified before Congress that a bond-broker and American Legion member named Gerald MacGuire approached him with the plan. MacGuire told him the coup was backed by a group called the American Liberty League, a group of business leaders which formed in response to FDR’s victory, and whose mission it was to teach government “the necessity of respect for the rights of persons and property”. Members included JP Morgan, Jr, Irénée du Pont, Robert Sterling Clark of the Singer sewing machine fortune, and the chief executives of General Motors, Birds Eye and General Foods.

The putsch called for him to lead a massive army of veterans – funded by $30m from Wall Street titans and with weapons supplied by Remington Arms – to march on Washington, oust Roosevelt and the entire line of succession, and establish a fascist dictatorship backed by a private army of 500,000 former soldiers.

As MacGuire laid it out to Butler, the coup was instigated after FDR eliminated the gold standard in April 1933, which threatened the country’s wealthiest men who thought if American currency wasn’t backed by gold, rising inflation would diminish their fortunes. He claimed the coup was sponsored by a group who controlled $40bn in assets – about $800bn today – and who had $300m available to support the coup and pay the veterans. The plotters had men, guns and money – the three elements that make for successful wars and revolutions. Butler referred to them as “the royal family of financiers” that had controlled the American Legion since its formation in 1919. He felt the Legion was a militaristic political force, notorious for its antisemitism and reactionary policies against labor unions and civil rights, that manipulated veterans.

The planned coup was thwarted when Butler reported it to J Edgar Hoover at the FBI, who reported it to FDR. How seriously the “Wall Street putsch” endangered the Roosevelt presidency remains unknown, with the national press at the time mocking it as a “gigantic hoax” and historians like Arthur M Schlesinger Jr surmising “the gap between contemplation and execution was considerable” and that democracy was not in real danger. Still, there is much evidence that the nation’s wealthiest men – Republicans and Democrats alike – were so threatened by FDR’s policies that they conspired with antigovernment paramilitarism to stage a coup.

The final report by the congressional committee tasked with investigating the allegations, delivered in February 1935, concluded: “[The committee] received evidence showing that certain persons had made an attempt to establish a fascist organization in this country”, adding “There is no question that these attempts were discussed, were planned, and might have been placed in execution when and if the financial backers deemed it expedient.”

As Congressman John McCormack who headed the congressional investigation put it: “If General Butler had not been the patriot he was, and if they had been able to maintain secrecy, the plot certainly might very well have succeeded … When times are desperate and people are frustrated, anything could happen.”

There is still much that is not known about the coup attempt. Butler demanded to know why the names of the country’s richest men were removed from the final version of the committee’s report. “Like most committees, it has slaughtered the little and allowed the big to escape,” Butler said in a Philadelphia radio interview in 1935. “The big shots weren’t even called to testify. They were all mentioned in the testimony. Why was all mention of these names suppressed from this testimony?”

While details of the conspiracy are still matters of historical debate, journalists and historians, including the BBC’s Mike Thomson and John Buchanan of the US, later concluded that FDR struck a deal with the plotters, allowing them to avoid treason charges – and possible execution – if Wall Street backed off its opposition to the New Deal. The presidential biographer Sidney Blumenthal recently said that Roosevelt should have pushed it all through, then reneged on his agreement and prosecuted them.

What might all of this portend for Americans today, as President Biden follows in FDR’s New Deal footsteps while democratic socialist Bernie Sanders also rises in popularity and influence? In 1933, rather than inflame a quavering nation, FDR calmly urged Americans to unite to overcome fear, banish apathy and restore their confidence in the country’s future. Now, 90 years later, a year on from Trump’s own coup attempt, Biden’s tone was more alarming, sounding a clarion call for Americans to save democracy itself, to make sure such an attack “never, never happens again”.

If the plotters had been held accountable in the 1930s, the forces behind the 6 January coup attempt might never have flourished into the next century.

[Sally Denton is the author of The Plots Against the President: FDR, a Nation in Crisis, and the Rise of the American Right. Her forthcoming book is The Colony: Faith and Blood in a Promised Land.]