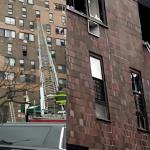 On Sunday morning, at Twin Parks North West, a subsidized low-income housing complex in the Bronx, a fire broke loose on the 19-story apartment building’s third floor after an electric space heater malfunctioned. The heater wouldn’t be needed if the building provided adequate heating in the first place.

Because the third-floor apartment’s door failed to shut—a violation of New York City law—the fire spread across the hall, and the building flooded with smoke. Automatic sprinklers could not douse the flames because there are none in the 19-story complex, except for in the laundry area and compactor room. In the 15th floor’s stairwell, another defective door stayed open, further engulfing the building in smoke.

Since exterior fire escapes are not a fixture in high-rise buildings, the residents of the 120-unit building had no other way out but to descend the smoke-filled interior stairwells. According to The New York Times, roughly 200 firefighters arrived on scene and saved victims from every level of the building even as their own oxygen tanks became depleted. As of Monday afternoon, 60-some people were injured in total, more than 30 suffered life-threatening complications, and 17 had died, including eight children.

Some low-income housing is traditional public housing. But most of it, since the 1970s, is subsidized by the government through a mix of tax breaks, rental subsidies, and Section 8 vouchers, with the buildings owned by for-profit companies. The less the owner invests in safety, the more profit the owner gets to keep. Despite the taxpayer subsidy, government oversight is dismal.

The result of 30 years without government intervention manifests in cities like New York, where subprime federal fire safety standards are hardly enforceable.

To put it another way, real estate and private equity investors, such as Camber Property Group, see Section 8 and other low-income housing arrangements as a “very safe investment,” as Gropper said in a 2020 interview with the Jersey City Times.

Under Section 8, landlords like Gropper, through their “innovation,” are guaranteed federal dollars from the Department of Housing and Urban Development, in addition to 30 percent of the tenant’s income. If a tenant’s income increases, the landlord’s 30 percent cut increases too. In the unfortunate scenario where a tenant loses their job and household income drops, HUD picks up the balance.

It’s a no-loss investment, whether a tenant can’t afford their bills or they’re better off than they were the month before; as long as someone lives in the apartment, according to Gropper, investors “make a reasonable risk-adjusted return.” Rep. Bonnie Watson Coleman (D-NJ) told the Prospect that when federal dollars are involved in housing, safety should be guaranteed, and accountability is a must from all parties receiving federal funds.

But instead of taking responsibility, Kelly Magee, a spokeswoman for Bronx Park Phase III Preservation LLC, said the third-floor door had been repaired by its maintenance team in July and no further work orders for the unit were reported.

Instead of addressing the defective door on the 15th floor, Magee added that the building’s fire alarm system worked, and blamed residents for triggering the smoke alarms in the past by smoking inside the building’s stairwells.

But according to residents of the building, it’s known that the building has a faulty alarm system. Karen Dejesus, an 18-year resident of the building, described the sounds of alarms to USA Today as “second nature.” Across several media outlets, residents said so many previous false alarms left them unfazed, until they saw smoke and heard cries for help.

The bill would create a grant program requiring public-housing authorities to collect data on older high-rise apartments, submit a report to the Department of Housing and Urban Development, and include recommendations for improved fire safety in public-housing units by installing automatic sprinkler systems.

While the legislation is narrowly focused on fire safety improvement through automatic sprinkler systems, Watson Coleman sees it as the first step toward a “national code” for public-housing units. A fully revamped national code, according to Watson Coleman, would go beyond automatic sprinklers, and include improved standards for fire-rated internal stairways, additional stairwells for means of egress, and fully integrated early fire detection standards.

According to the National Fire Protection Association (NFPA), the presence of an automated extermination system (i.e., automatic sprinklers) drops the rate of death and injuries in fires by 89 percent and 27 percent, respectively. In the properties tracked by the NFPA, only 36 deaths occurred in sprinklered buildings, compared to 2,816 deaths in buildings without an automated sprinkler system. It’s simple: As a first-order measure, automated sprinkler systems save lives.

Meanwhile, the last major improvement for fire safety standards in subsidized housing was under the Federal Fire Safety Act of 1992, which mandated automatic sprinkler systems in all future development of federally leased multifamily buildings.

But the result of 30 years without government intervention manifests in cities like New York, where subprime federal fire safety standards are hardly enforceable because 93 percent of the public-housing stock was built before 1992, exempting it from regulation under the Federal Fire Safety Act. (For example, the Twin Parks units were built in 1972.) This allows landlords like Gropper to elide any wrongdoing by saying their buildings were technically up to code.

It’s unclear whether that was even true. The Intercept reported on Tuesday that the Twin Parks units were cited twice last year for maintenance code violations involving inadequate fire retardant in the walls.

Existing federal standards for subsidized low-income housing matter less when old, deteriorated housing stock is demolished without replacement. According to the Center on Budget and Policy Priorities, the number of public-housing units since the mid-1990s dropped by more than 200,000. Today, only 958,000 public-housing units remain.

Both traditional public housing and voucher housing are failing their residents. Although public housing only accounts for 1.8 million low-income Americans, they live in extreme precarity. The average annual household income of a HUD beneficiary is $14,693, and a third of all HUD households are headed by single mothers. Nearly two-thirds of those living in public housing are Black or Latino.

In other words, federally funded housing in the U.S. is a death trap for the country’s destitute. Toward the end of our phone call, Rep. Watson Coleman told me, “Just because you rely on the government [for housing], your life is not less valuable.”

[Jarod Facundo is a writing fellow at The American Prospect.]