Defeating the Right: ‘The Blood-Dimmed Tide Is Loosed’ 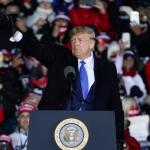 Last week Donald Trump told Pennsylvania Republican officials why he is placing such emphasis this year on local races for election supervisors across the country in 2022:

“We have to be a lot sharper the next time when it comes to counting the vote… Sometimes the vote counter is more important than the candidate. They have to get a lot tougher and smarter.”

Then in a weekend Arizona rally he was blunt about what needed to change in terms of race relations in this country:

Meanwhile Trump favorite Kelli Ward, chair of the Arizona GOP, calls for the arrest of election officials, labels the Biden administration an “illegitimate regime” and says:

Opponents of Trump and Trumpism have warned for months that January 6 was just a rehearsal for better planned election heists in 2022 and 2024. And if successful, the result would be a racist authoritarian regime imposing a Jim Crow 2.0 system and repressing all opposition.

Now we have the MAGA leadership itself not just admitting that scenario, but proudly boasting about it.

A TOXIC BREW HAS BOILED OVER

Numerous tightly argued articles have appeared in the last few months dissecting the outlook and plans of the Trumpist camp and their deep roots in U.S. history. Pieces such as “Trump’s Next Coup Has Already Begun,” by Barton Gellman, “American Fascism: It Has Happened Here,” by Sarah Churchwell, “From ‘Ku Kluxism’ to Trumpism” by Charles M. Blow, and numerous others have provided vital analysis and insight into what makes Trumpism tick.

But to capture the full intensity of this moment, to squarely face the depths of irrationality and hatred displayed at Trump rallies and pulsing throughout the MAGA bloc, it may be necessary to turn to poetry. Writing at a challenging moment a century ago—in the midst of the influenza pandemic and the aftermath of World War I—W.B. Yeats penned these often-quoted words in his poem “The Second Coming”:

“The blood-dimmed tide is loosed, and everywhere/The ceremony of innocence is drowned.”

There are reasons we face today’s dire political threat; they lie in the underlying structures of U.S. society as it has evolved since 1619. But the result is that a sizable portion of the population is, at least temporarily, beyond reason. A brew of white racial anxiety, Evangelical Christian nationalism, and toxic masculinity—stirred by right-wing billionaires, GOP political strategists, assorted demagogues, and money-hustling grifters —has boiled over.

BATTLES NOT FOUGHT ARE NEVER WON

That tide will not recede until it is beaten back. That means we’re in a big fight. And we don’t get to choose the battlefield. Trumpism’s plan to take power includes capturing public opinion (“winning the narrative”), dominating both the vote and the vote counting, and utilizing non-electoral action à la January 6 as needed. Our resistance must be across-the-board as well.

There are strategies on offer which can lead to victory. The “Block and Build” perspective (explained by Tarso Ramos here, and by Peter Olney and Rand Wilson here) argues that defeating Trumpism and increasing progressive clout are intertwined tasks that can and must be taken up simultaneously. We need to develop such strategies thoughtfully, build on the coordination and unity that we saw in 2020, and fight from the ground up. If we succeed, the result can be not just a victory over the MAGA bloc, but the beginning of a new political cycle that leads toward a genuine multi-racial democracy, a sustainable planet, and an economy that works for all.

Especially when facing a “blood-dimmed tide,” no strategy can succeed if it is not anchored by people who are committed to give the fight everything they’ve got. And beyond that, to do what it takes to raise the spirits and stiffen the spines of all those who are daunted by the enemy’s ruthlessness and seeming strength. Yeats did not see enough of such people when he added these lines to his poem:

“The best lack all conviction, while the worst/Are full of passionate intensity.”

Today the core of the MAGA bloc is certainly ginned up. But it is our responsibility to see that “the better angels” of our country—those who stand for democracy, justice, and peace—match and outdo them in conviction.

All tendencies to underestimate the danger at hand—whether out of denial, accepting the mythology of ‘it can’t happen here” or belief that Trumpist reaction will not be any worse than what we live with now—must be dispensed with. So too must those tendencies’ mirror images —belief that the deck is too stacked against us, or that cooperation (especially electoral cooperation) with anti-Trumpists who do not share our left politics is unacceptable, impossible, or worthless.

Politics holds no guarantees. But battles not fought are never won. The first step toward defeating the MAGA bloc in 2022 and 2024 is setting our sights on it. And then keeping our eyes on the prize until it is done.

[Max Elbaum has been active in peace, anti-racist and radical movements since the 1960s. He is an editor of Organizing Upgrade and the author of Revolution in the Air: Sixties Radicals Turn to Lenin, Mao and Che (Verso Books, Third Edition, 2018).]