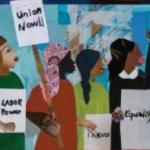 Ellen Bravo has spent more than five decades as an activist. The founder of the Milwaukee Chapter of 9 to 5 in 1982 (part of the National Association of Working Women), Bravo moved on in 2004 to direct Family Values @ Work. She has participated in numerous campaigns for gender equality and economic self-sufficiency. As recently as January 4, 2022, Bravo’s letter to the editor appeared in The New York Times weighing in on a story asking: “What Do You Think You Should Be Paid?” No surprise, Bravo argued that standards should be “clear, fair and transparent and applied equally to all.”  Now, with the publication of Standing Up: Tales of Struggle, she translates her experiences into fiction. This isn’t her first foray as a fiction and non-fiction author.  Her previous books include the fictional Again and Again (2015) and the non-fiction Taking on the Big Boys, or Why Feminism is Good for Families, Business and the Nation (2007), based on her grassroots organizing work. This time, she has partnered with her husband, Larry Miller, also an organizer with decades of experience.

The stories pay attention to jobs we normally don’t think about; the call centers; the people who make pipe; or process checks; the hospital laundries. What they entail close up, the daily indignities, and the dangers inherent in routinized sloppy procedures that are just part of the day’s work. One example — the contaminants employees are exposed to while working in the hospital laundry.  The hardships resulting from the lay-offs and shift work and the havoc they cause in a working person’s life. One character, questioning company policy, says: “Why do we have to wait five years to get sick?”

The stories describe the choices people have to make and their impact, a sick child, an abusive husband; the constant costs of having too little money; the sheer drudgery of doing these jobs and the utter lack of any control over their working lives; the small indignities and the larger practices that play havoc with those lives.

The main theme that runs like a thread throughout the stories is organizing. In the acknowledgments, Bravo describes a conversation with her father, as he dismissed her plan to become an organizer. Countering his litany of drawbacks, she presciently told him: “You’re forgetting the joy.” The stories describe what happens when the people who Imbolo Mbue calls “the deliberately unheard” (as opposed to “the voiceless”) stand up for themselves and others.

The book captures the process in different settings, when people consciously act to fathom and then dismantle the obstacles they encounter, piece by piece. The process of convincing one’s self and the challenge of then convincing others to take a risk and speak up, act up. What it’s like to challenge one’s immediate environment through taking collective action and the changes – the personal epiphanies – that can result. The small victories and then passing it on, finding the next cause, once empowered by the contagious spirit of organizing.

A few of the stories stand out for their fine-grained examination of this process. Two favorites are “We Won’t Let You Pollute Our Playground,” about an inspired bit of community environmental organizing and “Feminists and Firefighters” about the work of advocates during a training session on sexual harassment. This story is pitch-perfect and worth quoting for some of its insights.  “She thought of those women whose stories filled her head at night when she couldn’t sleep. What those women wanted was so simple it hurt. Believe us; don’t blame us.” Trying to distinguish between being a passive observer and speaking up, one character says: “It would make all the difference in the world. You know who they are but did nothing to stop them.”

Bravo and Miller’s hopes for the book are that it will nourish those already engaged in struggles and spur on new generations of activists. Combined, the stories are like a cookbook for activists with details of inspired campaigns borrowed from the records of two senior organizers who are happy to share.  Outside the focus traversed in the novel, there is another question organizers need to confront.  And that is, assembly line by assembly line, workplace by workplace organizing will only get us so far. It leaves untouched the larger forces that have eradicated the American Dream – the dreams of hard work and fairness; of justice and a life worth living. The power dynamics and political equation that have robbed the working-class of so much over the decades since 1970.

[[Jane LaTour is a former Executive Board member at the New York Labor History Association, Jane worked on factory assembly lines for seven years and took part in many campaigns in the workplace. Her first job in the labor movement was as a union organizer for District 65. She twice served as the director of the Women’s Project for the Association for Union Democracy (AUD). Her book, Sisters in the Brotherhoods: Women in New York City Organizing for Equality was published in 2008.]