‘Homelessness is Lethal’: US Deaths Among Those Without Housing Are Surging 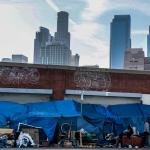 The number of Americans dying while homeless has surged dramatically in the past five years, an exclusive analysis by the Guardian in conjunction with an academic expert at the University of Washington has shown.

An examination of 20 US urban areas found the number of deaths among people living without housing shot up by 77% in the five years ending in 2020.

The rise from 2016 through 2020 was driven by many factors, including ever-rising numbers of people living on the street and the growing dangers they face, such as violence, untreated disease and increasingly deadly illicit drug supplies.

From 65-year-old Randy Ferris, killed when a car veered into a California sidewalk encampment, Justine Belovoskey, 60, who died alone in a tent during a Texas cold snap, and Anthony Denico Williams, stabbed to death at age 20 in Washington DC, to scores of young people succumbing to overdoses on the streets, their stories reflect the harrowing tragedy of an epidemic of homelessness.

“People who die while experiencing homelessness are some of the most neglected in society,” said Matt Fowle, University of Washington researcher and co-creator of the organization Homeless Deaths Count. “These are folks who most need our help and are least likely to receive it.”

Coronavirus was just one more hazard people struggling on the streets and in shelters faced in the last two years.

While the federal government makes no effort to count deaths nationally of people deemed homeless, the Guardian worked with Fowle to collect local data from large urban areas, where consistent year-to-year counts were available. The stark results stretch from Los Angeles and Seattle to New York, Philadelphia and Miami, via the heartland. 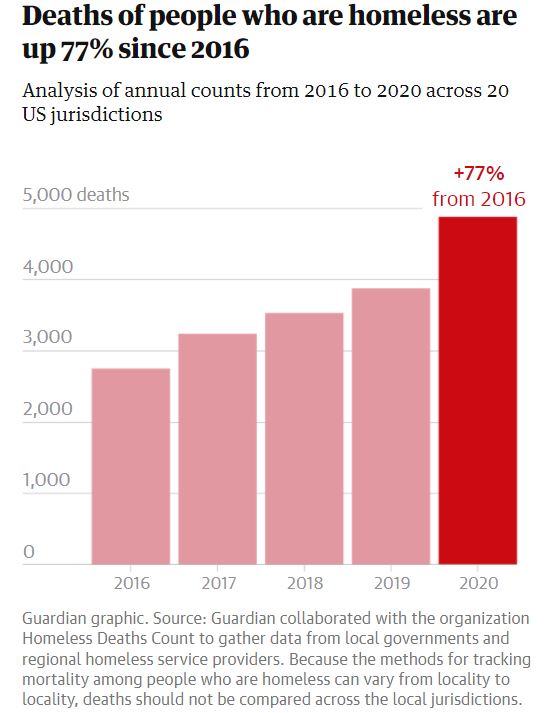 The Guardian’s analysis counted 18,000 people who died homeless over five years in encampments, on sidewalks or in shelters, including 5,000 deaths in 2020 alone. In most cases, the deaths were tracked by county coroners and medical examiners, but in a few locations only local non-profits kept track.

“Every person and every life matters,’’ said the council’s Katherine Cavanaugh. “That’s part of why we are encouraging people to just track these deaths. We want to make sure that we can use that information to improve situations for people in the future and not have these deaths be happening in vain.”

In all but two of the 20 cities or counties examined by the Guardian, numbers rose significantly over five years. For instance, the homeless death toll in Los Angeles almost doubled to more than 1,600 in 2020 from 871 in 2016, while New York’s total more than doubled to 685 from 290.

In places that listed causes of death, the most prevalent have plagued homeless populations for years: drug overdoses, violence, traffic deaths and premature lethality of treatable conditions like heart disease. Only New York and Los Angeles noted a large number of deaths caused by Covid-19.

The overall jump in deaths may reflect both increases in the sheer number of unhoused people but also, disproportionately, the growing dangers they face. 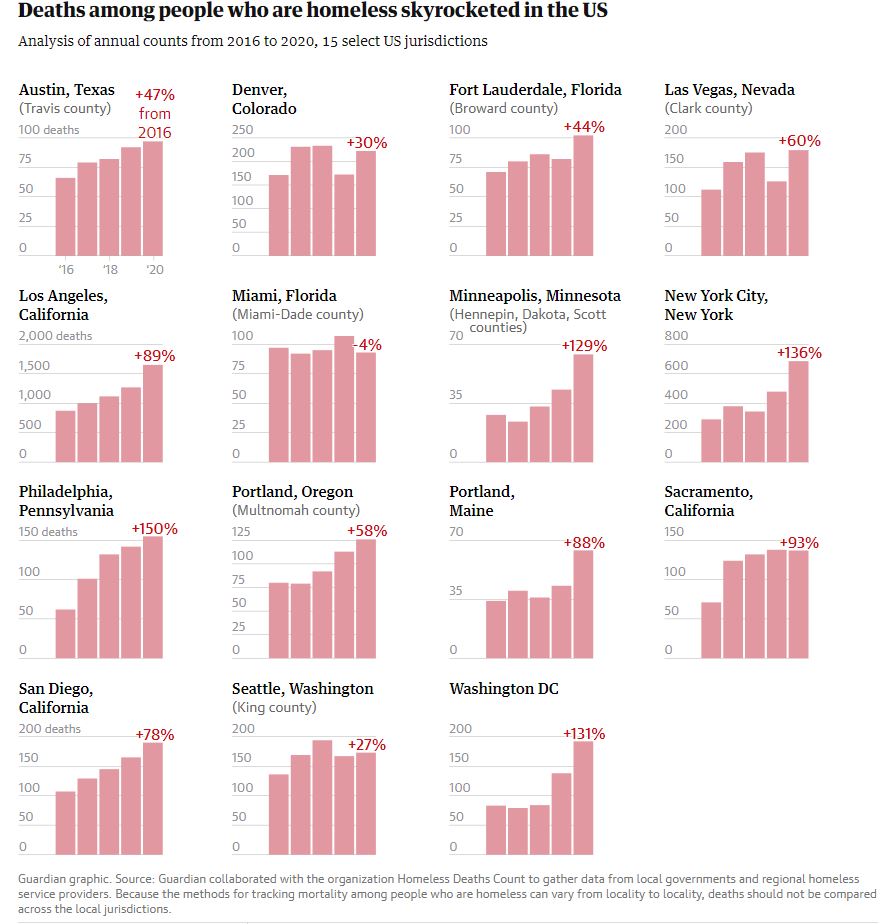 And more people who find themselves without a home are living outside, in unsheltered conditions, a factor that was exacerbated by shelter closures in the pandemic. They also suffer the toll of increasingly deadly synthetic street drugs, including fentanyl.

Many may have faced the kind of societal headwinds encountered by 26-year-old Christopher Madson-Yamasaki of Oregon, a bright, aspiring renewable energy technician with a mischievous grin, who had struggled with schizoaffective disorder since his teenage years, his family said.

He had become addicted to methamphetamines, after falling off his medication routine and self-medicating. He and his mother repeatedly sought to get him treatment around Portland. But in the end, there were no doors open for him.

He was found in a tent on 27 February 2020, dead of a meth overdose and with all his valuables stolen from him, days after being kicked out of a shelter for smoking on a balcony, according to his mother, Hope Yamasaki.

Yamasaki told the Guardian how Christopher fell through the cracks.

“And he didn’t make it to 27,” said his mother. “This is so hard to talk about, but it’s so important. So many members of our community are dehumanized for mental health and addiction issues. They matter.”

Officials of Multnomah county, which provides health services for Madson-Yamasaki’s region, held a press conference featuring his story to highlight the need for more specialized treatment, which they hope to provide with recently approved new funding.

“We know that there is a lot more to be done,” said the Multnomah county chair, Deborah Kafoury.

In 2020, drug overdose deaths were the top cause of death among homeless people in every urban area that reported causes.

“It’s deadlier to have a substance use disorder now,” said Liz Hersh, director of Philadelphia’s office of homeless services, who said fentanyl, which is as much as 100 times as potent as heroin, is a huge driver of increased overdose deaths.

Methamphetamine was also a factor in many deaths.

“We often hear anecdotally that people will start using meth as a way of staying alert to protect themselves and their belongings,” she said. “And then, the flip side of that is it can also lead to psychosis and erratic and violent behavior.”

Hersh of Philadelphia, where homeless deaths doubled over five years, also noted rising trends in overdoses and violence since coronavirus arrived, even though its homeless population decreased.

“We’re seeing some of the frustration and rage that the pandemic has engendered,” she said. “People are despairing.”

In Las Vegas on 13 July 2020, Brent Michael Lloyd, 48 and unhoused, was shot in the head while he slept outside, in what police described as a “thrill killing”.

Anthony Denico Williams, 20, lost his mother to cancer at age 16 and ended up regularly sleeping under the neoclassical arches of Washington DC’s Union station railway hub.

He dreamed of opening a home for youth in need. Asked what he would do with three wishes, he said he’d want “a house over my head, to be able to give back to others and to have a nice job, that’s it”.

Instead Williams was knifed to death 26 January 2020, in an altercation over a drug sale.

“So young, he still had his life ahead of him. And for it to end like this, I don’t know if there’s meaning in that.”

Homeless people are at greater risk of being hit by cars, according to numerous officials, particularly where large numbers are living under bridges or beside freeway off-ramps.

Randy Ferris, a Vietnam war veteran, was one of three men killed on 15 March 2021 when a driver veered into an encampment under a San Diego bridge.

Amber Joseph, who recently got housing, spoke at a memorial about how Ferris had helped her navigate living on the streets.

“He was like a big brother to me. He kept a close eye on me,” the Times of San Diego reported her saying.

Deaths from exposure make up a relatively small fraction of reported deaths, according to several homelessness experts, perhaps because the coldest cities have programs to get people indoors in winter.

But Bob Erlenbusch, executive director of the Sacramento regional coalition to end homelessness, said his normally temperate area of northern California, where 70% of the homeless population live outside, has seen more people dying of hypothermia in unusual weather events.

“I think it’s just so many more people outside exposed to the elements,” he said. “And the elements are somewhat more unpredictable than they might have been in the past. Sadly, really terrible storms and fires are the new normal.”

The climate crisis is driving more extreme weather events across the US.

During the exceptional cold snap that gripped Texas last winter, leaving millions without power, Justine Belovoskey, 60, perished of hypothermia in her tent in a state-sanctioned homeless encampment on 15 February. She didn’t make it to a warming center with a diesel generator, according to the Texas Observer.

Beyond the direct medical causes, factors such as widespread lack of affordable housing drive increases in homelessness and, ultimately, deaths, experts say.

Those jurisdictions that reported the genders of those who died typically found that about three-quarters were men. Racial trends were hard to establish, based on the few reports that included racial breakdowns.

Sacramento, California, for example, reported that 41% of those dying while homeless were people of color.

The average age of death for people without housing is low. Again in Sacramento county, for instance, it was 51 for men and 49 for women.

“Basically, on average, homelessness takes off 25% of a person’s life,” said Erlenbusch.

Preventable and treatable diseases, including heart disease and diabetes, are among the biggest causes of premature homeless deaths.

“People should be dying of these illnesses when they are 80, not when they’re 48,” said Margot Kushel, a professor of medicine at the University of California, San Francisco, and director of its center for vulnerable populations.

It may be some time before the true effects of Covid-19 on this population are known. The biggest surge in coronavirus deaths nationally didn’t come until January 2021, which isn’t yet included in most jurisdictions’ homelessness data.

New York City, which recently disclosed deaths among people experiencing homelessness for the fiscal year ending July 2020, found that there were 121 deaths from Covid-19, mostly among those living in city-funded shelters. That made Covid the second highest cause of the 613 recorded homeless deaths that year.

And the pandemic probably worsened overdose deaths across the board.

Experts agreed that the best prescription is to house people.

“You cannot have a healthy society with this many people living on the economic and social margins,” said UCSF’s Kushel. “Homelessness is lethal. We’re not going to be able to solve this without solving homelessness.”

For UW researcher Fowle, who is working on a doctoral thesis about the crisis of US homeless deaths, it comes down to whether our society can muster the empathy to act.

“It’s a tragedy that people are dying without housing,” he said. “We know the solutions. Housing saves lives and, for these people, is often a form of healthcare.”