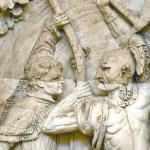 Speaking in support of a bill to remove all portraits of Confederates from public display at the United States Capitol last year, House Speaker Nancy Pelosi argued that the idea of artworks in the Capitol that honor “people who advocated cruelty and barbarism” is a “grotesque affront” to American ideals. The bill passed the House in June 2021, and although it has not yet come before the Senate, some states have voluntarily removed statues, including one of Robert E. Lee, honoring those who once fought for slavery from the Capitol’s National Statuary Hall.

The bill, like many of our recent debates over the fate of American public monuments, focuses on slavery. But even if it becomes law, visitors to the Capitol will still encounter several 19th century paintings and sculptures that advocate cruelty and barbarism—against Native Americans.

One of these sculptures, carved in 1826-1827 by the Italian artist Enrico Causici, is a gruesome scene showing the explorer Daniel Boone stabbing a Native American warrior. Another warrior lies dead beneath their feet, filling the entire bottom of the rectangular panel. Soon after the work was installed, then-Rep. Tristam Burges, sarcastically commented that it “very truly represented our dealing with the Indians, for we had not left them even a place to die upon.”

The Boone panel is one of the first four sculptures made for the Capitol after it was rebuilt following its burning by the British in the War of 1812. The other sculptures show a Native American man offering corn to Pilgrims landing at Plymouth Rock, Pocahontas saving John Smith, and William Penn shaking hands with a Native American to close a deal to exchange land for gifts. In 1842, then-Rep. Henry Wise claimed that Native Americans visiting the Capitol had observed how well these sculptures showed the history of relations between them and settlers: “We give you corn, you cheat us of our lands; we save your life, you take ours.”

These sculptures went up during the debates leading up to President Andrew Jackson’s 1830 “Indian Removal Act,” which expelled Native Americans from their lands east of the Mississippi River. The Congressmen who authorized forced marches in which thousands died, including the infamous “Trail of Tears,” thought their actions were justified because they believed either that Native Americans were so savage that they could never peacefully coexist with white Americans or that the inferior “Indian race” would quickly die out when faced with superior European settlers.

It’s no wonder the Congressmen believed these stereotypes, since they saw them in the sculptures decorating the Capitol. The Boone panel shows both at once: its warrior is wild-eyed, with a face twisted in a demonic grimace of hatred. But Boone’s face remains calm. Despite his opponent’s impressive muscles and the tomahawk raised over his head, Boone is confident that his superior nature will win the fight.

While serving in the House in 2019, now-Secretary of the Interior Deb Haaland, an enrolled member of the Laguna Pueblo tribe, called for a review of the Capitol’s artwork to document its “racist stereotypes about Native Americans.” The Architect of the Capitol, the agency responsible for the Capitol’s art, put up a website listing some of the images of Native Americans in the building, but there have so far been no indications that any of these artworks will be removed. The project would indeed be complex, since Native American figures appear so often in the Capitol’s mid-19th century decorations, ranging from sculpted panels on the Rotunda’s doors, its paintings, including John Chapman’s 1840 “Baptism of Pocahontas,” the massive sculptures over the entrance to the Senate building, and even the clock keeping time in the House. In her book Art and Empire, scholar Vivien Green Fryd points out that these Native Americans, “relegated to shadows and borders,” are nearly always shown in powerless positions. They crouch, kneel, collapse, or sit in despairing contemplation of their children, symbolizing the imminent extinction of their kind.

The frieze shows the 1813 death of the Shawnee chief Tecumseh, who formed intertribal coalitions to fight the settlers. Tecumseh is shown crumpled to the ground below Richard Mentor Johnson / Architect of the Capitol

Attorney Brett Chapman, a member of the Pawnee tribe and descendent of Chief Standing Bear, pointed me to a section of the painted frieze circling the Rotunda. The frieze shows the 1813 death of the Shawnee chief Tecumseh, who formed intertribal coalitions to fight the settlers. Tecumseh is shown crumpled to the ground below his killer, Richard Mentor Johnson (who would later serve as vice president under Martin Van Buren), who rides a triumphantly rearing horse. Chapman asked me to imagine if the frieze instead showed “Martin Luther King with a gunshot wound to his head, with the murderer standing right over him.” For Chapman, celebrating the death of King or Tecumseh is “the same thing”: a glorification of the oppression of Americans of color.

Chapman said he notices so many images of dying Native Americans in public art that they no longer sadden him. He finds the banal commonplaceness of these images much more horrifying than their content. But considered in another way, there aren’t really any Native Americans in the Capitol’s historical artworks at all. That’s because the artists assembled a mishmash of generic “Indian” accessories, throwing together tomahawks, feathers and furs, without regard to the customary appearance of any particular tribe.

Even though the Capitol artists didn’t care about Native American culture, they were often very interested in Native American bodies. When researching for my book about American monuments, I found letters written by several of these artists about how to obtain Native American skulls. They believed the skulls of different races were shaped differently—and that they needed to get these differences right if they wanted their artworks to show why a seemingly powerful Native American warrior would crumple to the ground before a white opponent.

Read more:What Should Take the Place of Confederate Monuments That Have Come Down?

That’s what Horatio Greenough showed in his massive 1850 sculpture “Rescue,” installed outside the Capitol Building’s eastern entrance. Greenough used plaster casts of skulls lent to him by the artist John Chapman, who had obtained them for his Rotunda painting of the baptism of Pocahontas. Greenough’s sculpture, which shows a settler triumphing over a dying Native American warrior, was praised by critics for, as one of them put it in 1851, showing “the ferocious and destructive instinct of the savage, and his easy subjugation under the superior manhood of the new colonist.” Another complimented the way the settler’s “rebuking force is a shade saddened and softened by the melancholy thought of the necessary extinction of the poor savage, whose nature is irreconcilable with society.”

But you won’t see “Rescue” on a Capitol tour today. In 1939, a joint resolution of Congress called for the sculpture to be “ground into dust” and “scattered to the four winds” so that it would not be a “constant reminder to our American Indian citizens” about the cruel process of Western expansion. In 1941, a similar joint resolution called “Rescue” “an atrocious distortion of the facts of American history and a gratuitous insult” to Native Americans. While neither these resolutions nor protests by Indigenous groups had any official result, “Rescue” was put in storage in 1958, supposedly to protect it during construction work on the building. But it was never returned to the Capitol – and in 1976, a crane dropped “Rescue” as it was moving it to a new storage area. Its fragments linger in a government warehouse.

“Rescue” may have been one of the most bloodthirsty, and was certainly the largest single example, of a 19th century Capitol artwork based on the idea that Native Americans were fundamentally inferior to white Americans. But its disappearance is not enough. Professor Fryd, who wrote a book about how the derogatory messages about Native Americans of the Capitol’s historic artworks helped support harmful federal policy, says she thinks they should remain in place, “to convey the history of our nation rather than erasing it.” Chapman disagrees, arguing that these images belong in a museum where they can be properly explained.

Get your history fix in one place: sign up for the weekly TIME History newsletter

Some states in recent years have taken their own steps to honor Native Americans at the U.S. Capitol. In 2019, Nebraska placed a portrait statue of Chief Standing Bear in the Capitol Building’s National Statuary Hall. Standing Bear, of the Ponca tribe, successfully argued in an 1879 court case that Native Americans were “persons” under American law, and thus deserved basic human rights. Meanwhile, the state of Washington is on track to swap out one of its existing National Statuary Hall statues with a portrait of another campaigner for Indigenous rights, Billy Frank Jr., a Nisqually tribe member. These additions are important, but when I asked Mike Forcia, chairman of the American Indian Movement’s chapter in the Twin Cities, Minn., if he thought adding new images to the Capitol to honor Native Americans was enough to make up for the derogatory ones, he said no. “They should be taken down from their place of honor,” he said. “It’s time to come clean.”

When a Quinnipiac University poll asked Americans if they might support the removal of Confederate monuments in 2017, only 39% agreed. When a June 2020 poll asked the same question, 52% said yes. In the last few years, many of us have changed our minds about what parts of our history our public art should honor. But we must look beyond the Civil War. Maybe it’s time for a new “Indian Removal Act” – one that will remove stereotypes from the Capitol as a way of making space for equality.

Erin L. Thompson is a professor of art crime at the City University of New York. Her latest book, Smashing Statues: The Rise and Fall of America's Public Monuments, is now available from W. W. Norton & Company.