How BlackRock, Vanguard, and UBS Are Screwing the World 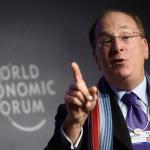 Who’s blocking progress on climate change? Fossil fuel companies and politicians in rich, high-emitting countries are the biggest obstructionists—the ones climate activists are rightly targeting with political campaigns, investigations, and direct actions. But as two recent reports have made clear, there’s another group climate watchers need to consider if the world is to avoid catastrophe: asset managers.

Asset management firms manage and invest the pooled funds of individual and institutional investors like billionaires, pension funds, and colleges. The world’s three largest asset managers (BlackRock, Vanguard, and UBS) alone control $21 trillion, roughly equivalent to the entire U.S. economy in 2017 and nearly twice as much as the entire world’s hedge fund, private equity, and venture capital industries combined. And asset management firms own a piece of virtually every industry: The “Big Three” of BlackRock, Vanguard, and State Street own more than 20 percent of shares in the average publicly traded S&P500 company and are also big players in private equity.

These companies have quietly taken up a central role in our economic and political life. The Big Three cast more than 25 percent of votes at corporate shareholder meetings, meaning they “exercise something akin to state authority over the largest corporations that account for the vast bulk of economic activity in … the world economy,” as investment strategy analyst Anusar Farooqui put it last year. It’s not just corporate governance, either: Major political decisions around the construction of crucial public infrastructure like the building of roads and hospitals have been structured in order to eliminate risk for asset managers and their clients as part of “public-private partnerships.” In 2020, professor and finance law expert William Birdthistle went as far as to call BlackRock a “fourth branch of government,” after the U.S. Federal Reserve again enlisted it to prop up the entire corporate bond market.

If climate justice is to succeed, it will involve taking on this new branch of government. A new report by Friends of Earth U.S. reveals that the Big Three asset managers collectively own more than 27 percent of shares in fossil fuel giants Chevron, ExxonMobil, and Conoco Phillips and over 30 percent of major agribusiness companies like Archer-Daniels-Midland, making them among the largest shareholders in the two industries most responsible for the majority of greenhouse gas emissions driving the climate crisis.

These faceless financial giants are not just funneling money into the companies causing the crises themselves; they’re also profiting off unjust responses to these crises. An earlier investigation by Jordi Calvo Rufanges finds that these mammoth asset managers are among the largest financiers of the global arms trade. The Friends of the Earth investigation adds that the asset managers are major investors in the companies that run private prisons and migrant detention centers and provide the drone and biometric technology that are revolutionizing the increasingly militarized border violence against displaced peoples around the world. All told, asset management companies own over $650 billion of shares in the top fossil fuel, agribusiness, border security, and surveillance companies surveyed by the Friends of the Earth report.

This adds up to a grim picture for climate justice. The business models propped up by these investments disproportionately impact low-income communities of color in the global north and global south—people who have contributed little to global cumulative emissions yet who are endangered by fossil fuel extraction’s sacrifice zones and industrial agriculture’s pollution, not to mention being disproportionately affected by flooding, rising food prices, and more. Their needs are routinely ignored: The same countries enthusiastically opening their doors for Ukrainian refugees spent the last decade enthusiastically closing them to refugees from Africa and the Middle East, while promoting the very high-tech, militarized borders and detention centers that asset managers are investing in.

No wonder climate change represents an “opportunity” for asset managers like BlackRock CEO Larry Fink. In 2021, Fink took the opportunity of BlackRock’s annual letter to CEOs—something of an unofficial State of the Union for the global nation of capital—to remind chief executives that “there is no company whose business model won’t be profoundly affected by the transition to a net-zero economy.” The largest asset managers hold major stakes in every industry and asset class on the planet and possess the size and reach to make sure that they profit off both the industries causing the problems and the violent, unequal “solutions” they fund.

Meanwhile, the world is decades late and a trillion dollars short on less dystopian responses to climate crisis: There are major gaps in available financing for a global shift to renewable energy that would prevent the worst impacts, as well as for adapting to the impacts that are already here. The new IPCC report is clear: “Half measures are no longer an option.”

Some might expect that asset managers would be a force for progress on climate crisis, since the diversity of asset managers’ investments makes them exposed to a wider range of risks than most investors are. Climate crisis destroying the world would eventually wreak havoc on portfolio returns, so shouldn’t the firms managing those portfolios have a direct financial interest moving climate policy forward?

On top of that, what’s good for portfolios, especially in the short term, isn’t necessarily good for people: The very same rising asset valuations that make housing a lucrative investment and an attractive part of a portfolio is also what entices corporate landlords to send rents skyrocketing nationwide, making housing unaffordable and unavailable for the vast majority of people across the planet. Moreover, the people who will be detained and confronted at militarized borders are likely not clients of BlackRock or Vanguard.

Unsurprisingly, asset managers have not used their considerable power to promote genuine climate sustainability or justice-promoting responses to the climate crisis. Instead, they have routinely voted against or abstained on shareholder resolutions that would support establishing serious climate targets or delinking supply chains from deforestation to climate targets. All the while, they have attempted to greenwash their continued investment patterns with “green investment funds,” the commanding majority of which are incompatible with global climate targets while fitting squarely into the goals of investors and financial capital. Tariq Fancy, former chief investment officer of Sustainable BlackRock, publicly called out the financial services industry for “duping the American public” and labeled sustainable investing as a “dangerous placebo that harms the public interest.”

Climate justice will require a serious course correction. We need comprehensive regulatory strategies to level the playing field between public institutions and unaccountable private capital and the asset manager behemoths managing their investments: including wealth taxes on corporate stock, as suggested by economists like Emmanuel Saez and Gabriel Zucman, alongside global tax reform.

But these can only mitigate the deeper problem for climate justice, which is that injustice has been and will likely continue to be profitable. Our continued reliance on the private sector for climate financing all but guarantees that profiteering off misery will continue. Only an energy democracy that takes crucial climate decisions out of the hands of private investors and into publicly accountable hands can tackle this core problem. That means building robust public systems of investment without “partnering” with private capital. Fortunately, scholars and activists have long discussed many existing options. Policymakers just need to implement them.

Whether by building new institutions like national investment authorities or finding ways to make our existing systems of spending more democratically responsive, a more transformative political shift to public investment is necessary. We should get started yesterday.

Olúfẹ́mi O. Táíwò is an assistant professor of philosophy at Georgetown University, and the author of Reconsidering Reparations and the forthcoming Elite Capture.