Is It OK To Mention NATO Expansionism When We Discuss the Russian Invasion of Ukraine? 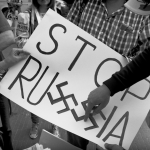 The real issue that has generated much heated discussion on the left is not over whether the Russian invasion is justifiable. Few, that is very few, say it is. Rather the key question is whether raising the issue of the North Atlantic Treaty Organization (NATO) distracts from the atrocity of the Russian invasion. Some on the left accuse those who raise the issue of NATO of justifying the invasion.

This is the basic claim of an article in New Politics by Taras Bilous titled “A Letter to the Western Left from Kyiv” that begins with the words “The ‘anti-imperialism of idiots’ meant people turned a blind eye to Russia’s actions". Bilous takes issue with Jacobin staff writer Branko Marcetic (as well as Tariq Ali) for articles that criticised NATO expansionism and, in doing so, were allegedly soft on Russia. In fact, Marcetic and Jacobin magazine have condemned the Russian invasion (and Putin himself) in no uncertain terms.

he argument for raising the issue of NATO expansion is somewhat weakened by the fact that there is a secondary motive that Russian President Vladimir Putin articulates, namely the claim that Ukraine forms part of Greater Russia — an argument that explicitly negates the principle defended by Vladimir Lenin of the right of self-determination and specifically the right of secession. Putin has defended the invasion on the basis of the threat posed by NATO expansion, but also on the basis of the historical justification of the notion of a Greater Russia.

Nevertheless, the major motive for the invasion is the fear of NATO expansion and what it implies with regard to Russia's legitimate security concerns. That is, NATO expansion represents an existential threat to Russia, an undeniable fact ignored by those on the left who oppose raising the issue of NATO at this moment.

Ukraine's membership in NATO would inevitably result in the installation of nuclear bases, a reality exacerbated by former United States President Donald Trump's withdrawal from the Intermediate-Range Nuclear Forces Treaty, in effect since 1987. It is no exaggeration to say that Russia’s very existence is threatened by missile installations in neighboring countries. In a matter of a few minutes, Russia could be blown off the face of the Earth.

Furthermore, membership in NATO means that the US considers an attack on that nation as an attack on US soil. Any border skirmish (such as the one that set off the Korean War) would necessarily involve the US militarily. In short, given this very real reality that Russian diplomacy has harped on ever since the first wave of NATO expansion in the 1990s under Yeltsin, the issue of NATO expansion cannot be placed on a par with Putin's romantic notions of a Greater Russia.

The anti-war movement needs to raise the issue of NATO expansion because the only way that the Ukrainian conflict can be resolved is through an agreement that places limits on NATO. Furthermore, the only long-term solution to the threat of war is the abolition of NATO, which ever since the fall of the Soviet Union has been transformed from a defensive pact to an offensive one.

Laying beneath the discussion is another debate of a broader scope and of greater significance in the long run, namely: Is Russia an imperialist nation? The word imperialist is getting thrown around a lot in the context of the Ukrainian conflict and, in effect, is being used as synonymous with expansionism.

First, the issue of imperialism has to be divorced from the issue of the lack of democracy in Russia. Imperialism cannot be equated with authoritarian rule. Empires from that of Rome to Great Britain in the nineteenth century to the US today have been considered democratic.

Second, if the Russian invasion of Ukraine is essentially about security concerns, as I have argued here, then the use of the term “Russian imperialism” is misleading.

Third, Russian interventionism at the world level is minuscule in comparison to US interventionism. “Russiagate” was kid's stuff at best in comparison to the US’s ongoing violation of national sovereignty on multiple fronts throughout the world. Furthermore, no country comes close to matching the US’s military presence throughout the world in the form of 750 military bases and 200,000 troops stationed on foreign soil, as well as the type of military pact that NATO represents and that Washington's Pivot to Asia strategy potentially represents.

The International Marxist Tendency points out that Russia prior to 1917 was an imperialist nation, even though it was economically backward and semi-feudal; likewise, Russia today is imperialist in spite of its economic backwardness. The problem with this argument is that it inadvertently lets US imperialism off the hook by (again inadvertently) lending itself to Washington's main talking point.

If Russian aggression is comparable to that of the US, then Cold War II, just like Cold War I, is a battle between democracy (ie the US, Western Europe and even Israel) against the authoritarian rule of Russia and China. No mention is made of the fact that the Russian invasion of Ukraine (as despicable as it is) was provoked (most likely intentionally so) by NATO. And no mention is made of the fact that US military and political aggression throughout the world is incomparable with that of any other nation.

Finally, the most important point of all. A century ago, Lenin demonstrated that imperialism is not a policy but an imperative. US imperialism is not the result of the aspirations of individual politicians, be it George W Bush, Trump or Joe Biden. It is part of the logic of the capitalist system at a given stage. In contrast, the invasion of Ukraine is largely the result of the decision of one individual, namely Putin. Russia as a semi-periphery nation (from an economic viewpoint), dependent on the export of raw materials, cannot be considered imperialist at this stage. This is not a mere academic question. From this proposition flows the pressing need to prioritise the struggle against US imperialism, an enemy that stands in the way of the achievement of nearly all other important goals.