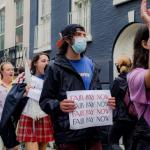 It seems that union organizing has become both necessary and cool. Can this surge be sustained—and what will it take?

Desperately exhausted, overworked, and underpaid workers—like Starbucks baristas, nurses, Amazon warehouse workers, and graduate students—are lining up for the fight of their lives (and for their lives). A certain collective excitement has lent an allure to standing up together, in a way that was last true 70 years ago.

Pulsing through workers nationally is a pull towards something new, edgy, and possibly powerful—built on the compelling truth that a risk becomes less risky when you are part of a group. Seeing hundreds of people take action—people who are “just like you”—takes it from the barely imaginable to the manageable.

In the face of management bullying, Starbucks workers are generating creative strategies and showing a gutsy refusal to be intimidated. This is a moment to savor, and to learn from.

It is also a moment to anticipate what it will take to sustain this burst of purposeful activity. The question of union capacity is coming on the agenda, in a big way.

For most of the last few decades, new organizing has been pretty meager, and mostly driven by unions sending out staff to try and stir up interest.

As union density plummeted and public confidence in unions was pummeled, unions have tended to turn away from engaging their members to build people-power, and more towards administering labor relations through having professionals bargain contracts and process grievances.

For many rank-and-file union members, the union means having lawyers and trained staff to “take care of things,” rather than learning to join together and fight. Dependence produces disengagement; the great majority of union members are passive customers rather than union activists.

One result is that unions rarely have enough “capacity”—that is, enough professional staff—to meet the needs of members. And if the current surge were to swell into the wave of organizing we need, it’s hard to imagine that a staff-dependent model could possibly meet the demand.

Perhaps even more important, it’s wholesome for workers to do it themselves: to talk, research, and debate, take each other’s ideas seriously, try new things confidently, and hold each other together as the roller coaster roars along.

Of course there are moments to ask for legal advice, or look to more experienced unionists for some guidance, but if you “contract out” the main work of building the union, you get a weaker organization.

As workers’ habits of self-reliance grow stronger, the problem of union capacity diminishes. Each worker in a unionized worksite can contribute some skill, insight, or work. With hands-on engagement, members feel more informed and motivated to participate in steering the union, and they gain appreciation of the work it involves and the practical implications of program decisions. All of these trends build real capacity.

We have a great chance to learn from workers who are now organizing themselves without much assistance from paid union staff, and who are finding ways to amplify, extend, and consolidate their newfound expertise.

Here are some principles for building capacity and bottom-up power—in your union drive and in the ongoing functioning of your union:

Organize with respect and compassion. If the boss treats you with disregard or disrespect, show how different a union relationship can be. “We led with kindness and care,” said a union activist in the Mesa, Arizona, Starbucks campaign.

In practical terms this means reaching out to include co-workers, even if it takes a while. Instead of trying to “sell” them on the union or pushing them for a commitment, invite their opinions and help them connect with the group. The union space must feel different from the workplace to bring co-workers in—and it can be magnetic.

Take time to solicit co-workers’ questions, then search out answers together. The workplace is often rife with rumors and speculation, which breed doubt and division. Get into the habit of finding out what your co-workers are worried about. Clearly list the questions, and then share the work of researching the answers.

For instance, you could do online searching, talk to a family member who’s in a union, call a friend who has read a lot of labor history, or go to the library. Don’t limit where you look, but do test and verify information before acting on it.

Lean into dialogue, not dictates. Our workplaces are top-down; some of our unions are, too. This is boring, disrespectful, and undermines our self-reliance.

Meetings shouldn’t be lectures by one or two people. Turn them into thoughtful and probing discussions where co-workers can explore their own ideas and merge them towards group consensus.

Secrecy is stifling. We’re often encouraged to act secretly during a union campaign, and there are certainly reasons to keep the boss from knowing too early what you’re up to. But it’s also valuable to encourage an attitude of openness, confidence, and inclusivity.

Our strength is always based on our numbers. The goal should be a steady state of welcoming co-workers in.

Everyone works. Think creatively about all the different ways co-workers can contribute—both during a union organizing campaign and in the future, when your focus shifts to winning and enforcing a contract.

Someone likes to look at statistics; someone else is good at distributing flyers. There are always social media experts, and those who are more comfortable talking in public.

Avoid burnout by keeping horizontal. Never allow work—or power—to centralize around a couple of people. Key people may burn out, fail to share power, or simply give up. The broader the buy-in, the more sustainable the union.

Share expertise—don’t hoard it. It’s normal for a few people to rise up as leaders at any stage of union work. But if you care about sustainability, you will always be looking for opportunities to develop more activists and leaders.

If you’re someone who tends to lead, push yourself to share information and skills with co-workers. If you’re a rank-and-file member who likes to “take orders,” push yourself to learn more and take on a bigger role.

Treat bargaining like organizing. If your union depends exclusively on a lawyer or professional staff rep to bargain a contract, that can prompt members to tune out, weaken the powerful ties among them, and produce long, tedious delays filled with inactivity.

Instead, make every phase of the bargaining process—surveying, researching, writing proposals, prepping for negotiations, negotiating, ratifying the tentative agreement—a new chance to organize.

This means lots of education, active work groups, one-on-one and group conversations, debates among the full membership about tactics and priorities, and inclusive decision-making.

Build sturdy peer-to-peer networks. Find other workers who are organizing, set up regular “peer consulting” sessions, and teach each other what you’re learning.

Starbucks Workers United has set a strong example: workers around the country are already swapping information about management’s union-busting playbook and tactics to resist. Imagine the power if these bottom-up networks begin sharing proposals for bargaining and coordinating actions to hold the line across store locations. Instead of a fragmented (and resource-intense) approach to bargaining, this collaboration could broaden expertise and demonstrate power to the employer.

Some other national examples are the grassroots network Amazonians United and the networks of postal workers, nurses, teachers, and higher education workers who meet regularly over Zoom with Labor Notes help.

But starting locally can be valuable too. In Ithaca, New York, where I live, an assortment of workers in different jobs—some union, some not—began meeting weekly to talk through the challenges they were running into as they organized in their own workplaces. Gradually they sharpened their organizing skills—with no staff and no budget, simply by sharing their experiences and asking each other smart questions. Anyone could do the same.

Ellen David Friedman is a retired organizer for Vermont NEA and a member of the Labor Notes board.

A version of this article appeared in Labor Notes #517. Don't miss an issue, subscribe today.