Israel and the Triangular Crisis of Ukraine, Iran, and Palestine 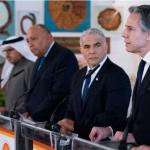 On Monday, the U.S. Secretary of State, Antony Blinken, joined the foreign ministers of Israel, the United Arab Emirates, Bahrain, Egypt, and Morocco for a meeting at Sde Boker, the retirement kibbutz and burial place of David Ben-Gurion, the nation’s first Prime Minister. The meeting had been initiated by the Israeli Foreign Minister, Yair Lapid, with encouragement from Blinken, whose main aim was to reassure the group that the United States is fixed in its commitment to deny Iran a nuclear weapon, and that the not-yet-consummated Iran nuclear deal is the best of available options to do that. “The summit was to showcase a strategic alliance growing out of the Abraham Accords,” the Israeli journalist Henrique Cymerman told me. “To seed the formation of a kind of Middle Eastern nato to contain Iran—deal or no deal.”

Israel and its Arab guests registered a certain discontent. No deal currently being negotiated contemplates constraints on the Iranian missile and drone programs. The leaders of the Gulf states have been increasingly chagrined by the lack of a U.S. response to the various attacks that Iran’s Houthi proxies in Yemen have made on the U.A.E. and Saudi Arabia during the past few months—including, most recently, a strike on a Saudi Aramco facility, on March 25th. Indeed, Saudi Arabia and Jordan were not represented in person at the summit, although their interests were. (“The Saudis were the real enablers of the meeting,” Cymerman said.) According to Axios, Blinken asked Prime Minister Naftali Bennett, at a pre-summit meeting on Sunday, what alternative Israel proposed to a new deal—other than a U.S.-led, preëmptive strike, which Israel continues to prepare for but, particularly given the situation in Ukraine, the Biden Administration would not want to entertain. Bennett reportedly said that he believed Iran might be deterred from enriching uranium to weapons grade if it knew that the U.S. and European countries would intensify sanctions to the extreme levels they have placed on Russia. Since Israel has not joined in those sanctions, one can only wonder how Blinken received the suggestion.

In any event, Bennett had already stated that Israel did not see itself as a party to the Iran deal. Earlier in March, moreover, as if to prove some independence from Washington, the U.A.E. hosted a state visit by Syria’s Bashar al-Assad—who remains in power thanks to brutality abetted by Iran and Russia. The chief U.S. negotiator on the Iran deal, Robert Malley, perhaps signalled acknowledgement of Israel’s developing partnership with the Gulf states when he announced in Doha, on Sunday, that Washington would not yet remove Iran’s Revolutionary Guards from the terrorism-sanctions list, and noted that the signing of the deal was “not just around the corner.”

Two other matters cast shadows on Blinken’s trip: Israel’s occupation of Palestine, especially the continuing expansion of the settlements, and its quasi-neutrality on Ukraine, both of which are a source of tension between Jerusalem and Washington. They may seem unrelated, but each has rendered Israel a sort of outsider among democratic states at a decisive moment. And Blinken chose to finesse both. Bennett has made much of his attempts to mediate between Moscow and Kyiv, but, in addition to remaining aloof from sanctions against Russia, Israel refuses to supply Ukraine with war matériel—in order to preserve, Lapid had said, Russian tolerance for its interdictions of Iranian-backed forces in Syria. Blinken, at a press conference with Bennett, tactfully praised Israel for the solidarity that it has shown with regards to Ukraine: joining the United Nations’ vote to condemn Vladimir Putin’s invasion; implementing new rules to prevent oligarchs from parking yachts and planes—and fortunes—in Israel (though Jewish oligarchs who are Israeli citizens, and have Israeli registered property, may well be able to elide them); setting up a field hospital in western Ukraine; and, last and apparently least, Bennett’s mediation efforts.

The question of Palestine was largely sidelined at the Sde Boker summit, though few doubt that the Saudis and Jordanians made a show of boycotting it largely to avoid providing scenes of senior Arab and Israeli diplomats hobnobbing for the world’s press, while Israeli occupation forces defended the at times violent settler zealots—which might have incited further violence in the West Bank and Amman, as Ramadan begins. Alas, that show seems to have been of little value. Eleven Israelis have been killed in three separate terror attacks during the past week. On Friday, a Palestinian man was shot and killed by soldiers in Hebron.

Blinken, apparently sensitive to this gap in the agenda, spent the afternoon before the summit with Mahmoud Abbas, the President of the Palestinian Authority, who called the gathering a “harsh attack” on the Palestinian people, and decried a U.S. “double standard”: acting against Russia’s claims on the Ukraine, while tolerating Israel’s occupation of Palestinian territories. Jordan’s King Abdullah II visited Abbas in Ramallah, on Monday, as the summit was taking place. Benny Gantz, the moderate Israeli Defense Minister, wanted to join that meeting, but Bennett, the annexationist Prime Minister, nixed the idea. Blinken, for his part, simply restated his endorsement of a “two-state” solution, while acknowledging that is not imminent. In the triangular crisis of Ukraine, Iran, and Palestine, the last issue seems the most deferrable at present.

Or is it? The occupation exacerbates Israel’s hostility with Iran, and the desire to operate against Iran in Syria shapes its diplomacy with Russia. Leaders make strategic, not just transactional, decisions. Deliberately or by default, they define what a country stands for and set its course for a generation. And the leader who made this responsibility most vivid for the Israelis in recent days was not Blinken, or Bennett, but Ukraine’s President, Volodymyr Zelensky, who addressed the members of the Knesset, Israel’s parliament, in an impassioned speech delivered remotely on March 20th. “Indifference kills. Calculation is often erroneous. And mediation can be between states, not between good and evil,” he said. “I am sure that every word of my address echoes with pain in your hearts.” But he wanted to know why Israeli military help had not been forthcoming. “What is it? Indifference? Political calculation? Mediation without choosing sides?” Putin’s aggression, Zelensky said, had made the choice this stark. There is an urgency for democratic solidarity, he suggested, to valorizing a global order in which military power does not determine a neighbor’s fate.

He might have added that Ben-Gurion himself, in his Biltmore Declaration of 1942, envisioned a “Jewish Commonwealth integrated in the structure of the new democratic world.” But Zelensky, a Jew, couched his appeal in a way that he clearly thought would resonate with the leaders of a Jewish state. “The Nazi Party raided Europe and wanted to destroy everything. Destroy everyone,” he told them. “Wanted to conquer the nations. And leave nothing from us, nothing from you.” Then he said, “They called it ‘the final solution to the Jewish issue.’ You remember that. And I’m sure you will never forget! But listen to what is sounding now in Moscow. Hear how these words are said again: ‘final solution.’ But already in relation, so to speak, to us, to the Ukrainian issue.”

Members of Bennett’s inner circle responded furiously to the comparison. The Communications Minister, Yoaz Hendel, tweeted that the Nazis’ genocide of Jews “was also carried out on Ukrainian land,” implying Ukrainian sympathy for it, and said that “the comparison to the horrors of the Holocaust and the Final Solution is outrageous.” The Interior Minister, Ayelet Shaked, went further, telling a conference sponsored by the newspaper Yedioth Ahronoth that, while some Ukrainians had behaved decently during the Second World War, “Ukraine, as a whole, colluded with the Nazis—may their name be cursed—in the slaughter of the Jewish people.” Bennett echoed Hendel and Shaked, albeit in a more compassionate tone. “I can’t imagine being in his shoes,” Bennett said, of Zelensky, but added that the Holocaust should not be compared with anything, and that Zelensky’s rhetoric was “misplaced.”

The discomfort that Bennett’s allies felt was from the messenger as much as from the message. Zelensky hardly needs a lesson on the unique cruelties of the Final Solution: his grandfather fought in the Red Army and lost many family members to Nazi occupiers. Indeed, Zelensky’s fierce liberalism and his ironist’s sense of history seem his tribute to them. But for national-Orthodox Zionists such as Bennett, Hendel, and Shaked, Zelensky’s grasp of nationhood would seem a kind of naïveté. Their lesson, as their erstwhile mentor Benjamin Netanyahu had put it, is that “only the strong survive.” Hendel, who grew up in a West Bank settlement, refused, during the spring of 2020, to allow a center-left government to be formed if it rested on the votes of Arab Israelis. More recently, Shaked scandalized moderates in the government by setting criteria—which have since been overturned—that would allow Israel to absorb only Ukrainian Jewish refugees. As long as Bennett is in power, the Israeli government’s hesitation to align unambiguously with the democratic world has an ideological, not just a pragmatic, aspect.

Zelensky, I hasten to add, thanked the Israelis for the support they have given, and he did not dismiss Bennett’s mediation efforts. But, as the negotiations that resumed this week in Istanbul have revealed, the question is not whether mediation should persist but whether Bennett’s value as a mediator outweighs Israel’s potential contribution to the resilience of Zelensky’s forces, America’s sanctions, and Western solidarity—whether that counterforce against Putin, not mediation, would cause him to inch toward agreement, if inch he will. A source close to Bennett claimed that the Prime Minister’s efforts were appreciated: Putin is no longer insisting on the “de-Nazification” of Ukraine’s regime, code for his being reconciled to Zelensky staying in power. Nor, the source told me, does the Kremlin’s demand for “demilitarization” mean a Russian takeover, though Putin expects Zelensky to recognize Russian annexation of the Donbas and Crimea. The remaining Ukrainian state, for its part, would adopt something like the neutral stance of Austria during the Cold War. Zelensky would need some sort of security guarantors, though, the source said, he “didn’t get many volunteers.” But these shifting conditions have been shaped, obviously enough, by the desperate military courage of the Ukrainian forces. (Last week, the Times reported that Israel, fearing a Russian reaction, refused even to supply those forces with hacking software.)

All of which returns us to the Sde Boker meeting. Given Israel’s appeal to the “democratic world”—certainly to the United States—to anchor a new alliance against Iran, it is hard to see how Bennett justifies his maneuvering on Ukraine. If Iran, for example, were to attack Israel from Lebanon, and Tel Aviv became a site of carnage, no Israeli Prime Minister would be grateful for, say, the French President offering mediation instead of aid. The retired Lieutenant General H. R. McMaster, who briefly served as Donald Trump’s national-security adviser and has worked closely with the Israeli military, told Haaretz that “Israelis ought to be embarrassed” by their government’s proto-neutrality. (“This idea that you hedge with Vladimir Putin to compensate for concerns that the American Administration might attenuate or lessen support for Israel—that’s part of a long pattern and it’s always been wrong,” he said.)

The risks are real: Palestine, Iran, and Ukraine have presented Israeli leaders a strategic challenge. Does Israel prioritize a peace process with Palestinians, defer to American leadership on Iran, take a stronger stance on Russia—define its interests within “the structure of the new democratic world”? The complexity—as Zelensky implied—doesn’t mean that the answer isn’t simple.

Bernard Avishai teaches political economy at Dartmouth and is the author of “The Tragedy of Zionism,” “The Hebrew Republic,” and “Promiscuous,” among other books. He was selected as a Guggenheim fellow in 1987.

The New Yorker is renowned for its in-depth reporting, political and cultural commentary, fiction, poetry, and humor. Subscribe, cancel anytime.