Biden’s Proposed Budget Left Out the Hyde Amendment, and Advocates Hope It Stays That Way 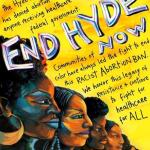 President Joe Biden’s 2023 budget proposal was released March 28, sans a 40-year-old restrictive clause known as the Hyde Amendment. This is the second year Biden has excluded the controversial amendment that denies insurance coverage of abortion for people enrolled in Medicaid. Public support for ending Hyde is at an all-time high, with nearly six in 10 Americans supporting health insurance coverage for abortion, whether public or private. Abortion rights advocates hope the budget will be passed without Hyde and that legislators will not reintroduce the amendment to appease conservative lawmakers, like during the 2022 spending bill negotiations.

“We applaud the Biden administration for its recommitment to ending the Hyde Amendment by removing this decades-old policy, which disproportionately harms people of color working to make ends meet, from its budget,” said Morgan Hopkins, the interim executive director of campaigns and strategies at All* Above All. “It’s a significant step forward to ending a decades-old policy.”

The Hyde Amendment has been included in annual spending bills since 1976, three years after the Supreme Court ruled in favor of abortion rights in 1973’s Roe v. Wade. Since legislators could no longer ban abortions outright, former Republican Rep. Henry Hyde introduced the Hyde Amendment as a rider to the budget. When the amendment passed, he was straightforward with his intention and was quoted saying that the amendment was the best vehicle for restricting abortion access. Since then, the amendment has been included every year and prohibits federal funds from being used to cover abortions for people enrolled in Medicaid, Medicare, and the Children’s Health Insurance Program.

“We often say that [Hyde] is the original abortion ban,” Hopkins said. “We really need to see bold action from all of our elected officials to end this harmful policy.”

“Systemic racism, economic insecurity, and immigration status multiply the barriers to abortion care,” Hopkins said. “Folks who are enrolled in Medicaid are disproportionately people of color because of the way that capitalism and systemic racism work. Abortion care is an economic justice issue and a racial justice issue.”

In a testimony given to We Testify, an organization that amplifies abortion experiences, Brittany Mostiller, a 35-year-old woman from Illinois, said she had to figure out how to pay $900 out of pocket—more money than she made in a month—for an abortion because Medicaid would not cover the procedure. She was 22 years old at the time, a mother to three daughters, working a part-time job at a grocery store, and she knew she could not afford another child “physically, emotionally, or financially,” she said in her testimony.

“The decision to have an abortion was the easy part—but I couldn’t afford it,” Mostiller said in her testimony.

It took Mostiller several weeks to save up for the procedure in Illinois, which meant she had to wait until further in her pregnancy before she could afford the $900.

“This was a really challenging and disheartening experience,” Mostiller said. “Millions of people live in states that are hostile to abortion. I experienced firsthand the panic and worry of not being sure of whether I’d be able to get the abortions I wanted because I couldn’t afford them. Medicaid insurance has been a health care lifeline for me and my family—including when I chose to become a parent. We need to make sure that everyone on Medicaid is able to decide if, when, and how to grow their families without fear of that decision being taken away from them simply because insurance won’t cover it.”

Since Mostiller’s abortion, Illinois has become one of the 16 states that allows people enrolled in Medicaid to have abortion coverage. People in the other 34 states and the District of Columbia have to pay for the procedure themselves or access abortion funds to pay for the costs of abortion, which could include the procedure, medication, transportation, and lodging if they need to travel.

“There is a web of barriers to abortion care that would also have to be addressed for people to truly be able to access care,” Hopkins said. “That includes making sure that clinics can stay open and making sure that if people have to travel, they can move freely. Ideally, people wouldn’t have to travel far for abortion care. So it’s one step forward, and we know that there’s larger changes that would still have to happen for people to fully be able to access abortion care.”

As the fate of abortion rights hangs in the balance with the upcoming Supreme Court decision on abortion in June, and conservative states passing abortion bans at an alarming rate, abortion rights advocates see the removal of the Hyde Amendment as a win to guarantee and expand abortion access but hope that Congress and the Senate will support the momentum. House Majority Leader Steny H. Hoyer hopes to pass the 2023 appropriations bill through the House of Representatives by the end of June.

“With states like Texas, Idaho, Florida, and many others pushing abortion care out of reach, this critical moment we are in demands bold action from all of our elected officials,” Hopkins said. “We now look to Congress to carry this momentum and pass federal spending bills without Hyde and coverage bans. Abortion justice can’t wait.”

Alexandra Martinez is the Senior News Reporter at Prism. She is a Cuban-American writer based in Miami, Florida, with an interest in immigration, the economy, gender justice, and the environment. Her work has appeared in CNN, Vice, and Catapult Magazine, among others.

Prism is an independent and nonprofit news outlet led by journalists of color. We report from the ground up and at the intersections of injustice. Together, our journalists go where justice requires.  Activists, thought leaders, decision-makers, and all those who believe in justice for all come to Prism for deep reporting and honest insights on the most pressing injustices of our time—delivered through the lens of those who are most impacted.

Sign up for Prism’s newsletter to get first access to news and analysis that makes you think—and act.