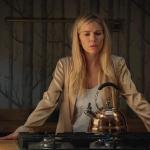 Midway through Netflix’s brisk new drama Anatomy of a Scandal, there’s a scene that’s become a familiar staple of prestige TV—a car gliding away from a courthouse, containing a powerful man who’s behaved badly and his steadfast, suffering wife. In the case of Scandal, the man is James Whitehouse (Rupert Friend), a Tory M.P. who’s been accused of rape by a subordinate he was having an affair with, and his wife Sophie (Sienna Miller), who until now believed their 12-year marriage was on solid ground.

In the taxi, Sophie asks James if his lawyer is prepared to cross examine his accuser. “She’s chomping at the bit,” says James. Sophie replies in a quiet voice, without looking at him: “It’s champing. It’s champing at the bit.” There’s a universe of subtext in Miller’s deadly line reading, a raw edge that shows that Scandal, despite being the latest in a long line of prestige TV shows about wealthy white mothers with problematic husbands, still has something interesting to say about midlife marriage, ambition, and family.

The knock on this flourishing minigenre, a list that includes The Undoing, Big Little Lies, and, to an extent, The White Lotus, is that they choose to look at these questions through the prism of extreme wealth, and that’s fair criticism. But these series are also telling stories about female characters in their 40s and 50s in a way that was simply not the case when I was growing up in the ’80s and ’90s, and I’m here for that.

The reason for this welcome new focus is partly a group of gloriously talented A-list actors north of 40 like Reese Witherspoon, Nicole Kidman, and Kate Winslet who wield creative power both in front of the camera and behind it. But it’s also because the zeitgeist has shifted. The having-it-all career feminism of the ’80s and ’90s has soured, leading to different kinds of stories about women onscreen. What does midlife ambition look like when you also have children to care for? What does a relationship look like a decade or two on, versus in the first flush of romance? What does it mean to stand up for yourself when your life is so entwined with others?

When Anatomy of a Scandal’s Sophie corrects her husband in the taxi, it’s a turning point. A small one, yes, but the first indication of a tectonic shift, where her trust in James is weakening. We know Sophie well enough at this point to understand this kind of dig is unlike her, and while it’s petty to correct someone’s grammar, for Sophie, it feels like an act of survival. (I can easily imagine Silda Wall Spitzer saying something similarly cutting to Eliot Spitzer after his press conference about being Client Number 9). Sophie clearly feels anger and disgust with herself that she is in this position, but she’s also experiencing the first whiff of disgust for James. You can feel her thinking: Who is this person I’ve built my life around, really?

That’s a terrifying question, because Sophie is not a dupe. She may have ignored or elided certain things about her husband, but he does really love her, and he presents himself as a good man. When he asks, during the trial, if she still loves him, she says, “Yes, if you’re still you.” Her response gets at the heart of all long term relationships, which at their core are built on a leap of faith. Will you grow into the person I think you will? Are you still the person I fell in love with?

Sophie thought James was, and so she dimmed her own star to support him, a compromise we may judge or scoff at, but one that happens over and over again in marriages because it’s really hard to raise kids when both parents are burning their ambition at maximum wattage. (Adding a few logs to the fire, Sophie’s mother-in-law helpfully explains that Sophie prioritizes her children because she comes from “a broken home.”) That kind of marital compromise has its sacrifices, but also its terms—trust, belief in your partner, mutual respect. When James shows the first hint of peevishness at the idea that Sophie might not accompany him to the trial, it’s clear he expects her to fall in line the way she always has, without realizing the ground between them is shifting. In another brief, fascinating scene, Sophie tells James she regrets leaving her career and might want to start working again. “Now?” he asks, incredulous, and she clarifies she means after the trial. “I think that’s a great idea,” he responds, carefully, with a politician’s grasp of how much leverage he does and does not have.

It reminded me of a scene that still haunts me from Big Little Lies, the monster HBO hit about a group of first grade mothers in Monterey that set this wave in motion. After Celeste (Nicole Kidman) successfully defends the local theater’s right to put on Avenue Q, she admits to her friend Madeline (Reese Witherspoon) that after giving up her career as a First Amendment lawyer to take care of her sons, “It’s not enough. It’s not even close.” It’s a breathtakingly honest statement, because while she obviously adores her children, it speaks to the ambivalence so many women feel but cannot say aloud for fear of being judged. The honesty is all the more powerful because Celeste is keeping secret that her husband Perry is physically abusive.

What set Big Little Lies apart from its peers is the way it used the prism of privilege to examine both the undeniable advantages and the limits of that privilege. No one can imagine Perry is viciously beating Celeste, because that sort of thing simply doesn’t happen to highly educated, beautiful, wealthy women—except that it is. By flipping the script, Lies forced us to confront our biases about who can be a victim of abuse. In Scandal, however, it is all too believable that someone like James Whitehouse, with all his atomic charm and charisma, has crossed the line.

The idea that these kinds of stories are only being told against the backdrop of ritzy parties and dazzling real estate (I admit I did become slightly obsessed with the wallpaper in the Whitehouses’ kitchen) is also not the whole picture. Shows like Mare of Easttown and the even darker Yellowjackets take a hard look at midlife relationships and ambition against a background of trauma and loss. In Mare, Kate Winslet dials down her star power just enough to convincingly play a detective, mother, and grandmother who’s lost her son to suicide, in a town hollowed out by poverty and drugs. Unlike the gleaming police procedurals we’re used to, her work trying to solve a murder is plodding and low-tech, but what I love is how, like any harried working mother, Mare projects the sense that yes, this is a job, but one she knows well and is good at. When the department brings in a younger detective who made a name for himself on a high-profile case, her anger is palpable—here’s some hotshot coming in who doesn’t know half of what I know. That resonates. And while the only thing Yellowjackets has in common with Anatomy of a Scandal is protagonists who are in their 40s, watching these women navigate the trauma they’ve been through by mimicking the motions of domestic life, or flogging their career while compartmentalizing everything else, is similarly mesmerizing. The fact that the characters are played by ’90s icons I watched growing up—Juliette Lewis, Christina Ricci, Melanie Lynskey—is icing on the cake.

But perhaps the reason gleaming privilege is more the norm for these shows is not just because Americans will always be obsessed with the idea of wealth and success, but also because—stick with me here—storytelling lives in extremes. While The White Lotus, one of the first shows made entirely during the pandemic that became a legitimate watercooler hit, is the darkest satire about wealth and privilege I’ve ever seen, the lives of the superlucky have always fascinated us. Someone like Mare, or Natalie from Yellowjackets, has exactly zero illusions about how life works, how it can crush you with a randomness that spares no one. But for Sophie, that knowledge requires an actual journey. In Anatomy of a Scandal, Sophie speaks several times about how lucky their family had been until now, and the expression on her face, when James insists it was hard work instead marks a moment in their marriage that many will recognize–when one partner has accepted and acknowledged a new reality the other refuses to. (Miller’s subtle use of body language to show how she shifts away from James is extraordinary.)

In the final episode Sophie admits that if she’s traded on the currency the world told her was hers, “that’s what I was raised to do,” and her simple statement, her refusal to try to defend or spin it,  shows that rarest of things, self knowledge. To simply dismiss Sophie as an entitled, clueless wife–as many critics understandably sick of this trend do–is far too simplistic. She is flawed, but she is not feckless, and most astonishingly, she actually changes. Sophie’s decision to burn her husband in order to ensure her children don’t become like him takes guts, and it’s a fascinating, legitimate surprise. Humans are complex. The older you are, the truer that becomes.