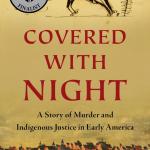 Early North American colonial history often gets short shrift in the standard American history classroom. Once the pilgrims have celebrated their first Thanksgiving, the syllabus typically vaults forward in search of the excitement and glamour of 1776. While the era between these two events may not make the marquee of American history, Nicole Eustace nevertheless shines a revealing spotlight on it in her book Covered with Night: A Story of Murder and Indigenous Justice in Early America. Eustace focuses on a single act that occurred roughly one hundred years after Plymouth Rock and fifty years before “the shot heard ‘round the world.” Her multi-layered exploration of the far-reaching consequences of this crime reveals forgotten treasures in America’s attic.

In the summer of 1722, deep in the Pennsylvania woods, Sawantaeny, a Seneca hunter and warrior, welcomed traders John and Edmund Cartlidge to his home. The Cartlidge brothers plan to ply their host with rum to try to cheat him out of his valuable animal skins. When John Cartlidge becomes frustrated that his scheme isn’t working, he assaults Sawantaeny. The conflict escalates, and the Cartlidge brothers beat Sawantaeny to death with his own gun.

For Pennsylvania Governor Sir William Keith, this is less a tragedy than an “inconvenient crime.” Keith wants to guard the fledgling colony’s financial interests against the threat of war with the local Native peoples like the Seneca and the more distant but powerful Five Nations of the Haudenosaunee, a regional confederation of Iroquoian tribes. He attempts to ameliorate the situation by subjecting John and Edmund Cartlidge to the rigors of the new English penal code he recently signed into law. If convicted, the brothers would be transferred directly from their cramped prison cell in Philadelphia to the gallows.

But Keith and his governing council are soon dismayed to learn that their efforts to smooth all this over have fallen short. Native interpreters and diplomats Satcheechoe and Taquatarensaly tell them that they must free the Cartlidges both from prison and from the threat of execution. Instead, to make things right Keith must journey to meet with the leaders of the Five Nations to “cover the dead,” or perform a series of mourning rituals to address the grief of the bereaved and offer reparations to his kin and community.

Eustace plunges us not only into this conflict but into the era that engendered it. She painstakingly sketches in the details of eighteenth-century colonial America, from the Cartlidges’ sweltering jail cell where they “bake  like bricks” in the summer heat to wealthy merchant John Dickinson’s opulent home, which boasts an abundance of furniture made out of rare and costly mahogany: “couches and chairs and stools; clothes presses, seven chests of drawers, and ten tables.”

As plentiful and evocative as these details are, they are not merely set dressing. Instead, Eustace uses these items to unveil the mechanisms of colonialism. Of Dickinson’s mahogany furniture, she remarks, “Few if any take in the weight of all the dark wood displayed around Dickinson’s home and think of the expert knowledge and heavy labor of enslaved Africans that was necessary to find and fell the trees.” Similarly, an indentured servant giving testimony on the murder wears clothes made of osnaburg, “a rough fabric reserved for indentured and enslaved laborers that causes great discomfort to the body.” Surveyors carving up the forests for private ownership use a “Gunter’s chain” as a standard of measure: “On horseback or on foot, in fair weather and foul, surveyors string their way westward toward the heart of the continent, stretching their chains over the ground as if taking the land itself captive.”

Details like these do paint a picture, but Eustace tells even better than she shows. She draws from dozens of primary sources and hundreds of secondary ones, yet seamlessly weaves them into a cohesive, compelling narrative full of intrigue and pathos. Sailing smoothly across the surfaces of ledgers and meeting minutes and treaties and treatises, she anchors us to these antique texts with occasional well-chosen quotes but always goes deeper to reveal the motivations, assumptions, and stratagems lying beneath the words. Her commentary both offers essential context for the book’s events and infuses them with energy. When colony secretary James Logan’s account of a meeting ends abruptly, Eustace writes, “His account ends there, sharp as the slap of a riding crop.” She also adds depth by explaining what is not in the record, as when she describes a hastily-written letter from a local official about the crime:

‘Sir,’ a man named Maj. John Bradford begins a letter to a correspondent, too rattled to remember to use a more polite salutation. . . . He ought to begin by explaining that he has key news to share. But he has no time to think about the craft of composition right now.

As for Eustace’s own text, readers will find that it frequently revisits the different approaches to criminal justice in early colonial America, drawing repeated distinctions between rigid, albeit unfairly applied, British law (perpetrator-focused, reprisal-oriented, punishment-driven) and the justice of the Haudenosaunee (victim-focused, restitution-oriented, harmony-driven). In this way, Eustace mirrors Satcheechoe and Taquatarensaly, who were faced with the difficult task of explaining this alternative justice system and its value to Keith and his council. Having been thoroughly spoilered by the subsequent three hundred years, we can guess the colonists’ reactions to their efforts, but Eustace manages to maintain the narrative tension. After each attempt, we wonder: Do they get it? How about now? Still no? Okay, what about this time? In Eustace’s savvy retelling, the colonists’ continuous refusal to truly hear and engage with their Native counterparts manages to be both entirely predictable and yet utterly astonishing.

While this is deeply frustrating, we are not left entirely unsatisfied. The Great Treaty of 1722 records the progress that Satcheechoe, Taquatarensaly, and other Five Nations leaders did achieve in demanding accountability according to their cultures’ values. But what does the oldest continuous treaty in the U.S. have to offer us now, with colonists having long since reached the other shining sea, bringing with them a vicious, destructive penal system?

By formally documenting a more humane, healing vision of what justice could be—and once was—in this country, the treaty further fortifies current social justice movements centering prison abolition, restorative justice, and reparations. Though these movements are seen by many as radical, Eustace’s revealing work shows us just how traditional their roots really are.